Having previously identified as a transvestite, the 'Lego Batman Movie' star opens up about settling into the using of 'she' and 'her' pronouns during Britain's Portrait Artist of the Year show.

AceShowbiz - British comedian Eddie Izzard wants to be referred to using the pronouns "she" and "her" going forward.

"The Lego Batman Movie" star, who has long worn women's clothing and makeup, previously identified as a transvestite and insisted she would answer to "she" or "he", but now Izzard is settling into a more feminine persona - and would like that to be reflected in her media coverage.

"I'm gender fluid. I just want to be based in girl mode from now on," Izzard told Britain's Portrait Artist of the Year show.

"It feels great," she shared of her new identity, "because people just assume that they just know me from before."

Izzard went on to brand her "little transition period" a "positive" step in society. "Well, I try to do things that I think are interesting, and this is the first program I've asked if I can be 'she' and 'her.' The transition period," she said before sharing a little advice for viewers, adding, "(You have) one life, live it well."

The news won Izzard huge praise and support from fans online, with one tweeting, "I woke up to see #EddieIzzard trending and feared the worst. I was delighted to see that she's living her best life and it's just some keyboard crybabies melting down over her pronouns." 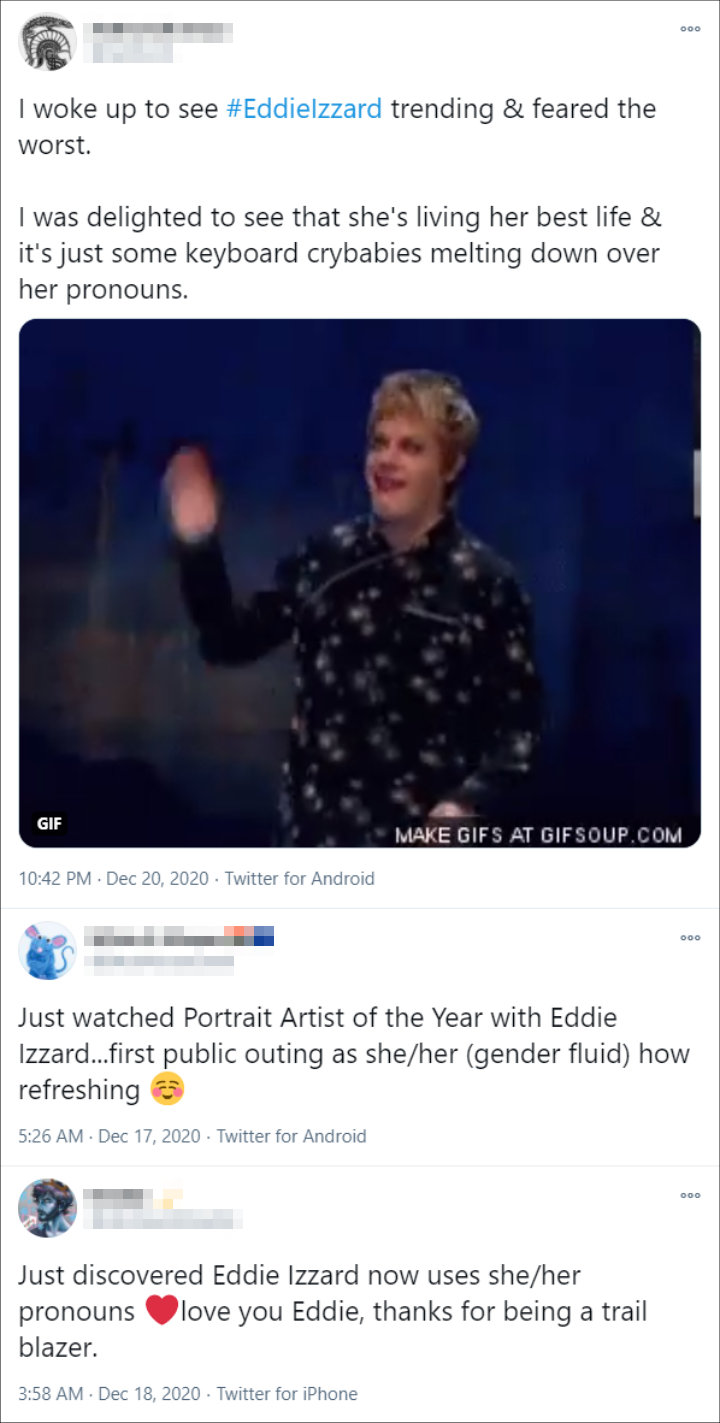 "Just watched Portrait Artist of the Year with Eddie Izzard...first public outing as she/her (gender fluid) how refreshing," remarked a second, and another posted, "Just discovered Eddie Izzard now uses she/her pronouns love you Eddie, thanks for being a trail blazer (sic)."

Back in a 2019 interview with Windy City Times, a Chicago LGBTQ publication, Izzard revealed that she had "boy mode and girl mode. I am kind of gender fluid." She went on to say, "I want to express both sides of myself, which has always been there. I am a tomboy and tomgirl kind of person."