Bringing to light the global spread of police brutality, the 'Insecure' actor and Black Lives Matter activist shares a video of his scary encounter with officers in the city of Cartagena.

AceShowbiz - Janelle Monae and Susan Sarandon have been left outraged by the brutal treatment of Kendrick Sampson by Colombian police. Just hours after the "Insecure" actor shared a video of him being punched by an officer while he was in the city of Cartagena, the two Hollywood actresses stepped forward to voice their support for him.

"This happened to my friend who happens to be a huge advocate for protecting black lives," Janelle wrote when reposting Kendrick's video in her Instagram Story post. "It's triggering. It's unacceptable. Accountability must take place. There is a global abuse of power in the police force. That must be stopped. Love you and stand with you. So sorry I'm heated."

Also making use of her Instagram Story account to put the global problem under the spotlight was Susan. Along with the clip from the Tuesday, December 15 incident, she pointed out, "@kendrick38 being assaulted by police in Cartagena…a daily reality for POC not just in the US but all over the world. Standing with you my friend." 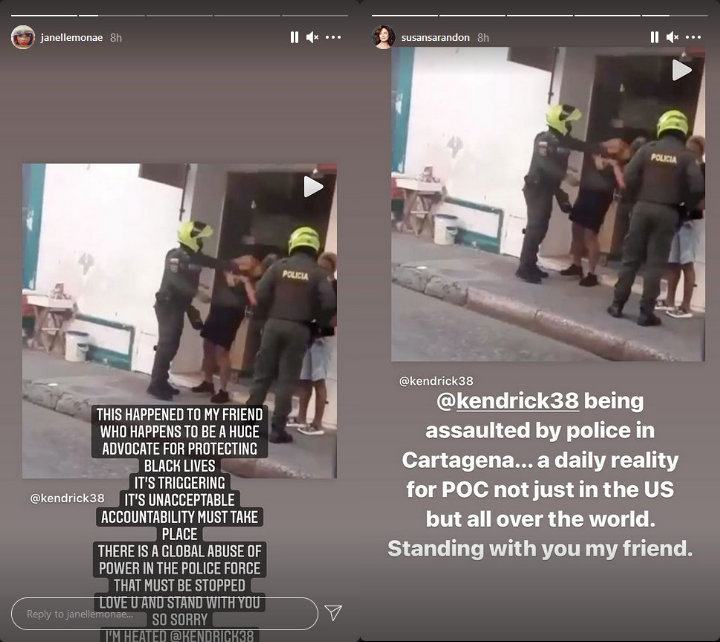 Aside from Janelle and Susan, the likes of Lena Waithe, Hayley Kiyoko and Sophia Bush have all voiced their support for Kendrick. While Lena and Sophia reposted Kendrick's video on their individual Instagram Story pages, Hayley was more vocal by writing down, "@kendrick38 did not resist and yet the officer STILL pulls out his gun. This is a global problem and it has got to stop." 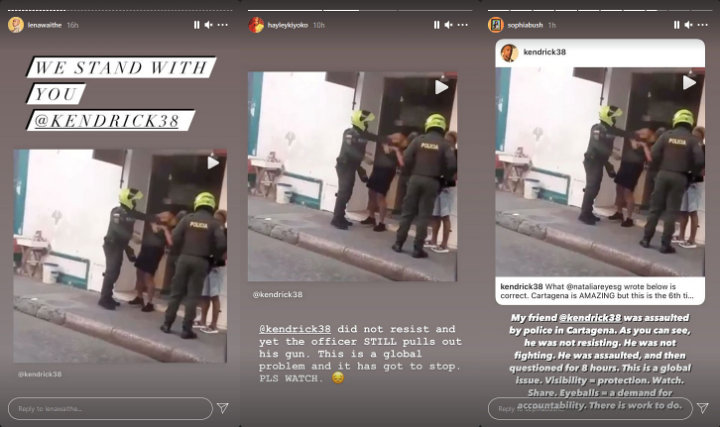 Kendrick brought to light his scary encounter by reposting an Instagram video first posted by his friend Natalia Reyes. Along with it, he detailed, "What @nataliareyesg wrote below is correct. Cartagena is AMAZING but this is the 6th time I was stopped in 5 days. It happens to Black Colombians often."

"I'm told stopping is policy but what is NOT is they reached down my underwear aggressively, slap my arms 5 times hard, punch me in my jaw and pull his gun on me. He then cuffed me and dragged me through the streets," he continued recounting. "I did not resist any legal procedure. Thank u for posting @nataliareyesg & for helping me through this. And to the person who recorded this."

Hours after the incident, Kendrick revealed that he was still dealing with the aftermath. "For those who are asking, I am still with the police. Different police. Their police captains, I think," he offered an update via Instagram Story. "They are taking my account of what occurred (supposedly) to 'discipline' the officers."

"This has been 8 hours of this s**t. Translating etc," he pressed on with more details. "I got to finally leave, eat a little and then their captains (3 of them) waited inside my hotel to get my account. I'm tired as f**k. Hope this will be over soon. They are also asking me to confront and identify the officer tonight! I don't trust this s**t." 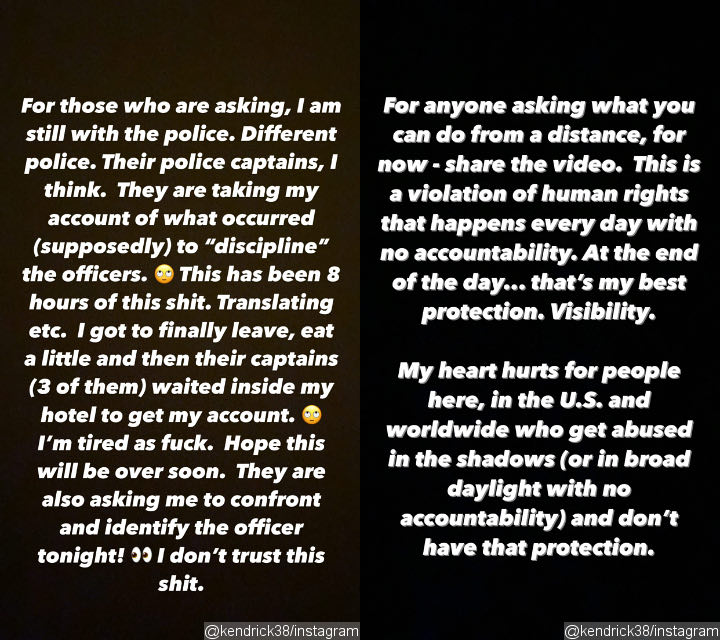 Kendrick Sampson detailed the aftermath of his scary encounter with Colombian police.

In the initial post of the video, Natalia dished, "POLICE BRUTALITY, this is my friend Kendrick Sampson @kendrick38, an actor and dedicated activist of the @blklivesmatter movement in the United States, today this happened to him here in Cartagena and everything hurts, not only because he is a friend but because that is the day to day of many, because we got used to this, and that is NOT okay, it's not normal."