The feud between Bryce and the 23-year-old rapper starts after the latter taunts the TikTok star with a new song featuring explicit lyrics about Bryce's girlfriend Addison.

AceShowbiz - Bryce Hall and Lil Yachty are involved in a heated feud on Twitter. The TikTok star and the "Oprah's Bank Account" rapper started throwing shades at each other on the blue bird app after the latter taunted Bryce with a new song in which he rapped about Bryce's girlfriend Addison Rae. Now, the feud escalated even further after Bryce revealed that the rapper's team apparently wanted him and Addison to be on "E-ER" music video.

Bryce posted screenshot of a DM from someone who seemed to be in the rapper's team. "Yo, would you and addison be down to be in the music video for the e-er song yachty. Lmk what you guys would want," the person wrote to Bryce, before convincing that it "would be some funny s**t."

However, Bryce seemingly didn't want to have anything to do with the rapper and his answer was definite. "F**K no LMAO," he simply replied. Sharing the picture on Twitter, he tagged Yachty, who quickly responded, "Listen kid... I wouldn't have you in my video if my life depended on it. Not my song."

Yachty then addressed his controversial lyrics on DJ Scheme's "E-ER". "ALSO I did this verse 4 months ago. relax bro. It's not that deep," the 23-year-old spitter fired back. "Go take some shirtless photos or some." 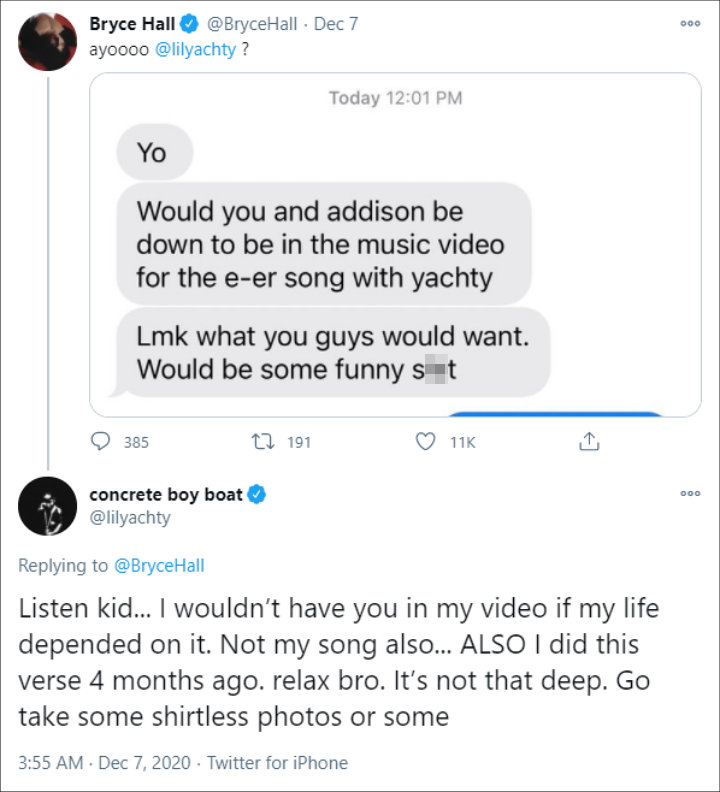 Bryce Hall and Lil Yachthy were feuding on Twitter.

The feud between Bryce and Yachty started after the latter responded to Bryce's tweet in which he asked for some song recommendations. Tweeting to the social media personality, he shared a screenshot of the song alongside a caption that read, "At this part specifically actually."

He referred to the part where he rapped explicitly about Addison. "I want Addison Rae to become my doctor and check on my privates/ Put her in a skirt and a scarf like pilot/ He didn't make it past the first clip like a polyp," so he rapped, prompting backlash from online users. 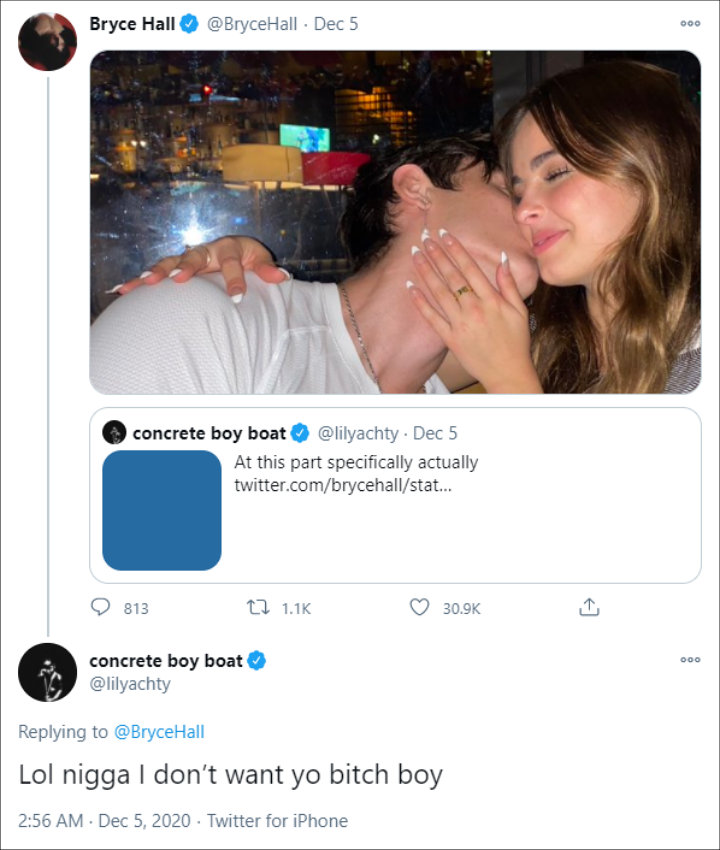 Bryce fired back at Yachty.

Seemingly unfazed by the sudden diss, Bryce clapped back by replying to Yachty's tweet with a snap of himself and Addison cuddling up to and embracing one another. "Lol n***a I don't want yo b***h boy," Yachty responded.

Rita Ora Almost 'Forgot' of Past Romance With Rob Kardashian