The TikTok star and the YouTube personality grab and shove each other after the ex-boyfriend of Addison Rae charged at the latter at Fred Segal in West Hollywood.

AceShowbiz - Bryce Hall is not ready to bury the hatchet with Austin McBroom. The TikTok star, who was involved in a brawl with the YouTube megastar at a press conference, challenged the latter to have a "better fight."

Bryce dared Austin via Twitter on Tuesday, May 18. "glad your security was there to push me off of you ! after im done with you i got a better fight next so im not worried," he tweeted, after the latter poked fun at him by writing, "Come to find out @brycehall is as strong as my 10 month old baby boy. Steel boy you wanna fight him instead of me." 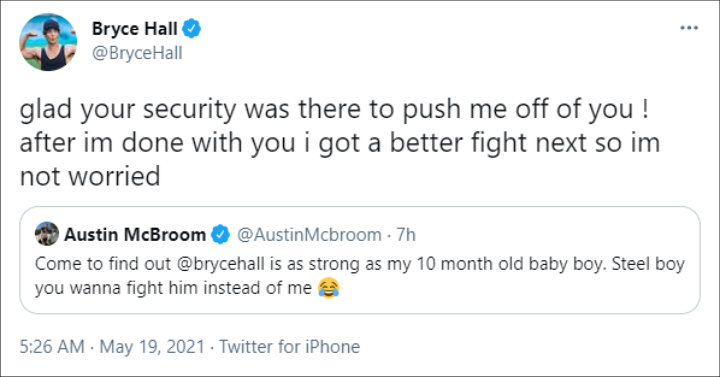 Bryce Hall challenged Austin McBroom to have a 'better fight.'

The trash-talking came after the two grabbed and shoved each other while promoting their upcoming boxing match at Fred Segal in West Hollywood. On what caused the tussle, the ex-boyfriend of Addison Rae first charged at the YouTuber while the latter was talking. Fortunately, their teams managed to separate after things got more chaotic.

Following the brawl, Austin told TMZ, "He out here trying to wrestle. We got a fight June 12 -- he's wrestling me!" He then stressed, "If he does that bulls**t on June 12, he's getting his ass knocked out. That's what's happening."

The former college basketball player, who has 19 million subscribers on YouTube, also made it clear that the fight was not fake. "None of this s**t was staged. This s**t is real. He's getting knocked the f**k out," he raged.

Austin and Bryce are scheduled to fight at Hard Rock Stadium in Miami on June 12. Bryce himself previously revealed that he wanted to beat Austin because if he comes out with a K.O., he will buy a new house for his mother.

"That's like, my mom's house right there," the 21-year-old told the outlet outside Toast in Los Angeles. "I'm gonna buy my mom a house right after the fight. And, that knockout is my mom's house ... that's how much it means to me."