The 'Real Housewives of Miami' alum's Instagram Story post directed at her haters arrives after she posted about praying 'for anyone dealing with heartache' while she's dating a married man.

AceShowbiz - Larsa Pippen's attempt to muffle criticism directed at her has backfired. The former reality TV star has shared a compassionate message to her haters following a wave of backlash sent to her over her relationship with married NBA star Malik Beasley.

Seemingly trying to take the high road, the former wife of basketball legend Scottie Pippen shared some advice for the sake of her haters. "Maybe spend more time loving and less hating! It's not changing my life but it might change yours," the 46-year-old posted on her Instagram Stories on Monday, December 7. 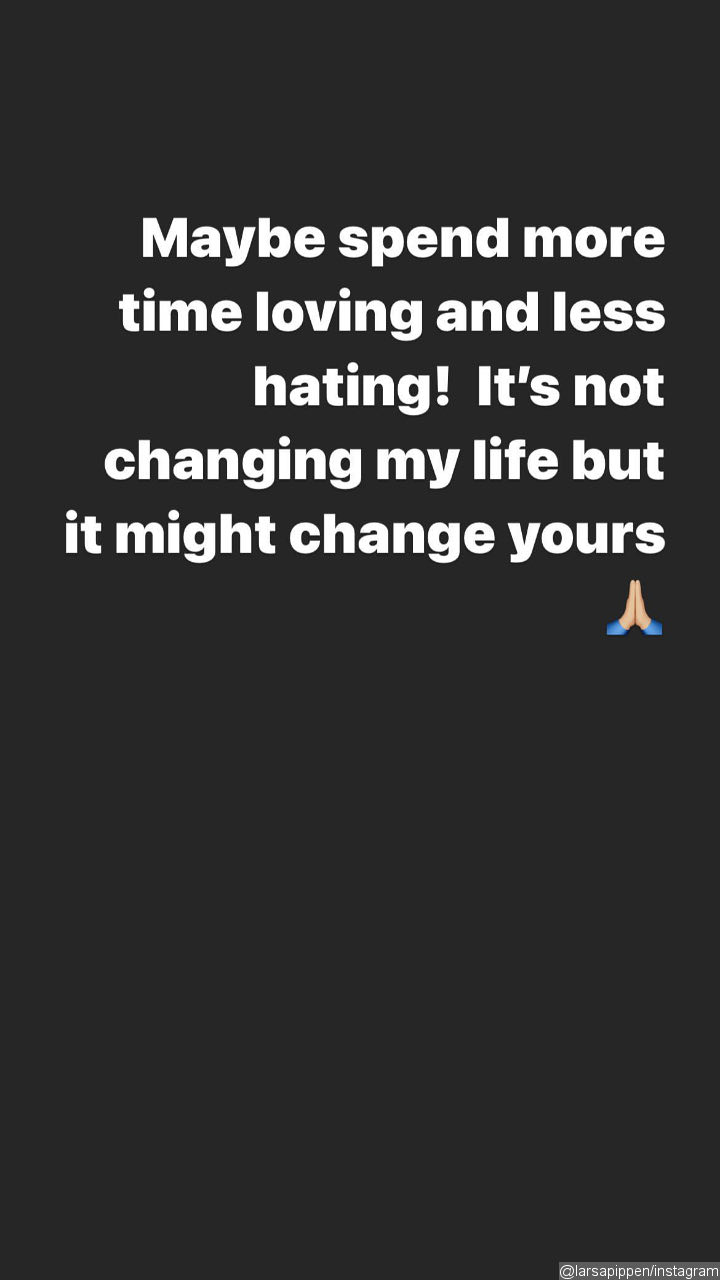 Larsa Pippen advised her haters to be more compassionate.

But none is taking her advice. Instead, she only earned more criticism for trying to silence her haters, while people believe that she deserves the chastisement. "Yo her logic is hilarious," one person mocked her for her post.

"Close your legs to married men!! *NeeNee voice," another advised her back. A third person commented, "SMH," before suggesting, "She gotta chill..." A fourth one pointed out Larsa's hypocrisy as noting, "I'm sorry wasn't this the same girl women who was up here bullying Jordyn?? Make this make sence (sic)."

Someone compared the mother of four to Instagram thot Celina Powell. "the Celina Powell of the NBA," the said person dubbed Larsa. Another trolled her, "I wonder where y'all steal these quotes from. Y'all be having them for a while huh?"

Larsa's compassionate message to her haters arrives one day after she posted about praying for the broken-hearted ones. "God, I pray for healing & comfort for anyone dealing with heartache," read the quote on Larsa's feed.

"I pray that they find refuge in You in the midst of their pain," it continued. "May You continue to give them the strength to keep going. To push through these dark moments & know You are with them every step of the way." Similar to the reactions she received with her latest post, Larsa was also slammed for her "praying" post.

Meanwhile, it seems that Larsa is trying to make amends with her son Scotty Pippen Jr. after he's seemingly hurt by her dating scandal. A source tells Us Weekly of the 20-year-old Vanderbilt basketball player's relationship with his parents, "Scotty Jr. is focusing on basketball and talks to his mother and father daily."

Larsa and Malik were spotted holding hands in Miami on November 23, though the photos only surfaced on Tuesday, December 1. The Minnesota Timberwolves player is still married to Montana Yao, who claimed to be blindsided by the 26-year-old athlete's relationship with "The Real Housewives of Miami" alum. The Instagram model reportedly has filed for divorce from her husband.

Larsa Pippen Joins OnlyFans: 'I Don't Care What Anyone Says'