For the upcoming revival, the Golden Globe-winning actor will once again play Dexter Morgan, a complicated and conflicted blood-spatter expert for the Miami police department at day and a serial killer at night.

AceShowbiz - A revival of "Dexter" is heading to Showtime. The upcoming 10-episode new series will see Michael C. Hall reprising his character as serial killer Dexter Morgan who earns him a Golden Globe back in 2010.

Showrunner Clyde Phillips will also be back to produce the limited series alongside Hall, John Goldwyn, Sara Colleton, Bill Carraro and Scott Reynolds. It has also been reported that "Dexter" revival will go into production in early 2021 as it eyes for a tentative premiere date of fall 2021.

" 'Dexter' is such a special series, both for its millions of fans and for Showtime, as this breakthrough show helped put our network on the map many years ago," Gary Levine, who shares the President of Entertainment role at Showtime with Jana Winograde, said. "We would only revisit this unique character if we could find a creative take that was truly worthy of the brilliant, original series. Well, I am happy to report that Clyde Phillips and Michael C. Hall have found it, and we can't wait to shoot it and show it to the world!" 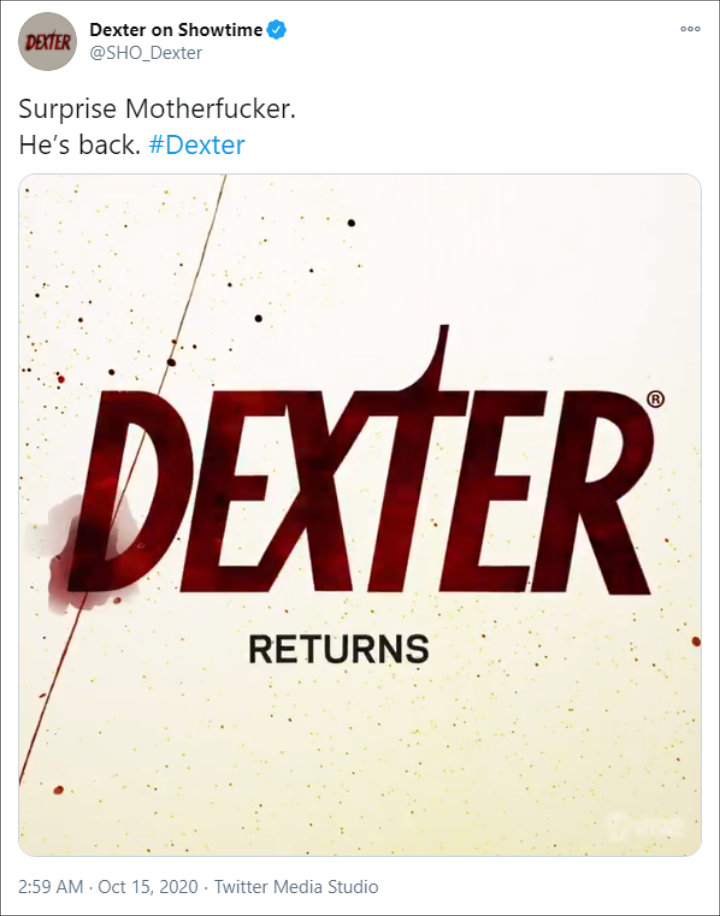 While plot for the upcoming reboot is currently in under wraps, fans would remember that season 8 finale of the original show, which aired from 2006 to 2013 on the network, was widely panned as it featured Hall's Dexter faking his death. He lived under a new name in Oregon after wrecking his boat and escaping from a hospital along with the body of his sister, who had been shot and left in a coma. He also sent his son Harrison and love interest Hannah to live in Argentina.

Dexter is described as a complicated and conflicted blood-spatter expert for the Miami police department at day and a serial killer at night. During its eight-season run, the acclaimed show earned multiple Emmy nominations.

It remains to be seen if other cast members of the original show will return to play their characters in the 2021 revival.

Jennifer Carpenter to Make a Return to 'Dexter' on Revival Series

John Lithgow Is Back for 'Dexter' Revival