The N.W.A. founder responds after a Twitter user calls him out for working with Donald Trump's team to help develop 'the platinum plan' with his Contract with Black America.

AceShowbiz - The cat is out of the bag. Ice Cube has been confirmed to be assisting Donald Trump's team in his reelection campaign with his Contract with Black America (CWBA), which he has been preaching as a solution to issues pertaining to the Black community.

Cube's involvement with the Trump campaign was revealed by one of the president's staffers, Katrina Pierson, who tweeted on Wednesday, October 14, "Shoutout to @icecube for his willingness to step up and work with @realDonaldTrump Administration to help develop the #PlatinumPlan." She added in her tweet, "Leaders gonna lead, haters gonna hate. Thank you for leading!"

Following Pierson's tweet, Cube took to his own Twitter page to explain that he was approached by both Trump and Biden's teams about the CWBA, but he ultimately went with Trump's offer because the former is willing to act sooner than the latter.

"Facts: I put out the CWBA. Both parties contacted me. Dems said we'll address the CWBA after the election," he stated in his post. "Trump campaign made some adjustments to their plan after talking to us about the CWBA."

Needless to say, Cube's move has resulted in some backlash from social media users, as he has been known as one of the most vocal critics of Trump and his administration. One person lamented on the blue bird app, "My Hip-Hop HERO @icecube is working with the Darkside. I haven't felt this low since Kobe passed. HEARTBREAKING. Cube, I'm not sure you understand how much we value your voice. And when we see you 'jumping the shark,' it KILLS us. Especially in 2020."

Noticing this comment, Cube quickly responded in his defense. "Every side is the Darkside for us here in America," he wrote back to the said user. "They're all the same until something changes for us. They all lie and they all cheat but we can't afford not to negotiate with whoever is in power or our condition in this country will never change. Our justice is bipartisan." 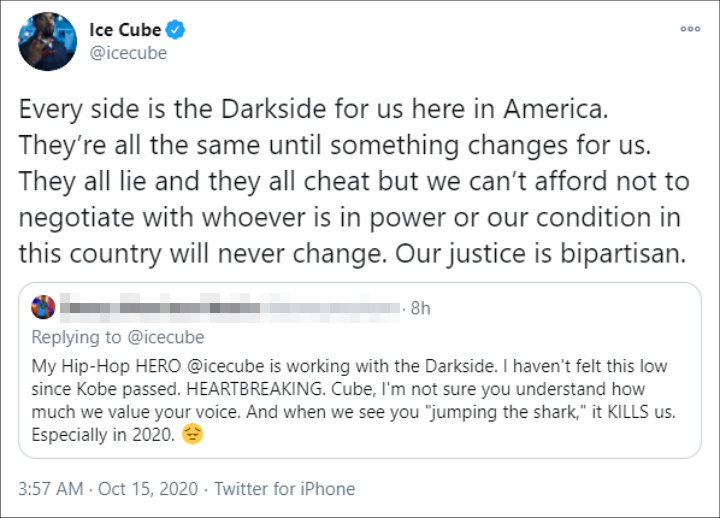 The rapper defended himself amid backlash.

Cube introduced Contract with Black America in early June. It's his plan for the nation to address systemic issues facing the Black community, which includes an array of policy proposals addressing things such as judicial reform, lending reform and FCC licensing.