Around the same time the supermodel makes use of World's Mental Health Day to endorse Biden, her father takes to Twitter to show his support to the current POTUS.

AceShowbiz - Hailey Baldwin and her father are on the opposite sides when it comes to their political beliefs. When commemorating World's Mental Health Day, the supermodel took to social media to offer up a public endorsement for Democratic presidential nominee Joe Biden, while Stephen Baldwin backed Republican Donald Trump.

On Saturday, October 10, the 23-year-old made use of Instagram to post two pictures of her wearing a blue tie-dye t-shirt with Biden written on it. In the accompaniment of the snap, she wrote, "It's world mental health day, and something that has affected my mental health is the state of our country and the future of our country. I have hope, but we need to collectively make the change we want for our future and that means getting out there to VOTE!!!"

Hailey's post received positive reactions from many of her famous friends. "Slide Away" singer Miley Cyrus noted, "Bieber X Biden my dream !" Celebrity makeup artist Mary Phillips commented, "Babes 4 Biden!!" Her uncle Billy Baldwin, who is a frequent critic of the 45th President, chimed in, "Thanks Hailey!! You have no idea how much this means to me..."

Around the same time Hailey shared her post, her father Stephen turned to Twitter to show his support for POTUS. "don't talk much about family pray 4 everyone every day! in my [heart] beauty of [flag of United States] 'land of #free home of #brave' is ... reverence 4 our freedom, importance of clarity of vote? (vision goal truth intent). Many are called, few are chosen! Gospel is truth battle already won #Trump2020," he tweeted. 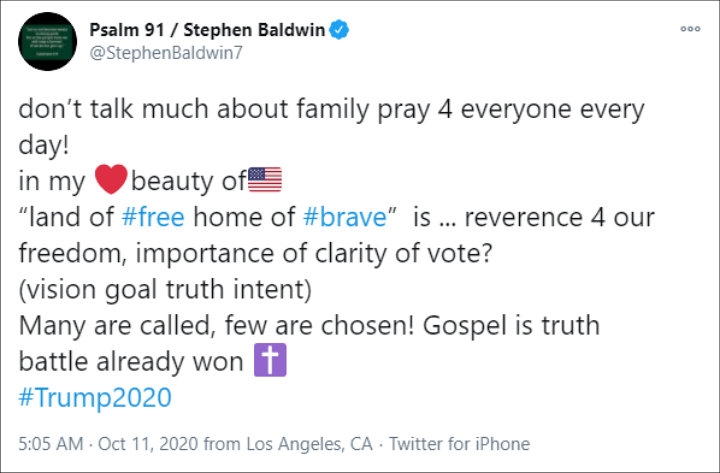 Back in 2017, Hailey opened up about how she dealt with her father's political view. "We didn't see eye to eye," the wife of Justin Bieber told The Times. "It was a very big issue for me, but my dad's still my dad. I would never let politics get in the way of family. It's over now, and his opinions have changed with how everything's now unfolding. Every day, the news freaks me out. It's terrifying."

Hailey joined fellow celebrities, such as Taylor Swift, Dwayne "The Rock" Johnson, Billie Eilish, John Legend and Cardi B, in endorsing the former vice president for the November 2020 election.