AceShowbiz - It looks like Azealia Banks has had enough of the coronavirus pandemic and she blamed it all on the Democrats. Hopping on her Twitter account to go on a rant, the rapper said that this pandemic only made her decide to vote for Donald Trump rather than Joe Biden.

In a video she posted on the blue bird app, Azealia noted that while she believed coronavirus is real and spreading, she hated how it made numerous people shut down their business. She said, "This s**t is f***ing stupid. We're in the music industry for f***ing what? Shut down businesses for f***ing what? It's still spreading anyway. ... I've had enough of this bulls**t -- of this lockdown bulls**t."

Despite ranting for a whole 2 minutes in the video, Azealia is still apparently not done getting things out of her chest. Declaring that her vote would go to Trump, she added in a separate tweet, "SORRY. GUYS BUT ITS LOOKING LIKE ANOTHER TRUMP 2020 VOTE FROM AZEALIA BANKS."

"OPEN S**T UP. THIS PANDEMIC IS LITERALLY A F**KING SCAM," the "212" rapper went on saying. "F**K ALL OF THESE F**KING WEIRD TECHNOCRATS AND ESTABLISHMENT DEMOCRATS THEY ARE ACTUALLY CREATING A CLASS WAR FOR US RIGHT NOW. THIS S**T IS ACTUALLY F**KING EVIL." 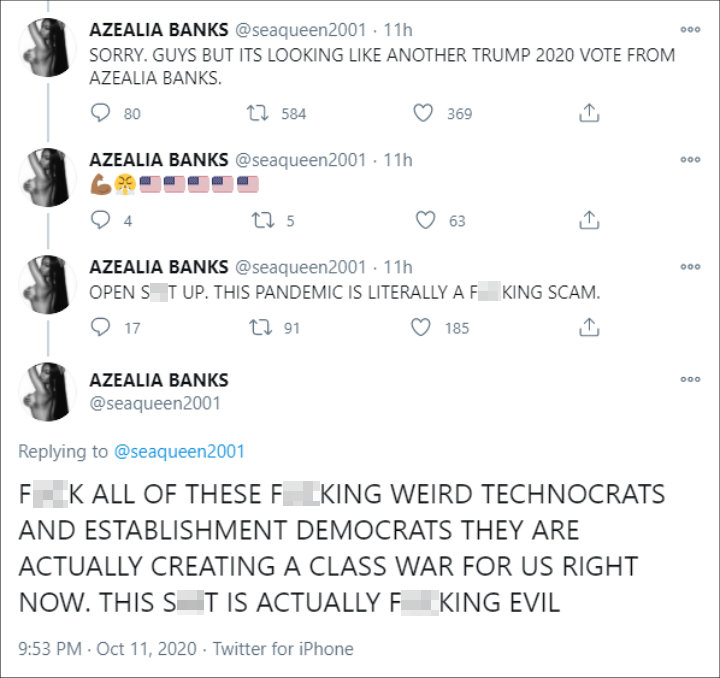 Azealia is far from being the first black celebrity to vote for Trump. Former NFL stars Jack Brewer and Hershel Walker previously appeared at Republican National Convention to voice their support for the current POTUS.