Hitting back at those who find their past romance weird, the 'Love Galore' singer writes on Twitter, 'I just didn't want anybody thinking anything underage or creepy was happening.'

AceShowbiz - Days after Drake dropped a bombshell about their relationship, SZA has properly addressed the matter on social media. Confirming that she indeed used to date the hip-hop star in the past, the "Love Galore" songstress used her Twitter account to clarify a few things in regards to their romance.

In the Sunday, October 4 post, SZA clarified that they dated in 2009, not in 2008 like what he rapped on "Mr. Right Now". She said on the blue bird site, "So It was actually 2009 lol. in this case a year of poetic rap license mattered. lol I think he jus innocently rhymed 08 w wait . Anybody who really knows me and was around during this time can confirm.. it's all love all peace."

To those who found their past romance weird, SZA made it clear that it was nowhere near creepy as they thought it might be. "I just didn't want anybody thinking anything underage or creepy was happening," she said, describing their relationship as "completely innocent." She then added, "Lifetimes ago." 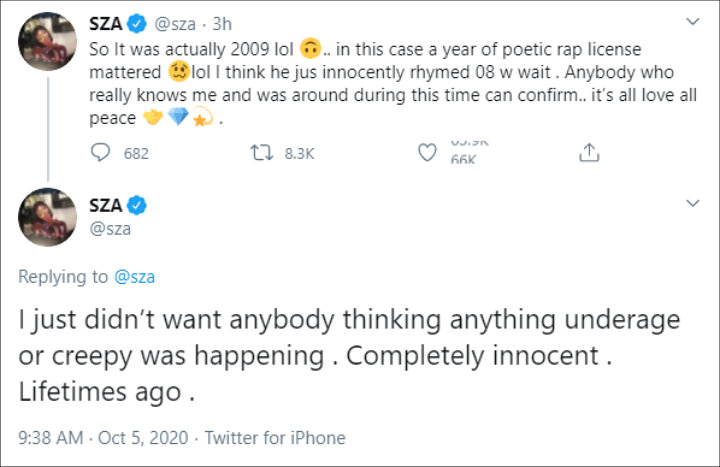 This revelation came as a shock to a lot of people considering the fact that SZA was still a minor in 2008, prompting them to attack the "God's Plan" rapper and call him a pedophile. SZA herself appeared to hit back at the critics when she shared on Instagram Stories a video of a man telling someone off the camera, "Excuse me, mam. Excuse me. You're in my business? Ye, don't do this."

SZA Seemingly Reacts to Accusations That She Fakes Personal Information

SZA's Fan Exposes Her for Allegedly Lying About Personal Information

SZA Not Mad About Grammy Losses