Rice was under fire after crowds at his Saturday night gig were seen going mask-free amid the coronavirus pandemic, while Janson was deemed irresponsible for his similarly jam-packed show.

AceShowbiz - Kelsea Ballerini and Maren Morris have joined many in criticizing fellow country singer Chase Rice for ignoring the social distancing rules amid the coronavirus pandemic. One day after the "Eyes on You" crooner performed live in front of thousands of fans in Tennessee, the "Peter Pan" hitmaker and the "My Church" singer tweeted their frustration.

On Sunday, June 28, Ballerini called out Rice through a Twitter post. "Imagine being selfish enough to put thousands of people's health at risk, not to mention the potential ripple effect, and play a NORMAL country concert right now," she wrote. "@ChaseRiceMusic, We all want (and need) to tour. We just care about our fans and their families enough to wait." 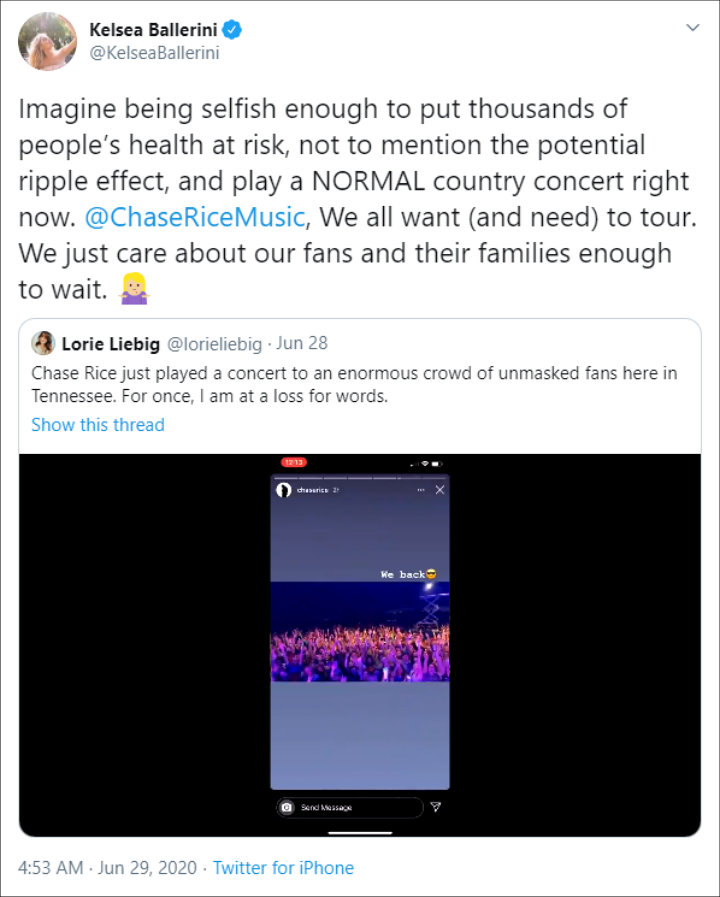 Morris was not as vocal as Ballerini with her criticism. The 30-year-old singer simply tweeted, "[exploding head emoji] [disappointed face emoji] no masks," in response to Mickey Guyton's tweet about Rice's jam-packed gig that read, "This is happening in Tennessee where cases are spiking y'all. Jesus help us." 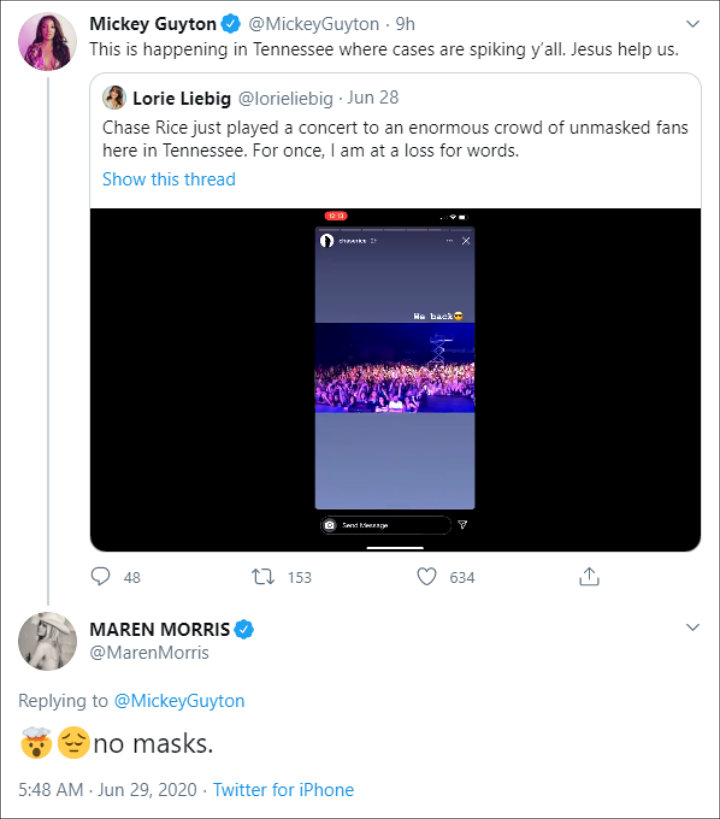 A short while later, Morris re-tweeted the criticizing post made by The Mountain Goats. "The people in this audience, along with the presenters of this show, are assuring that conscientious musicians won't be able to work their jobs for a while," the indie folk rock band voiced their outrage, "and that conscientious audiences won't be able to see shows for the foreseeable, and to be blunt, that f**king sucks." 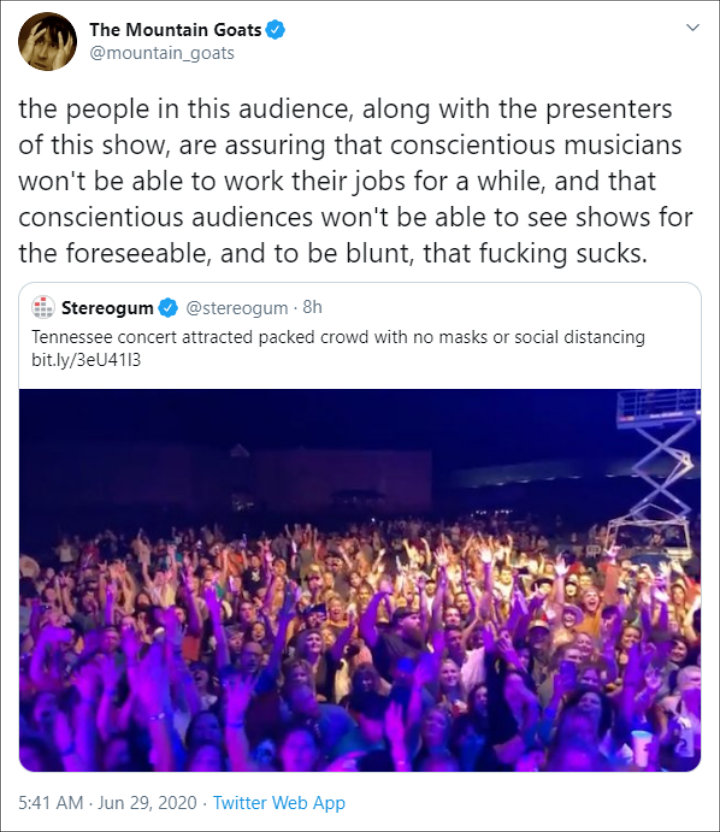 Hours later, Morris returned to Twitter to reveal with her followers that she has been blocked by her former tour mate Chris Janson, who was also slammed by many for his similarly packed show in Filer, Idaho. Sharing a screenshot of the blocking, the wife of Ryan Hurd tweeted, "Ummmmmm what did I DO?!" 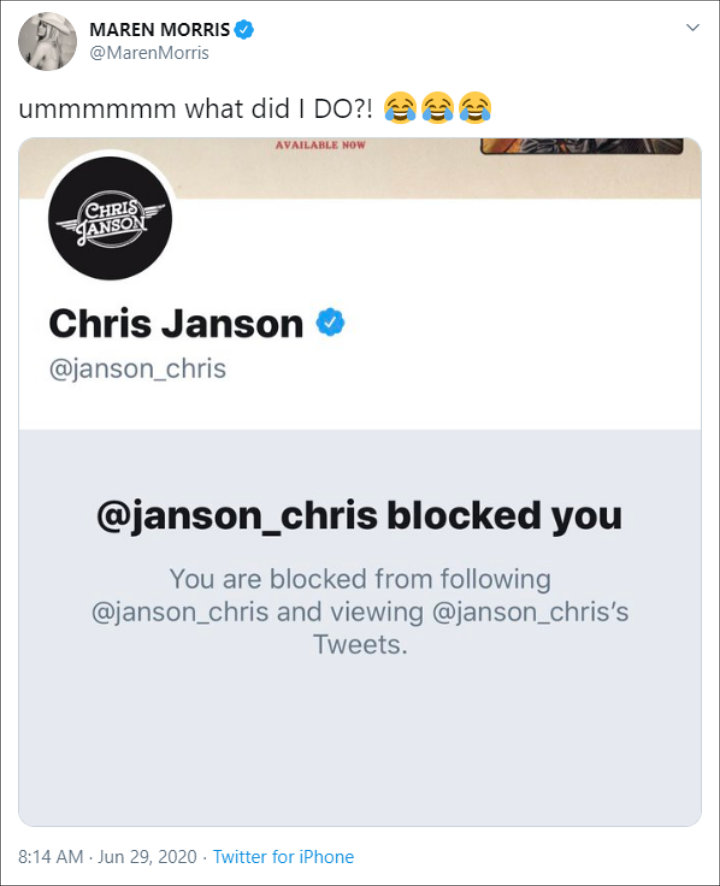 Maren Morris revealed that she has been blocked by Chris Janson on Twitter.

Rice's Saturday night concert took place at the Brushy Mountain State Penitentiary in Petros, Tennessee. It was reported that around 4,000 fans, whom most were seen without a protective face masks, gathered for the live performance. Footage shared by the 34-year-old via Instagram Story sparked health and safety concerns since the crowd were seen standing shoulder-to-shoulder.

In response to the criticism, Rice's concert venue issued a statement via ET. "All local requirements were abided by for the recent concert, and numerous precautions were taken," it read. "We drastically reduced our maximum venue capacity of 10,000 to 4,000 maximum capacity (lower than the state's advisement of 50%) with less than 1,000 in attendance Saturday night providing ample space in the outdoor lawn area for fans to spread out to their own comfort level."

"All guests were given temperature checks prior to entering the venue and free hand sanitizer was provided to everyone at entry. All vendors and staff were advised to wear masks and gloves when interacting with guests, and bandanas were available for purchase on-site," the statement continued to read. "We are reevaluating the series from the top to bottom - from implementing further safety measures, to adding stanchions, to converting the space to drive-in style concerts, to postponing shows."