The photo in question has the 'Keeping Up with the Kardashians' star holding a Black Lives Matter sign, but people notice that the sign is not visible in her shadow on the ground.

AceShowbiz - Kendall Jenner has once again found herself at the center of a Twitter debate linking her to Black Lives Matter protests. The 24-year-old model has been accused of faking a photo of her joining the protest in the wake of George Floyd's death.

The picture which has circulated online for a few days shows the "Keeping Up with the Kardashians" star rocking a black attire and black mask while holding a Black Lives Matter sign. The sign, however, suspiciously doesn't show up in her shadow on the ground.

People soon noticed the photoshop fail as the photo seemed to be taken from Kendall's 2019 Facebook post. They later took to the blue bird app to blast the star for allegedly faking the image.

"kendall jenner a whole a** circus," one person slammed the reality TV star. Another critic reacted, "Did kendall jenner really photoshop a picture of herself holding up a black lives matter sign... ? aii she was cancelled before but she BIG cancelled now."

"@KendallJenner what happened sweetie? You really had to photoshop a poster you couldn't really just go out and actually go support black lives? You had to use a pic from 2019," a third user commented. Someone else wrote, "Are Kendall Jenner's fans so desperate to make her look good that they would photoshop her holding a blm sign and wearing a mask? The answer is yes, yes they are."

Not letting people believe the false accusation against her, Kendall has set things straight about the photoshopped pic. She denied that she edited the photo and posted it online, claiming that someone else did it. "this is photoshopped by someone. i DID NOT post this," she wrote on her Twitter account along with the picture in question. 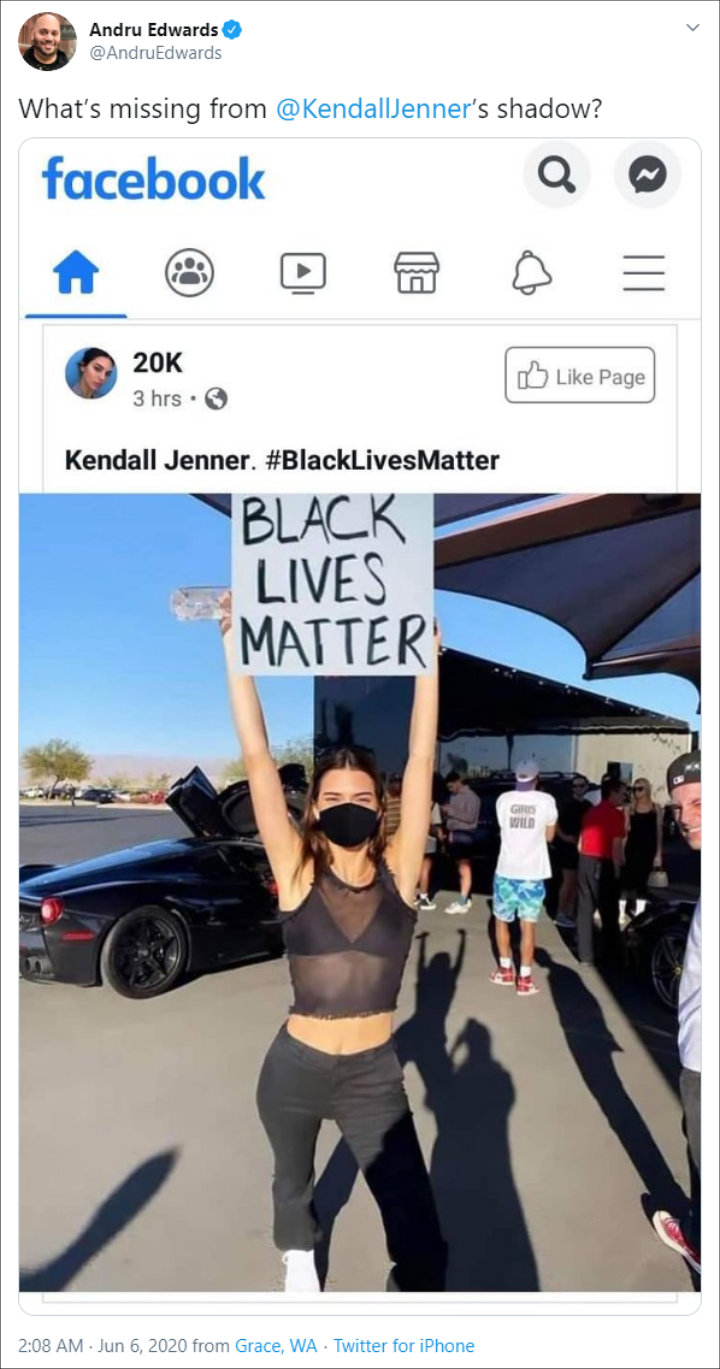 Her fans also came to her defense, with one writing, "Like for f**ks sake - we've gone over this like five times. She didn't make it. A fanpage photoshopped the sign AND the mask in. The photo is originally from November 2019."

"This is one of the worst posts on the Internet. Trying to discredit someone for fake photoshop with a fake Facebook post. Anyone that believes it's a Kendall Jenner post is an idiot," another tweeted.

On June 1, Kendall showed her support for the Black Lives Matter movement via an Instagram post, in which she wrote, "to everyone reading this and to myself: keep researching, reading, and educating yourself on how we can become better allies."

"I've been doing a lot of thinking these past few days and my heart has been so heavy," she continued. "I'm angry and hurt just like so many. I will never personally understand the fear and pain that the black community go through on a daily basis, but i know that nobody should have to live in constant fear. I acknowledge my white privilege and promise I will continue to educate myself on how I can help."

She, however, was roasted on the Internet by protesters who parodied her Pepsi ad, pointing out how handing out a can of soda to police didn't work to dissolve a protest.

Kendall Jenner Feels 'Extremely Overworked', Frustrated by 'So Many False Narratives' About Family