In one of the videos that have gone viral, popular Instagram comedian Everett Byram parodies the controversial ad by handing a can of soda to an LAPD officer, but gets turned down.

AceShowbiz - Some protesters have proven why the premise in Kendall Jenner's Pepsi ad doesn't work in real life. One person, popular Instagram comedian Everett Byram, mocked the controversial ad by recreating it as he joined a protest in Los Angeles on Tuesday, June 2.

In a video which has gone viral, Everett was seen approaching a line of cops and offering a can of soda to an officer. "Hey, you guys, like a Kardashian over here," he said in the clip. "Hey, look, it's a Pepsi, want Pepsi? Have it! Have a Pepsi, dude!"

The officer told Everett he appreciated the offer, but turned it down. "But it helped in the commercial," Everett quipped, to which the cop responded, "I don't drink soda." The comedian captioned the clip, "kardashian thing didn't work."

In a separate incident, another protester wearing a mask walked up to a line of police in riot ear, handing a plastic Pepsi bottle. "I can't believe someone actually did it," someone tweeted an image of the moment. The officer in the photo was seen giving a thumbs-up, but it's unknown if the cop accepted the soda. 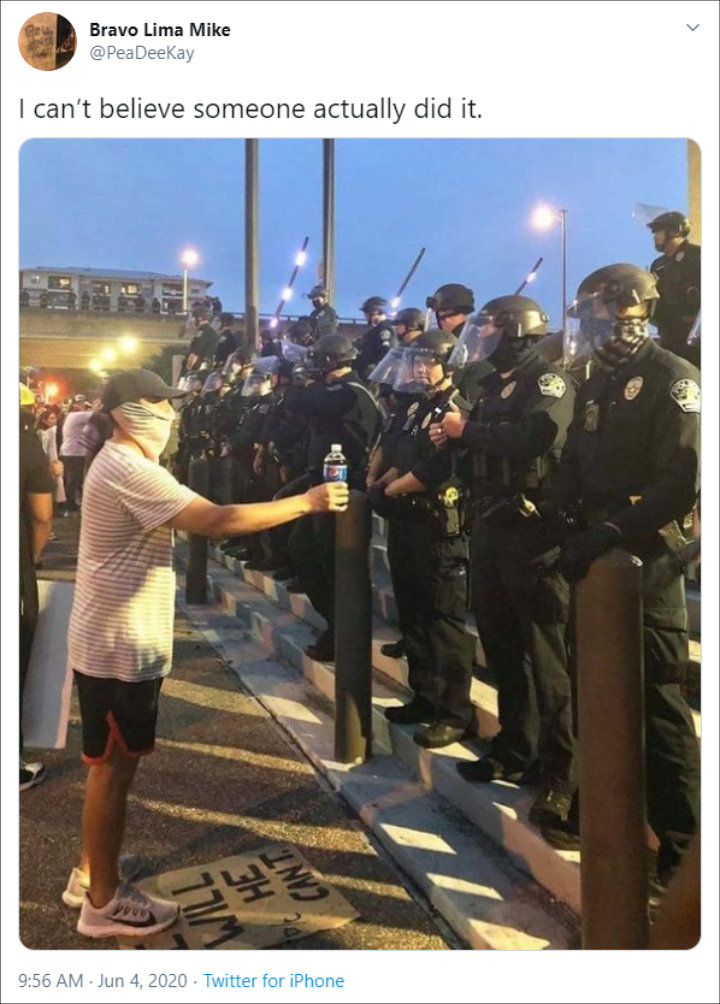 The photo has been retweeted by other users, with one quipping, "Trust me we all tried.." Someone else commented on the picture, "they hate soda. f**k the police."

The original ad, which was released in 2017 following rising demonstrations over other police killings of unarmed African-American people, had Kendall walk up from the midst of a crowded march to a police officer to hand him a can of soda to dissolve the tension. The ad was called out for its tone-deaf message and gross oversimplification of activism. Pepsi quickly removed the commercial and publicly apologized for missing the mark.

Prior to the parodies, Kendall's controversial Pepsi ad was brought up amid the ongoing nationwide protests in the wake of George Floyd's death, as people wondered where the model is in this current situation. "Where is @KendallJenner in Beverly Hills to calm this situation down," one person tweeted. Another similarly posted, "where’s Kendall Jenner with a Pepsi when we need her?"

"kendall talked about fake airpods on her instagram story for 4 SLIDES for a paid promotion and had nothing to say about george floyd and other innocent black lives that were taken besides a broken heart emoji. wtf," another disappointed user tweeted. A fourth critic similarly slammed her, "imagine having 130m instagram followers and as much money as kendall jenner and all you could do to spread awareness of the situation right now is post an emoji on your story."

Kendall has actually spoken up on the George killing, tweeting on May 30, "Please help get justice for George and his family #JusticeForGeorgeFloyd #BlackLivesMatter," to support a Change.org petition. It, however, took the 24-year-old reality TV star several days to share her take on the matter, while other members of her famous family spoke out about it days earlier.