Samantha, who played Jane Hayward in the sixth season of the hit series, makes the scathing claims against her former co-star after the latter tweeted her support to the Black Lives Matter movement.

On Monday, June 1, Newell, who tackled Wade "Unique" Adams on the show, responded to Ware's accusations against Michele by tweeting the "Get her, Jade" meme from "RuPaul's Drag Race". Riley, on the other hand, did not directly address the tension, but did put out GIFs of her raising finger in the air and of her sipping tea. 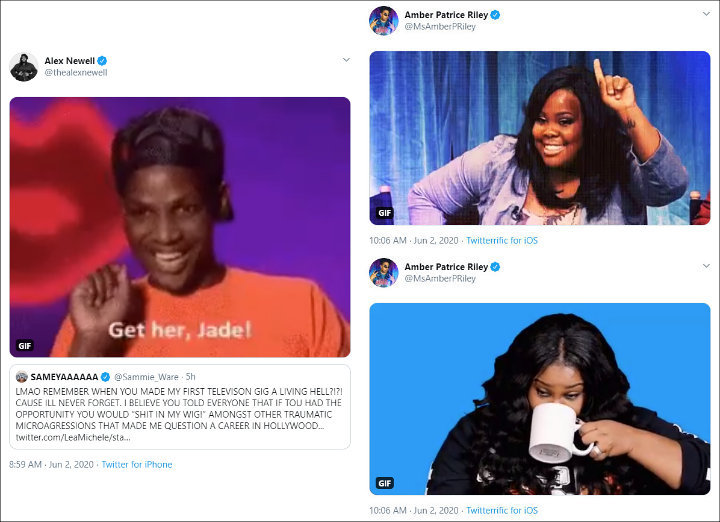 The actress best known as Mercedes Jones on the series, however, did not linger on the topic for long. She called an end to her response by posting a meme of herself declaring, "Let's move on," adding the hashtag of "#DefundThePolice", "#prosecutekillercops" and "#BlackLivesMatter". 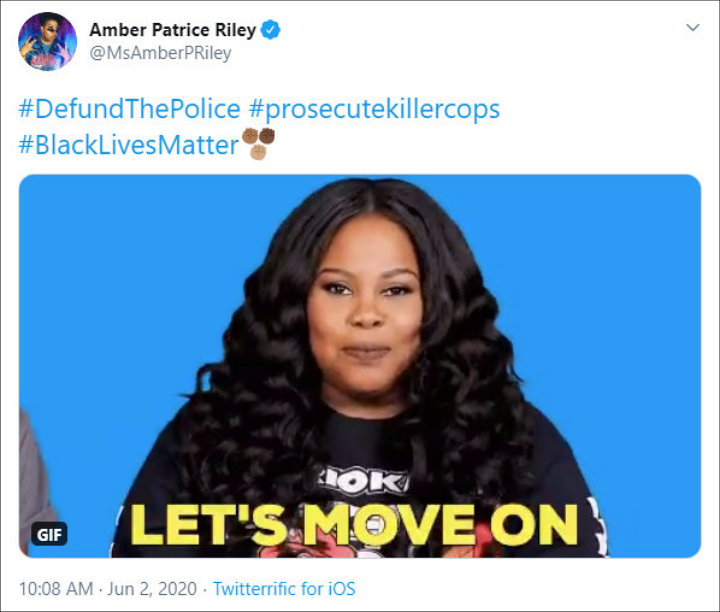 Also showing support to Ware was actor Dabier Snell, who made an appearance in a 2014 episode of the show. Sharing his own experience of Michele's rude behavior, he wrote in all caps on Twitter, "Girl you wouldn't let me sit at the table with the other cast members cause 'I didn't belong there' F**ck you Lea." 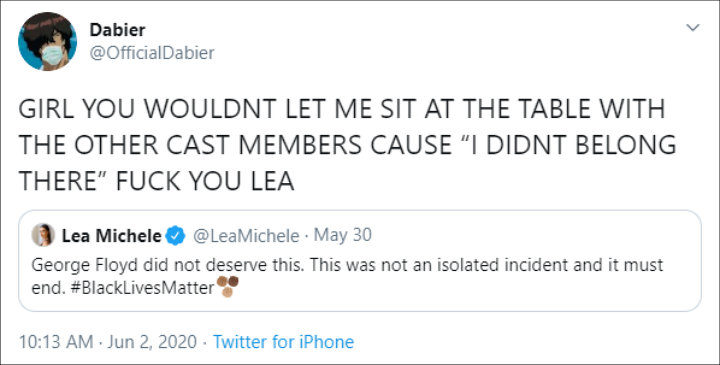 Dabier Snell called out Lea Michele for her rude behavior.

Ware prompted backlash against Michele earlier on Monday when she reacted to her former co-star's post about Black Lives Matter. "LMAO Remember when you made my first television gig a living hell?!?! Cause I'll never forget," she wrote on her Twitter account.

The Angela Archer of "What/If" continued to share in the same post, "I believe you told everyone that if you had the opportunity you would 's**t in my wig!' amongst other traumatic microaggressions that made me question a career in Hollywood…" 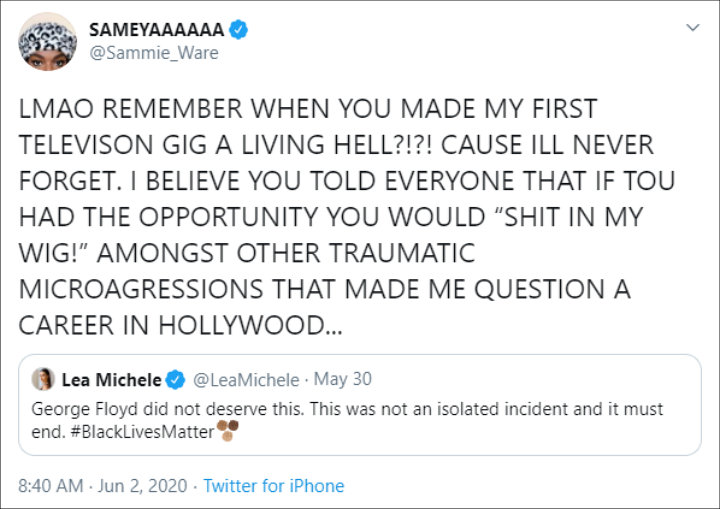 Michele's tweet, which led to the allegations, itself addressed the death of George Floyd at the hands of a white Minnesota police officer. "George Floyd did not deserve this. This was not an isolated incident and it must end," she tweeted on Saturday, May 30 along with the hashtag, "#BlackLivesMatter."

This was not the first time a former cast member spoke against Michelle. Back in 2016, co-star Naya Rivera spilled in her tell-all book "Sorry, Not Sorry: Dreams, Mistakes & Growing Up" about being ignored by the 33-year-old actress.

"Lea was a lot more sensitive, though, and it seemed like she blamed me for anything and everything that went wrong," she wrote in her memoir. "If I'd complained about anyone or anything, she'd assumed I was b***hing about her. Soon, she started to ignore me, and eventually it got to the point where she didn't say a word to me for all of season six."