The season 14 lead of 'The Bachelorette' and her fiance have been hit with breakup speculations just weeks after they celebrated their two-year engagement anniversary.

AceShowbiz - Becca Kufrin is still very much together with fiance Garrett Yrigoyen. Weeks after celebrating the second anniversary of their engagement, the couple who met each other in season 14 of "The Bachelorette" was hit with speculations that they have called it quits. She, however, was quick to set the record straight.

Poking fun at the split rumors, the 30-year-old reality star made use of Instagram Story on Sunday, May 31 to share a clip of her cuddling up with her fiance and their rescue corgi puppy in bed. Over the video, she noted, "According to social media, @gy_yrigoyen and I broke up because he was gone fishing over the weekend." 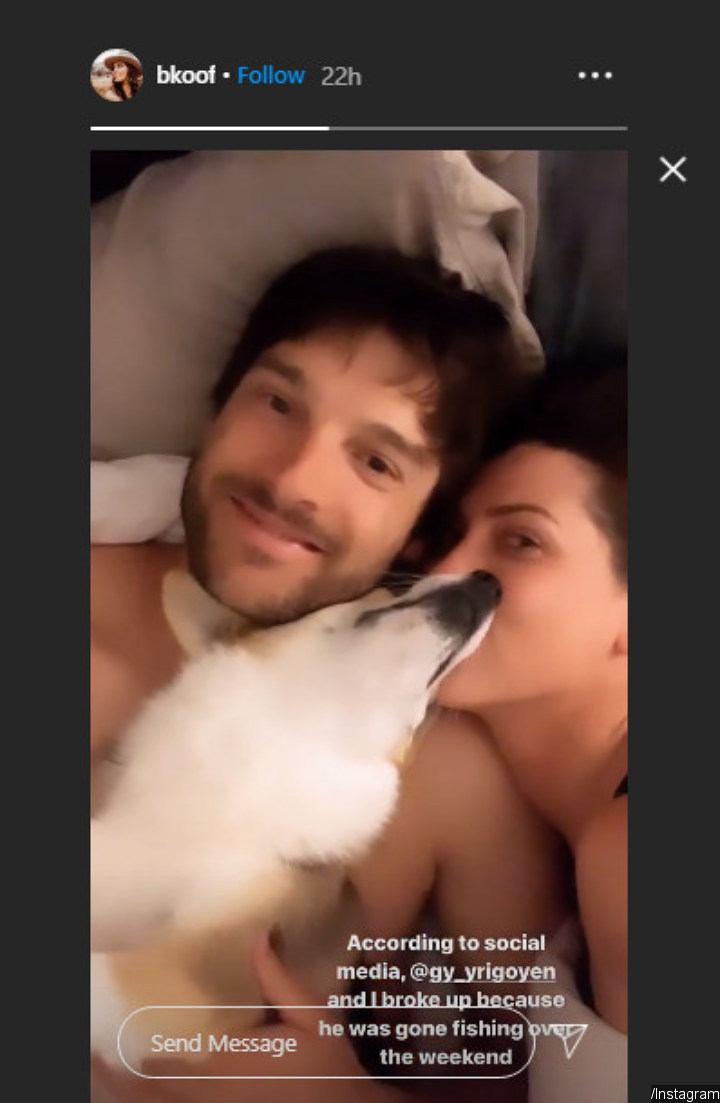 Hours later, on Monday, June 1, Yrigoyen reposted Kufrin's Instagram Story in his own account. Along with it, he included "Hello Good Morning", P. Diddy's song with his group Dirty Money. He additionally shared photos and videos from his fishing trip on his Instagram feed. In the caption, he quoted his fiancee, "I may not be good at much, but I'm pretty damn effishient at putting food on the table."

Weeks earlier, Kufrin and Yrigoyen commemorated their anniversary with loving social media tributes. She looked back after their time on the hit dating show, "Hey @gy_yrigoyen, remember when you opened the ring box backwards? That's when I knew I was in for the time of my life. Two years down, hopefully 68 more to go," while he gushed, "I've learned precisely 730 new things about you and from you. Something new every day. Happy 2 year, love you B."

Back in March, Kufrin opened up about how quarantining together with Yrigoyen at their Carlsbad, California home amid the coronavirus pandemic brought them closer together. "This is something that no one I think could have planned or expected and so we're just adapting in a new way, which is really interesting," she told Us Weekly.

"In a lifetime, you live with a partner and you never think you're going to be locked inside with them 24/7, so it's us learning to compromise and give each other space when we need it," the former publicist went on explaining. Though so, she did not deny there are moments where they "kind of snap at each other." She added, "Surprisingly, it hasn't been as much. He has been keeping me laughing so much."