Justin is sickened by the video of a police officer who was suffocating the unarmed man to death, while Madonna calls it 'the most sickening, heartbreaking thing ive seen in a long time.'

AceShowbiz - Celebrities are enraged after another case of police brutality took the life of an innocent black man. Justin Bieber, Ariana Grande, Snoop Dogg, Madonna and more have voiced out their anger on social media after a video surfaced of George Floyd being suffocated to death during arrest by four Minnesota police officers.

Sharing a video of the incident, Justin wrote in the caption, "THIS MUST STOP. this makes me absolutely sick. This makes me angry this man DIED. This makes me sad. Racism is evil We need to use our voice! Please people." He then offered his condolences, adding, "I'm sorry GEORGE FLOYD."

Also crying for justice, Ariana posted on her Instagram Stories, "justice is not just about specific officers being arrested. It's about dismantling the systems that make it possible." She added the hashtags #BlackLivesMatter and #justiceforGeorgeFloyd. 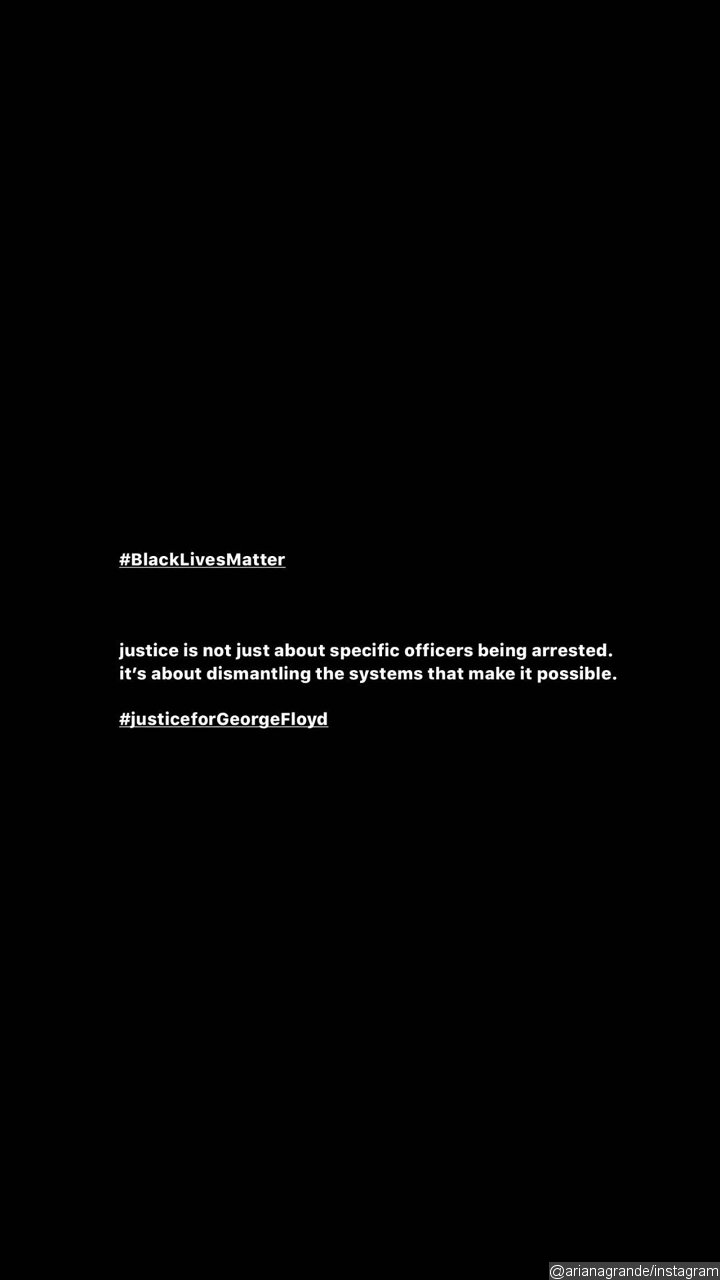 Snoop, meanwhile, posted on his Instagram page a side-by-side picture of George Floyd's arrest and Colin Kaepernick kneeling in protest of brutality, suggesting that "This... ...Is Why" the former NFL star did it. "no justice just us," he lamented.

Madonna called it "the most sickening, heartbreaking thing ive seen in a long time." She added, "This Officer knew he was being filmed and murdered him with arrogance and Pride. This has to stop!! Until we can over come Racism in America- no one should be allowed to carry a gun. Most of all cops."

Sending her sympathy, she continued, "God Bless you George Floyd Im so sorry for you and your family." Criticizing "all the senseless killings that have gone before you," she added, "I pray to GOD it does one day. Until then-F**k The Police! Yea I said it. Im not interested in being PC. Im interested in Justice."

Asking people to take action to stop police brutality, Ice Cube tweeted, "How long will we go for Blue on Black Crime before we strike back???" Rapper-turned-actor Ice-T remarked, "They Killed another Brother.. On Video," before noting that it was unacceptable, "I play a Cop on TV… But I'll NEVER stop speaking about injustice… EVER. F that."

Meek Mill, who's been an advocate for criminal justice reform, also reacted to the video as writing, "FBI investigates death of black man in Minneapolis after video shows police officer kneeling on his neck - The Washington Post. It's really not healthy to see white cops killing black men ... it's send a flare of anger and hatred to the brain!"

Meanwhile, St. Paul Mayor Melvin Carter called the video "one of the most vile and heartbreaking images I've ever seen." He tweeted, "The officer who stood guard is just as responsible as his partner; both must be held fully accountable. This must stop now."

In the video which surfaced on Monday, May 25, one police officer was putting his knee on George's neck as he arrested him. George told officers repeatedly that he could not breathe, but he was ignored until he fell unconscious. He was taken to Hennepin County Medical Center, but could not be saved.

According to CNN, officers responding to an alleged forgery in progress on Monday night were told a person who matches the suspect description was sitting in a car and appeared to be under the influence. When two of the officers arrived on the scene, they said the man, George, "physically resisted" when ordered to get out. Officers then handcuffed George who "appeared to be suffering medical distress."

Civil rights attorney Ben Crump said in a statement he'd be representing George's family. "We all watched the horrific death of George Floyd on video as witnesses begged the police officer to take him into the police car and get off his neck," he said. "This abusive, excessive and inhumane use of force cost the life of a man who was being detained by the police for questioning about a non-violent charge."

The four officers involved in the arrest have been fired, while the Minnesota Bureau of Criminal Apprehension and the FBI would be independently investigating the incident.