Chynna Rogers' Cause of Death Unveiled as Accidental Drug Overdose

The Philadelphia-raised rapper, whose last EP 'In Case I Die First' was released in December 2019, was confirmed by her family to have passed away at the age of 25 on April 8.

AceShowbiz - The cause of Chynna Rogers' death has been unveiled. Shortly after her management team confirmed that she has passed away at the age of 25 on Wednesday, April 8, the Philadelphia-raised rapper was uncovered to have died because of an accidental drug overdose.

A spokesman for the Philadelphia Department of Public Health made public Chynna's cause of death on Thursday, April 9. The "Glen Coco" spitter herself has previously opened up about her opiate addiction through "Ninety" mixtape. She later talked about when she realized she had addiction problem.

In a 2018 interview with Pitchfork, Chynna spilled, "I realized I didn't have control of the situation anymore the day that I didn't even feel like getting high, and my body was like, 'B***h, you better get high before you start throwing up and acting like a fool.' It was really frustrating."

"It got to the point where I had to do something just to be able to get onstage and do my job. I didn't like that. That was taking it too far, because it stops being fun and starts being because you have to, and that's when you need to chill."

Chynna, who started her career as a model at 14 years old, was found unresponsive at her home in Philadelphia on April 8. A statement released by her management team on the same day read, "I can regrettably confirm Chynna passed away today. Chynna was deeply loved and will be sorely missed."

The "Selfie" rapper's passing came ironically just four months after she released a new EP titled "In Case I Die First". Prior to that, she has released a number of other EPs, including 2015's "I'm Not Here. This Isn't Happening" and 2016's "music 2 die 2". She once stated that her music was "for angry people with too much pride to show how angry they are." 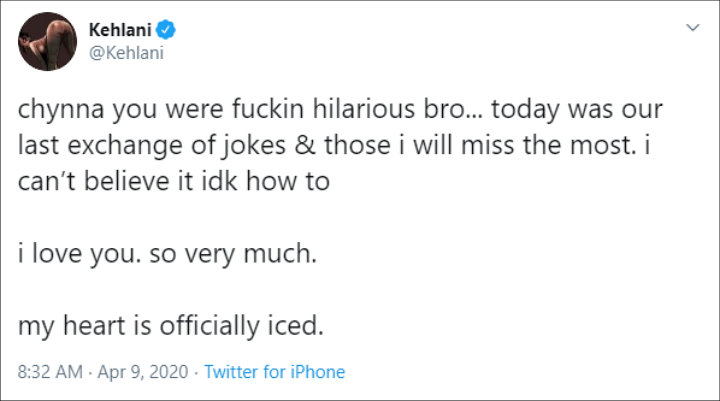 In the wake of her sudden passing, many celebrity friends have turned to social media to pay tribute. "Good Life" hitmaker Kehlani tweeted, "Chynna you were fuckin hilarious bro... today was our last exchange of jokes & those i will miss the most. i can't believe it idk how to. i love you. so very much. my heart is officially iced."

Vince Staples, meanwhile, took to Instagram to share a photo of the late rapper and wrote, "I don’t like doing this when my people go but I think everybody needs to know that you were special. Too special for words. Stay outta trouble lil cuh." A$AP Rocky has also made use of the photo-sharing site to express his condolence, "rest in peace baby girl."

Usher Responds to The Weeknd's Clarification of 'Climax' Comments