Addressing the delay on her follow-up to 2017 debut album 'SweetSexySavage', the 'Nights Like This' singer claims she is 'focused on how to just be a good citizen to society at this time.'

AceShowbiz - Kehlani is putting the release of her new album on hold amid the ongoing coronavirus pandemic.

The star was due to release the long-awaited follow-up to her 2017 debut album "SweetSexySavage" in the near future but, taking to social media, she explained she and her team are "unable to complete any of our plans or move forward with the album at the moment due to the pandemic."

"To be transparent, I had a release date," she started her post, before adding she was, "Not thinking about music at the moment, focused on how to just be a good citizen to society at this time." 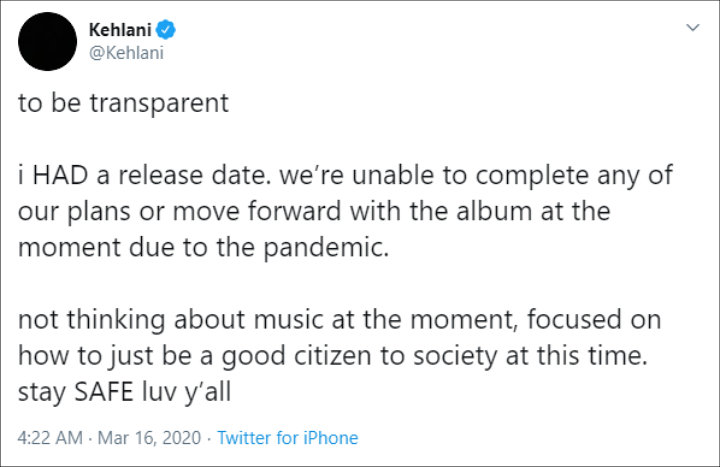 Kehlani delays release of new album due to coronavirus.

The last project Kehlani released was her 2019 mixtape "While We Wait", and last December (19) she dropped the track "All Me", which features guest vocals from Keyshia Cole.

The coronavirus outbreak, described by U.S. President Donald Trump as a national emergency, has wreaked havoc across the entertainment industry, with acts including Madonna, Cher, Foo Fighters, Billie Eilish and Mariah Carey all forced to cancel shows as health officials advise fans to practice social distancing and avoid large gatherings.

Kehlani Talks About Being Privileged After Coming Out as Lesbian