The former 'Baywatch' star also appears to respond to the movie producer's claim about their short-lived marriage in a Twitter post, hinting that she's 'betrayed.'

AceShowbiz - Pamela Anderson and Jon Peters' split is getting nasty. The 52-year-old actress and model has responded after her ex claimed that he paid $200,000 of her debt during their 2-week marriage, accusing him of lying.

Refuting Jon's claim, a rep for the blonde beauty told Fox News n Tuesday, February 11, "These claims are not only entirely fabricated, they are ludicrous." The rep added, "Despite Mr. Peters' scurrilous and ongoing efforts to elicit a response from Ms. Anderson, she has no comment to provide and hopes he is well."

While Pamela has not made a direct comment on the story, the former C. J. Parker depicter on the hit TV series "Baywatch" appeared to address her estranged husband's claim via her recent Twitter posts. She allegedly posted and deleted a poem that read, "It's hard to know what to do when people start spreading lies in the press .. the damage is done - I hope people understand where it's coming from - I don't want to have to defend myself it only draws more attention - feeding the problem."

In another post, she hinted at being "betrayed" by someone. "From a friend, As long as we recognize insanity we are sane," she wrote. "It is better to be betrayed than not to trust, better to be disappointed than not to love. Don't ever run from pain, just face it allow it to be and it will pass. And we will have grown to the next level." 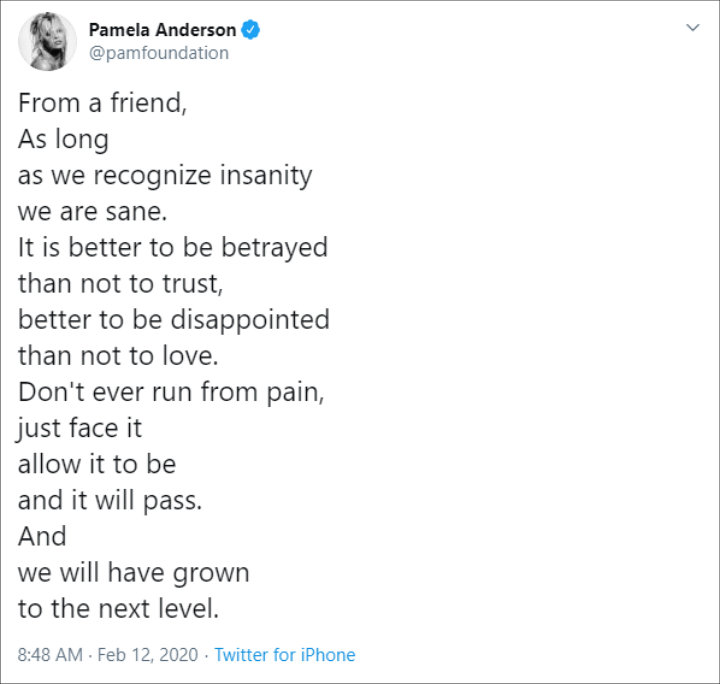 Pamela's tweets and her rep's statement come after Jon told the New York Post that he feels like "an old fool" for paying her "almost $2,000 in bills" during their short-lived marriage. "I dropped everything for Pam. She had almost $200,000 in bills and no way to pay it, so I paid it and this is the thanks I get," he said, responding to an article that claimed she walked out of their marriage because he was "too controlling."

'RHOA': Kandi Burruss 'Desperate' to Get a Spin-off Show