Instead of rocking a hat bearing the logo of the team he cheers on, the 'Holiday in the Wild' star shows up to the game in a generic black NFL hat complete with matching shirt and jacket.

AceShowbiz - It's not unusual for celebrities to attend an NFL game, but Rob Lowe's appearance at the Green Bay Packers versus San Fransisco 49ers game in California on Sunday, January 19 has successfully caught people's attention. Particularly, it was the hat the actor was wearing that got people talking on social media.

Lowe was captured on screen at one point standing wearing a black shirt, a black jacket and a simple hat bearing NFL logo. Considering that people usually sported the hat bearing the logo of the team they cheered on when attending a game, the fact that the "Holiday in the Wild" star simply wore the NFL hat prompted people to create memes and jokes.

Someone dubbed him the "first person in history to wear an NFL hat to an NFL game," while another pointed out, "The guy next to Rob Lowe looks like he's pitching his new half hour sitcom about a group of wacky NFL referees who also solves mysteries." One other joked, "Rob Lowe loves all 32 teams equally." Meanwhile, one person said, "Rob Lowe wearing an NFL hat in the crowd. Not a team. Just the NFL logo. Big fan of the league overall. Great stuff."

There was also one who quipped, "When Rob Lowe goes to a concert instead of getting a souvenir band t-shirt he just gets a shirt that says 'music.' " On the other hand, someone jokingly said that Lowe was there to root "for the referees" instead of the teams. Another individual commented, "Rob Lowe just rooting for a good game and success of the league." 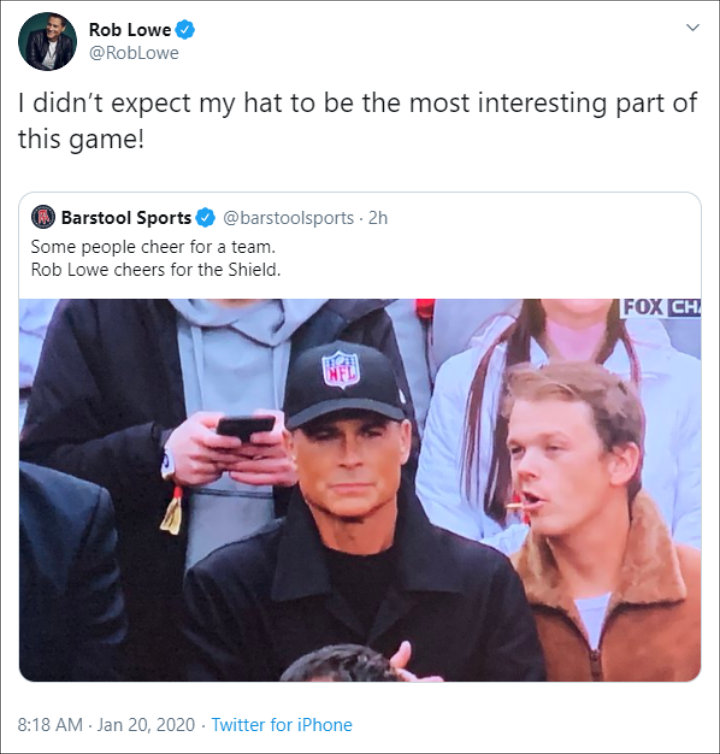 Lowe soon caught win of the people's chatter, which is understandable given that his name was trending on social media. In response to someone who said, "Some people cheer for a team, Rob Lowe cheers for the Shield," the "Parks and Recreation" alum said, "I didn't expect my hat to be the most interesting part of this game!"

Rob Lowe Shares How His Determination Helps Him to Stay Sober