Having been told that she butchered 1993 track 'To Love You More', the 'American Idol' alum fires back by sharing a brief clip of herself performing a perfect high note.

AceShowbiz - Singer Katharine McPhee has challenged a Twitter troll to hit the high notes after accusing the star of ruining a classic tune written by her musician husband, David Foster.

The former "American Idol" runner-up tackled the 1993 track "To Love You More" - originally performed by Celine Dion - for her man's recent live album, "An Intimate Evening with David Foster", but one male critic was not a fan and decided to take aim at McPhee online.

"Dear @katharinemcphee don't EVER sing 'to love you more'!!!" the guy wrote. "The fact that @officialdfoster would let you butcher that song - a classic at that, WOW!"

But the 35-year-old refused to let the hater get away with the rude remark, and fired back with her own cutting comment.

Sharing a brief clip of herself performing a perfect high note, she responded, "I'd like to see you try this, b**ch." 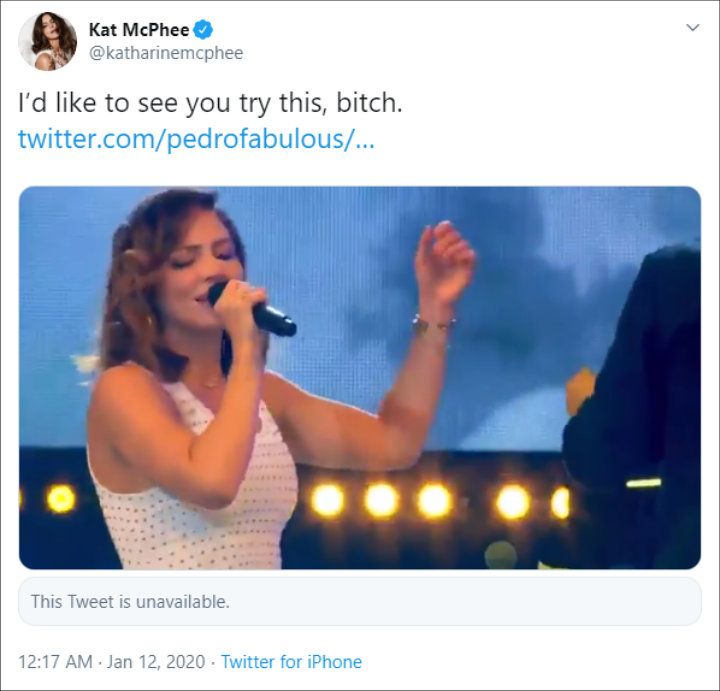 Katharine McPhee hit back at critics.