Less than a week after Christmas, the civil rights icon announces that he is battling a stage four pancreatic cancer, prompting politicians and celebrities to show their support online.

AceShowbiz - Stars and politicians including Cher and former President Barack Obama have sent messages of support to U.S. civil rights icon John Lewis after he was diagnosed with pancreatic cancer.

Lewis, 79, a member of the U.S. House of Representatives who was also a key figure in the civil rights movement in the 1960s, announced he has stage four pancreatic cancer on Sunday, December 29.

Upon hearing the news, a host of famous names from politics and entertainment rushed to show their support for the Congressman including Cher, Obama, Kamala Harris, Mark Hamill and Stephen Colbert.

"WHY MUST THE GOOD FIGHT FOR LIIFE (sic), WHILE THE EVIL THRIVE," Cher tweeted. I WILL PRAY EVERY DAY FOR REP JOHN LEWIS." 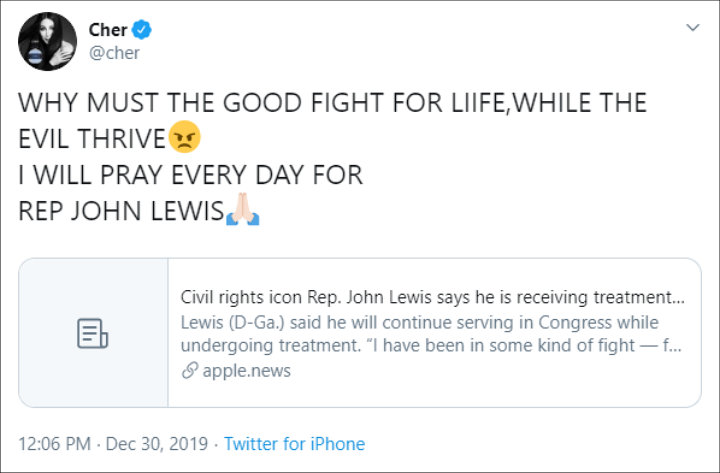 Obama wrote: "If there's one thing I love about @RepJohnLewis, it's his incomparable will to fight. I know he's got a lot more of that left in him. Praying for you, my friend."

Harris shared: "My friend John Lewis has gone up the rough side of the mountain many times before and his battle with pancreatic cancer is no different. Our nation is praying for you, John."

Hamill expressed his wish that Lewis, "kicks cancer's A**," while Colbert simply added: "God bless John Lewis. A leader, a teacher, an example for us all." 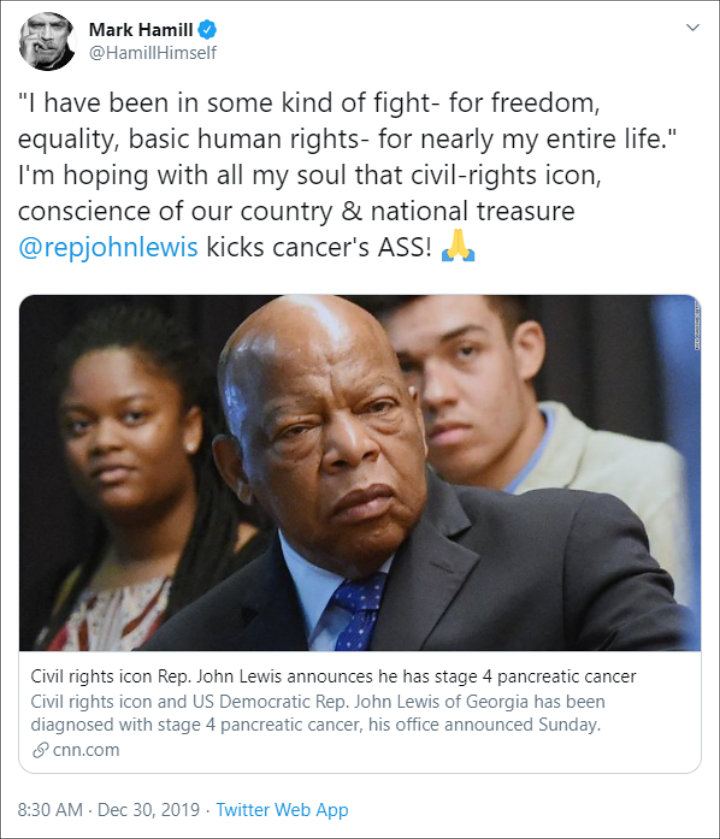 Mark Hamill was also among tho paid tribute to John Lewis.

Stephen Colbert gushed over Lewish in his tribute.

The veteran politician reassured his admirers that he is hopeful he can beat the disease in his statement announcing his illness.

"I have been in some kind of fight - for freedom, equality, basic human rights - for nearly my entire life. I have never faced a fight quite like the one I have now," he wrote. 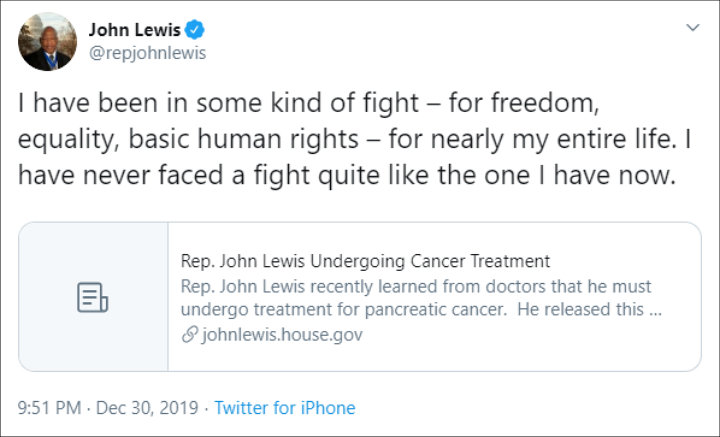 Lewis hoped to beat his cancer.

"While I am clear-eyed about the prognosis, doctors have told me that recent medical advances have made this type of cancer treatable in many cases, that treatment options are no longer as debilitating as they once were, and that I have a fighting chance."

These Celebrities Denounce Thanksgiving - Find Out Why