In a new picture seemingly taken on the set of the upcoming stripper movie, the 'Bartier Cardi' rapper flashes her bare breasts which are only covered with bejeweled nipple pasties.

AceShowbiz - Cardi B turned up the heat on her Instagram page by sharing yet another racy picture. The 26-year-old rapper went NSFW in the new photo which she posted on her social media account on Friday, June 21, after leaving very little to the imagination in a fishnet dress when attending Takeoff's 25th birthday party earlier this week.

The new picture apparently shared behind-the-scenes look at her character in upcoming movie "Hustlers". Playing a stripper in the Jennifer Lopez-starring film, she posed in a very revealing purple bodysuit that didn't cover her breasts. She, however, kept her modesty as she wore bejeweled nipple pasties.

The Bronx femcee completed the provocative look with fishnet stockings and silver lace platform heels as she posed in what appeared to be a dressing room. She revealed that she wore at least an item from Rihanna's Fenty lingerie collection, writing in the caption, "Diamond likes to wear @fenty lingerie." 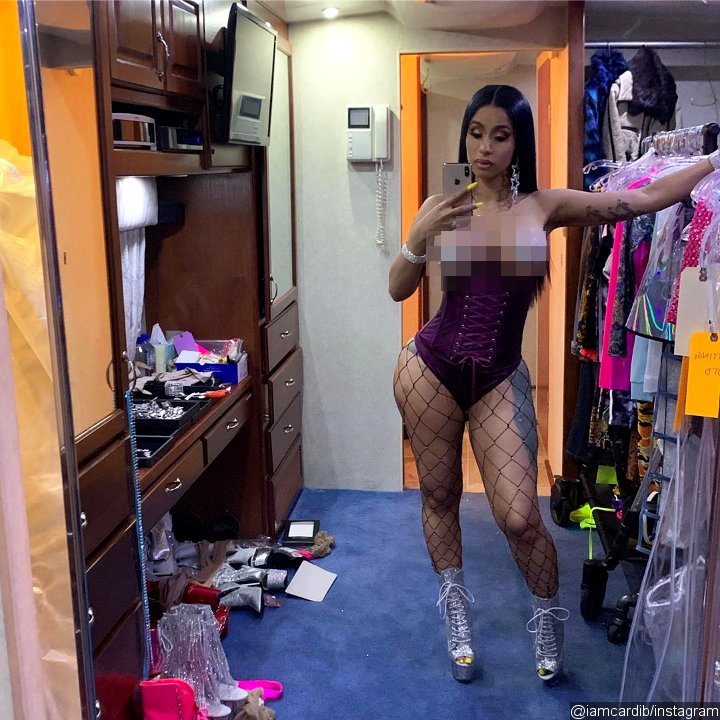 Her movie debut aside, Cardi has been entangled in a legal issue due to her alleged involvement in a brawl at a New York strip club last year. According to TMZ, the grand jury has indicted Offset's wife on 14 charges, including two counts of felony attempted assault with intent to cause serious physical injury. Other charges include misdemeanour reckless endangerment, assault, criminal solicitation, conspiracy and harassment.

Cardi was unhappy with the news outlet's coverage on the matter, lashing out at the site on a now-deleted Instagram post. "You don't profit on talking about white celebrities so you go out your way to report s**t on people in the urban culture and even make s**t up," she wrote. Claiming that the publication only reported negative things about her, she continued, "Ya don't do s**t to better the community but harass and oppress."