During the May 24 episode of 'Today', host Carson Daly extends his best wishes for the Maroon 5 frontman, and reveals that Gwen Stefani will be making her return as a judge in season 17.

Host Carson Daly announced the news on the "Today" show on Friday, May 24, revealing Gwen Stefani would be returning as a judge for the 17th season.

"Adam is one of the original coaches that launched the show, winning the competition three times and inspiring many of the artists that he worked so closely with," Daly said. "Many viewers will miss his frenemy relationship with Blake Shelton. He will always be a cherished member of 'The Voice' family and of course we wish him nothing but the best."

"I am happy to share that Gwen Stefani will be returning for season 17. She met her current boyfriend, Blake Shelton, through the show. (We're) excited to have her back."

Confirming the news in an emotional Facebook post, Levine writes, "About 8 years ago, (executive producer) Mark Burnett convinced us to sign up for this show where you sit in a big red chair with your back turned away from the singers on the stage. First thank you must go to Mark. We had no idea what we were doing or where it was going."

"After the first day of shooting, I sat there, stunned. I said to myself 'there's some magic here. Something is definitely happening.' It went on to be a life shaping experience that will be close to my heart forever."

And saluting his fellow original judge, Shelton, Adam adds, "I couldn't hide my love for you if I tried. Seriously. I tried. Can't do it. Our friendship is and always will be one for the books. Whatever this whole surreal experience was, Im (sic) just happy I got to experience it with you. You're my brother for life."

Shelton has since revealed he only learned of Levine's departure on Thursday night. He took to Twitter on Friday and wrote, "Having a hard time wrapping my head around @adamlevine not being at @NBCTheVoice anymore. After 16 seasons that changed both of ours (sic) lives." 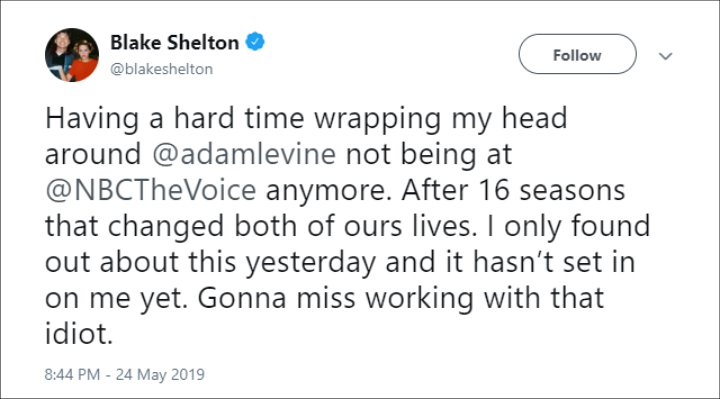 "I only found out about this yesterday and it hasn't set in on me yet. Gonna miss working with that idiot." 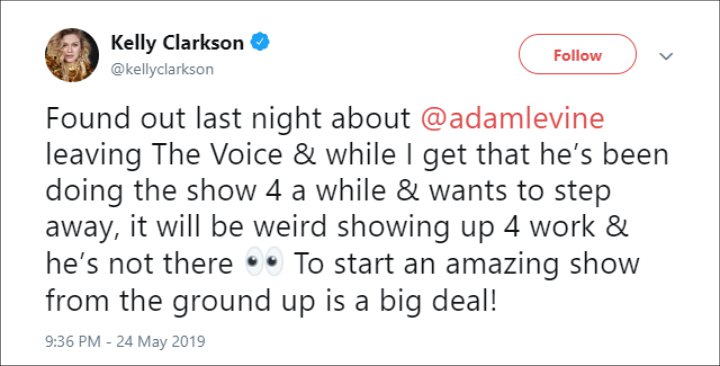 Fellow judge Kelly Clarkson added, "Found out last night about @adamlevine leaving The Voice & while I get that he's been doing the show 4 a while & wants to step away, it will be weird showing up 4 work & he's not there."