Olivia Jade is spotted riding a car with her older sister Isabella Rose behind the wheel in Santa Monica, California amid rumors that she isn't speaking to her parents.

AceShowbiz - Lori Loughlin's daughters Isabella Rose and Olivia Jade have been spotted for the first time since the college admissions scandal that drags their parents. The two girls, who have been keeping low profile in Southern California since the nationwide bribery scam was made public, were seen in Santa Monica, California.

Isabella, 20, was driving a Mercedes-Benz while her 19-year-old sister was on the passenger's seat. Their final destination was unknown, but their parents, Lori and fashion designer Mossimo Giannulli, live nearby in the neighboring Malibu community. 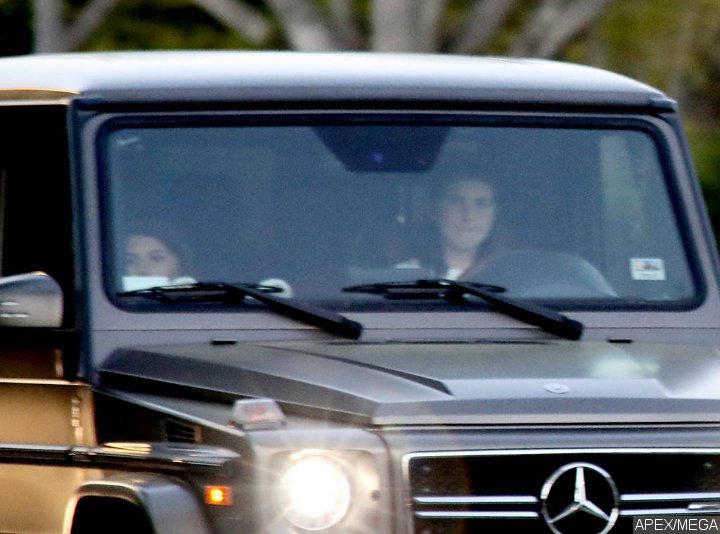 Lori Loughlin's daughters Isabella Rose and Olivia Jade keep it low-key while being spotted for the first time since the college admissions scandal.

Words are Olivia isn't on speaking terms with her parents after the scandal was unearthed. "Olivia is furious with her parents and it's going to take a lot to repair their relationship," a source tells E! News. "She blames them entirely and feels they have ruined her career."

Another source tells Us Weekly, "Olivia has been staying with her boyfriend, model Jackson Guthy, in Malibu. She's not talking to her parents right now." The source adds, "She is completely in hiding right now. Olivia is posting private Stories on her Instagram, using the only-close-friends option, to share her days on social media with her close circle."

A second source tells the site that Olivia's friends are "encouraging" her to forgive her parents and "not to be mad at her parents since they were just trying to do the best they could for her, but she doesn't listen. Olivia feels she is the victim."

Meanwhile, PEOPLE reports that "Olivia is hanging out with longtime friends," but "she doesn’t want to go out in public."

Lori and her husband Mossimo were arrested earlier this month for allegedly paying $500,000 to get their daughters admitted into the University of Southern California by pretending the sisters were competitive rowing recruits, while they had never trained in the sport and had no plans to do so. They were released on $1 million bond each. Olivia and Isabella are reportedly still enrolled in the USC despite the alleged bribery.

Commenting on his "Full House" co-star's issue, Bob Saget appears to be fully supportive of Lori. "I just love who I love," he tells TMZ. Referring to Candace Cameron Bure's speech at the 2019 Kids' Choice Awards, he adds, "Candace said it really good at the Kids' Choice Awards. You love who you love," adding, "Life's complicated. I don't like talking about it."

Cameron Bure received backlash after saying at the Saturday, March 23 event, "A loving family sticks together no matter what." Hinting that she supports Lori, she continued, "They stick together through the hard times, they support each other, they encourage one another, they pray for each other and they stand by their side, no matter how tough it gets."