The MTV star is thrown a surprise birthday party by her 'Jersey Shore' co-stars at the Martorano's Italian restaurant at Harrah's in Atlantic City in Atlantic City, before continuing the bash at Pool After Dark.

AceShowbiz - It's never too late to celebrate your own birthday. Even though Jenni "JWoww" Farley turned 34 last week, her "Jersey Shore" co-stars threw her a surprise birthday party at the Martorano's Italian restaurant at Harrah's in Atlantic City on Saturday, March 9. The party then continued at Pool After Dark where DJ Pauly D kicked off his residency.

Among the guests at the bash were Deena Cortese, Angelina Pivarnick, Vinny Guadagnino and Mike "The Situation" Sorrentino's wife Lauren. Nicole "Snooki" Polizzi couldn't come due to pregnancy. JWoww documented the party on Instagram, sharing the moment when she first learned about the surprise.

"I am still in shock. I feel so special!" she wrote in the caption. "Shout out to @illuminator and @djpaulyd for the ultimate surprise party & harrahresort #martoranosac for making it such a great night and everyone for coming."

I am still in shock 😫😫😫😫 I feel so special! Shout out to @illuminationpr and @djpaulyd for the ultimate surprise party & @harrahsresort #martoranosac for making it such a great night and everyone for coming ♥️

In addition to videos, JWoww uploaded a slew of pictures from the fun-filled bash. One of them was an image of her holding a big cardboard of Snooki, while her friends each held a cardboard of her face. "BEST BIRTHDAY EVERY. still in awe," the "Jersey Shore: Family Vacation" star wrote along with the photos.

BEST BIRTHDAY EVER 🙌🏼🙌🏼 still in awe

Not only "Jersey Shore" stars, but JWoww apparently also got a visit from Teresa Giudice at the party. "The Real Housewives of New Jersey" star's appearance at the bash shocked many people, including the birthday girl herself. "Everyone was so surprised to see Teresa Giudice, who was at the hotel for her daughter's dance competition," a source told HollywoodLife.com. "She was so sweet and stopped by to say hello to Jenni and wish her a happy birthday."

The source continued saying of the Bravo star, "Teresa looked so stunning and was all smiles and in a great mood. Jenni had a great time celebrating with all of her friends." The two additionally took a photo at the party, with Teresa looking stunning in a deep v-neck green dress. Meanwhile, JWoww sported a glittery mauve, light brown jumpsuit. 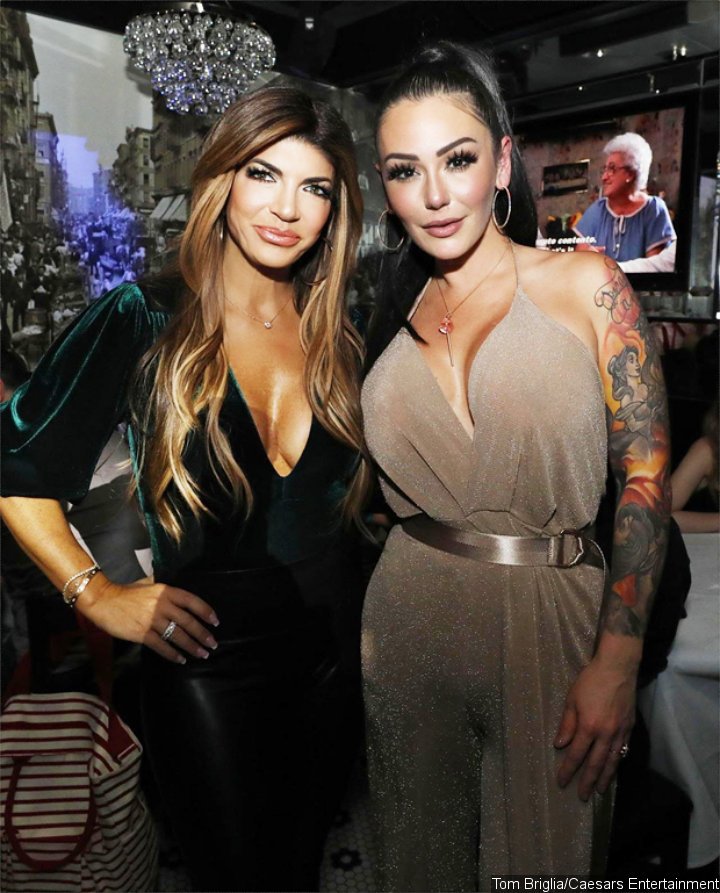 JWoww and Teresa Giudice posed at the former's birthday party.