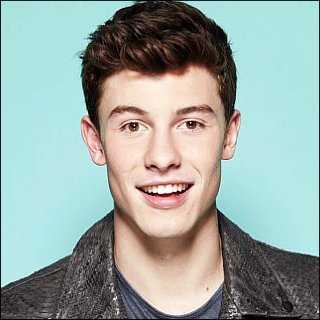 Shawn Mendes was born Shawn Peter Raul Mendes on August 8, 1998 in Toronto, Ontario, Canada. He was raised in a suburb of the city called Pickering. He started his career in music in 2013, after posting his first cover video to Vine. It's only a six-second clip of him singing with guitar in hand, but the video took off like wildfire.

Shawn also began posting his own unique original melodies as he continued posting a mix of covers. His videos spread across Vine, YouTube, Instagram, Twitter and every online social outlet imaginable, amassing millions of views.

Now with over 10 million cumulative YouTube views, and with over 1.8 million Vine followers, Shawn is the third biggest musician on Vine, surpassing stars like Wiz Khalifa, Justin Bieber, Mac Miller and many others, and is becoming one of the most buzzed-about young artists in music.

In mid 2014, Shawn released his debut EP, "The Shawn Mendes". The set, debuting at No. 5 on Billboard 200, includes hit single "Life of the Party" which reached No. 24 on Billboard 100 and made Shawn the youngest artist to enter the chart's top 25 with a debut song.

The EP debuted and peaked at No. 5 on Billboard 200. Shawn then followed it up with his 2015 debut LP, "Handwritten", which landed at No.1 on the albums chart. The album spawned the singer's biggest single yet, "Stitches". The song reached No. 4 on Billboard Hot 100, becoming his first top 10 single on the list.

That same year, Shawn joined Taylor Swift on her "1989" tour. In between the tour dates, he got a chance to work with Fifth Harmony's Camila Cabello. The two co-wrote a song called "I Know What You Did Last Summer" that was later released in late 2015 and was included in the re-issue of his album.

In early 2016, Shawn began teasing his sophomore effort by dropping its lead cut "Treat You Better". The song has so far reached No. 8 on the Hot 100 and its parent album, "Illuminate", is set to come out on September 23.

The album itself debuted atop the Billboard 200 chart and was certified platinum. The second single off the effort, "Mercy", was released on August 18 and was certified double platinum. After appearing as the musical guest on "Saturday Night Live", the singer embarked on a world tour in support of the album.

The success of "Illuminate" prompted Shawn to release a deluxe version of the album. He then released single "There's Nothing Holdin' Me Back" in April 2017. The song ruled the Mainstream Top 40 airplay chart. Later that year, he became the first artist under 20 years old to have three No. 1 songs on the Billboard Adult Pop Songs chart.

Also in the same year, Shawn came out as the biggest winner at the 2017 MTV Europe Music Awards, which was held at SSE Arena in Wembley. He brought home four awards, which were Biggest Fans, Best Artist, Best Canadian Act and Best Song for "There's Nothing Holdin' Me Back".

Having a successful career, it was no surprise that his personal life was put on the spotlight. He was rumored to be dating Hailey Baldwin after leaving a Halloween party hand-in-hand. They later added fuel to the rumors when they were caught French kissing at Rita Ora's MTV EMAs after-party. Shawn was also rumored to be dating Camila Cabello after being photographed having a pizza date at Artichoke Pizza in New York.

Being hit with dating rumors didn't hold Shawn back from releasing new music though, as he released the lead track off his upcoming third studio album, "In My Blood", on March 22, 2018. "Lost in Japan", the second single off the effort, was released just hours later.

Following its release, "In My Blood" topped Billboard's Adult Pop Songs chart. It made Shawn become the first and only artist to have four No. 1 singles in the chart before turning 20 years old. The single was additionally nominated for Song of the Year at the 61st Annual Grammy Awards and won Single of the Year at the 2019 Juno Awards.

His self-titled studio album arrived on May 25, 2018 to positive reviews. It debuted atop Billboard 200, making him the third-youngest artist to collect three No. 1 albums on the chart. The album also topped music charts in Australia, Canada, Austria, Belgium and Spain among others in addition to being nominated for Best Pop Vocal Album at the Grammy Awards.

To promote the album, Shawn announced that he would be embarking on a tour as well as perform at music festivals across Europe, North America and South America. Later in September, he released a remix version of "Lost in Japan", enlisting record producer Zedd. The collaborators debuted live performance of the remix at the 2018 American Music Awards.

Shawn continued promoting the album by appearing on several TV shows, including taking part in CMT Crossroads. He teamed up with Zac Brown Band during the TV special, belting out nine songs as well as a cover of Michael Jackson's "Man in the Mirror". The Canadian singer was also tapped as the musical act at the 2018 Victoria's Secret Fashion Show which was recorded in New York City in November. In the following month, he released a three-song EP that included remixes of songs from his self-titled album.

In February 2019, Shawn announced that he was tapped as the latest brand ambassador for Calvin Klein. The first picture of him promoting the brand became a hot topic among social media users almost immediately. It was because the photo featured him going shirtless, something that he barely does. Months after that, on May 3, the singer released a single titled "If I Can't Have You". The song debuted at No. 2 on Billboard's Hot 100 chart, becoming his highest-charting hit in the United States.