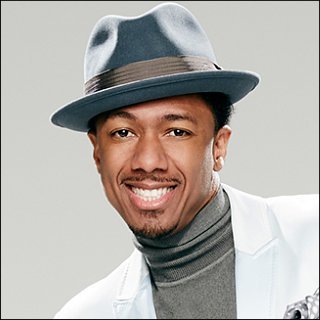 Widely perceived as a fine multi-talented figure due to his success in both music and film industry, Nick Cannon indeed possesses such rare quality that many can hardly match to thereby shine out brilliantly among other artists of his generation for sure. A San Diego native born Nicholas Scott Cannon on October 8, 1980 to James Cannon and Beth Hackett, the star initially began to compile experience in those two fields even before his teens when he without hesitation came onstage to do stand-up on his father's evangelical public-access show besides started to perform song at the age of 8. Chose to nurture first his knack in music, the boy then joined forces with best friend Steve Groves to form a rap duo called Da Bomb Squad which delightfully managed to open for notable names like Will Smith, Montell Jordan, LFO, also 98 Degrees, but as the urge to act took over, he later decided to change direction and boldly headed for Hollywood instead.

Only 16 at that time, Nick surprisingly was quick to make his way in comedy circuit through his stand-up routines at various clubs such as The Improv, The Laugh Factory and the Comedy Store to finally find himself becoming a regular cast member of Nickelodeon's hit program "All That" in the show's sixth season. However, it was his stints as the host of the network's "SNICK House" and "TEENick" that actually brought the Spring Valley's Monte Vista High School alumnus more public attention, leading him to have his own show there, "The Nick Cannon Show," plus to encounter his breakout film role in "Drumline," both came up by 2002. An enjoyable picture made on modest budget by Charles Stone III, "Drumline" really was a great vehicle to boost the guy's career as not only it turned out to be both commercial and critical success, but also directed him to land two MTV Movie Award nods for Breakthrough Male Performance and Best Kiss categories a year later.

Subsequently catapulted to widespread popularity that automatically enabled him to gain larger access in entertainment industry, Nick thus used the chance to return to music and released an eponymous album in 2003 under Jive Records. The work resulted well enough in charts, peaking at number 15 on Billboard's Top R&B/Hip-Hop Albums while spawning a smash hit single entitled "Gigolo" which was included in the top 30 of The Billboard Hot 100 by the following year. In the meantime, his film career also ran smoothly on the track as he effortlessly nabbed the major parts in movies like "Shall We Dance?" (2004), "Underclassman" (2005), plus "Roll Bounce" (2005). The velvety path, however, sadly was not found in his romance with Christina Milian for the pair ultimately concluded to split in summer 2005 after dating for more than 2 years, mainly because of the alleged affair he had done behind her back.

Nevertheless, the ungentlemanly thing Nick had committed apparently did not affect much his profile since the striking star kept moving on with his 2006 film projects of "Even Money", "Bobby", and "Monster House." 2008, in the meantime, found him enacting in contrasting movie genre of thriller "The Killing Room", sports drama "Goal II: Living the Dream", and drama "Ball Don't Lie", which cast fellow music artist Ludacris as well. The year supposedly would also mark the launch of his second studio album "Stages" before he appears as prominent tennis player Arthur Ashe in a biopic of the late athlete set to come up in 2009.

As for his love life, Nick briefly dated Kim Kardashian in 2006 before then turned his heart to Victoria Secret model Selita Ebanks after meeting her at a Super Bowl weekend party in Miami on February 4, 2007. Took a serious step in their relationship, he popped the question on May 7 the same year in the middle of Times Square, got down on one knee with a 12-carat diamond ring while the MTV JumboTron in New York's Times Square flashed the question, "Selita will you marry me?" In October the same year, however, a representative for Ebanks confirmed the couple has split, saying "Selita and Nick are taking a break to focus on their careers but still very much love each other and remain the best of friends."

Josh Gad: My Daughters Are No Longer Interested in Olaf