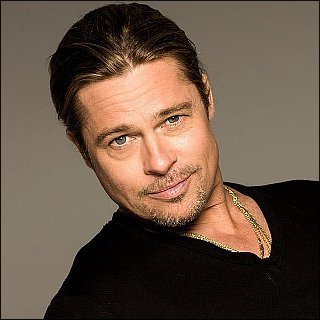 Born to a trucking firm owner father and a school counselor mother, William Bradley Pitt is better known as 'Brad Pitt'. He was born on December 18th, 1963 in Shawnee, Oklahoma, but was raised in Springfield, Missouri. He is the oldest in the family and has a younger brother, Doug (b. 1966) as well as a younger sister named Julie (b. 1969). During his youth, Pitt spent his time studying at Kickapoo High School in Springfield, Mo. and graduated in 1982. There, in his high school, Pitt used to be a member of the golf, tennis and swim teams. Besides, Pitt whose high school nickname was Brad the "Pitt-bull" also belonged to his high school Key and the Forensics Club. He continued his education at University of Missouri School of Journalism focusing in advertising, but then decided to quit before trying his luck in Hollywood.

Before becoming a famous actor, Pitt supported himself by doing some different occupations, like driving strippers in limos, moving refrigerators, and dressing as a giant chicken while working for the restaurant chain El Pollo Loco. Penetrating acting with the late Roy London, slowly and surely Pitt then able to place on his solid footing on TV and film industry. He got his first feature film role as a cowboy in the 1991 "Thelma and Louise" with 14 minutes of screen time, a starting point for Pitt to play in his many other famous movies.

Soon afterward, Pitt's popularity rising like wildfire thanks to the role he played in "Interview With the Vampire" (1994) where he played alongside with his senior, Tom Cruise. In the same year, Pitt starred in another movie which title was "Legends of the Fall," after which he was named as the 1994 'Sexiest Man Alive' by People Magazine. One year later that was in 1995 Pitt played in "Se7en", a movie tells about a serial killer obsessed with the seven deadly sins. In that movie, Pitt and his co-star Morgan Freeman act as two detectives in charge of solving the crimes. Playing as the wife of Pitt's character is Gwyneth Paltrow and Kevin Spacey as the killer.

Spending most of their time playing in the same movie with related characters, husband & wife, emerged love between Pitt and Paltrow that on December 20, 1996, they tied the knot in an engagement. As a result of the engagement publicity by press, Pitt became even more and more popular though one of his next movies so-called "Seven Years in Tibet" (1997) had caused him being banned from entering China. Behind the scene, Pitt romance with Paltrow ruined and in June 1997, with no reasons given they announced their 2 1/2 year mutual relationship end.

Beyond the split, Pitt tried to hold on his fame and career by playing in several other movies, like "Meet Joe Black" (1998), "The Mexican" (2001), "Ocean's Eleven" (2001), and TV series "Friends" (2001 episode as Monica's friend). Furthermore, the many awards he got had proven him as not only tough but also professional actor. A bunch of accolades he scored among others were being chosen by Empire magazine as one of the 1995's 100 Sexiest Stars in Film History (#23) then by "People" magazine as one of 50 Most Beautiful People in the World in 1996 and 1997. In addition, Pitt had once listed in People Weekly's "Most Intriguing People" list (December 25, 1995/January 1, 1996 issue), voted #1 in Company magazine's annual 100 Sexiest Men poll in 2004, given the title of "Sexiest Man Alive" from People Magazine and People's Choice in 1995 [2000] and thus he has become the only man to ever be named "Sexiest Man Alive" twice by "People Magazine".

The fame Pitt got in his movie career became more complete when in the spring season of 1998 he met Jennifer Aniston, who is a Greek ancestry and for whom he secretly took Greek language lessons to surprise her. They subsequently got married on July 19, 2000. Yet, Pitt romance doesn't work as well as his career does. In early January 2005, the couple announced their 4 1/2 year marriage end, causing the many speculations of the causes. Once, Pitt has been accused to have an affair with Angelina Jolie, his assassin wife in "Mr and Mrs Smith" (2005), while another source mentioned the spouse different views in forming a family, especially in having baby, as the main reason of their split. Anyway, Pitt and Aniston claimed their divorce wasn't about the speculation reported by the media; instead they had to face much thoughtful consideration before they came to the decision. Above all, both still remain good and close friends.

Amid the rumors of his love relationship with Jolie which still circulated in the tabloids, Pitt, through his publicist, shockingly announced in early January 2006 that he and the actress were expecting a child together in response to People Magazine's report on Jolie's pregnancy, subsequently confirmed all the issues about their affair that have been around for months since his break-up with Aniston. In the anticipation of their baby to be delivered, he enthusiastically carried out his new role as the legal adoptive father of Jolie's two children, Maddox and Sahara, after a Santa Monica judge finally granted his request on this matter by the same month. And by May 2006, that was on 27th date to be exact, the hunk and his partner Angelina Jolie welcomed their first child ever, a daughter whom they named Shiloh Nouvel Jolie-Pitt.

Back to his acting career, Pitt kept working his way smoothly in the field for the rest of the first decade of the 21st century. Appearing in "Troy" and "Ocean's Twelve" prior to his stint in "Mr and Mrs Smith," he eagerly joined Cate Blanchett to highlight Alejandro Gonzalez Inarritu's multiple narrative drama "Babel" (2006), which wonderfully scored him a Golden Globe nomination in best supporting actor slot by 2007. The same year also saw the hunk reprise his role of Rusty Ryan in "Ocean's Thirteen" while toplining "The Assassination of Jesse James by the Coward Robert Ford." The schedule became more hectic as he next was billed to star in at least five more films namely "The Curious Case of Benjamin Button", "Dirty Tricks", "Chad Schmidt", "Dallas Buyer's Club", and "Burn After Reading", all set to come up in 2008.

Not resting on his acting laurels, Pitt determinedly continues to get productive in producing movies via his Plan B Entertainment which he founded alongside Aniston and Brad Grey, the CEO of giant film company Paramount Pictures. Reached tremendous success in producing Oscar-winning picture "The Departed" (2006), he effortlessly moved on to afterwards produce a number of titles like "Year of the Dog" (2007), "A Mighty Heart" (2007), "The Time Traveler's Wife" (2008), "World War Z" (2008), and "Peace Like a River" (2009).