The husband of Cardi B lost his cousin and Migos bandmate on November 1 after the late rapper was fatally shot during an altercation at a club in Houston, Texas.

AceShowbiz - Offset has something to say to social media users who make posts about Takeoff. Taking to his social media account, the "Bad and Boujee" hitmaker warned people not to share anything about his late cousin unless it's in a "good light."

On Tuesday, December 6, the husband of Cardi B posted an image of Jesus Christ on his Instagram Story. Along with the special picture, he wrote, "Don't post Takeoff unless it's in a good light please!" 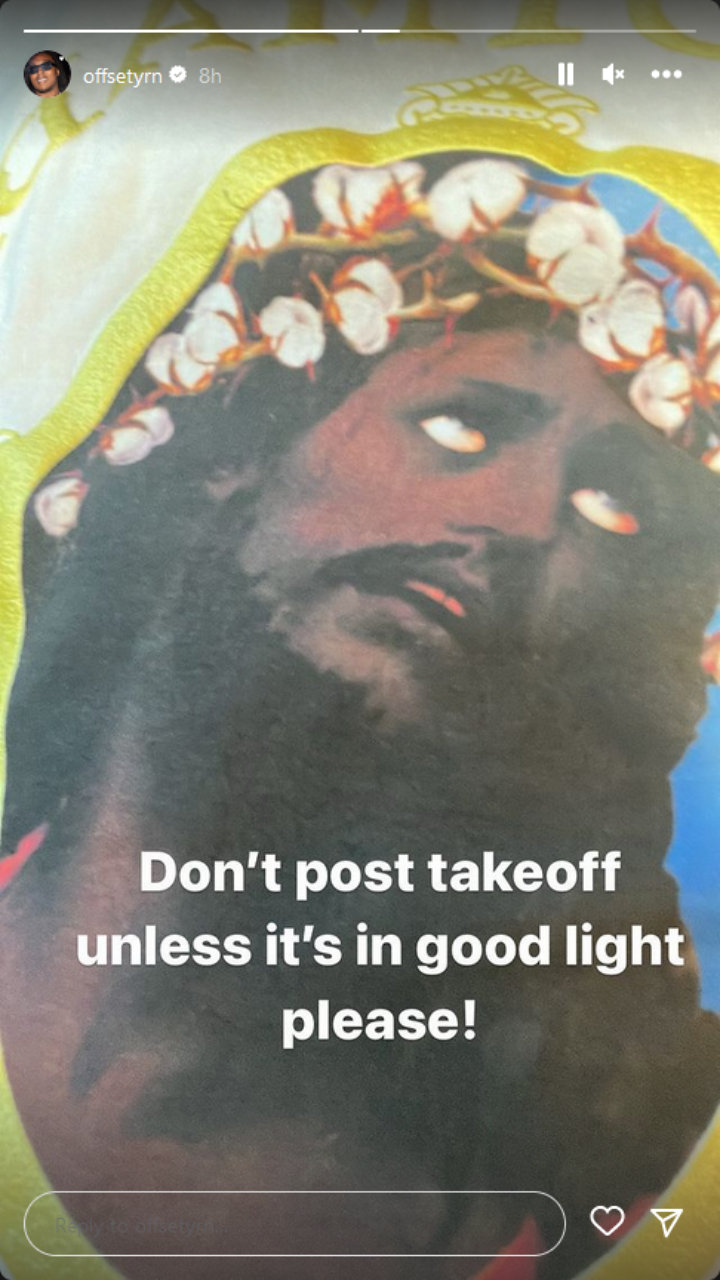 Offset has a message to fans making posts about Takeoff.

Offset's post came after he celebrated Takeoff's life when performing at Miami club E11EVEN over the weekend. "We are going to go Takeoff crazy in here tonight. I'm doing this for my brother. For Takeoff, let's do this s**t," the 30-year-old hip-hop star told the crowd as he honored his Migos bandmate. He then performed some of the group's hits, including "Bad and Boujee" and "Fight Night".

Offset has been having rough times since Takeoff was fatally shot on November 1 following an altercation at a club in Houston, Texas. Late last month, his wife Cardi admitted that it was hard to make him happy again. "We living our life normally, but deep down inside our hearts have been so heavy," the femcee claimed in a since-deleted Twitter voice note.

"I feel like if I talk about the incident so desensitized, I feel like if we talk about how we really feel or what motherf**ckers really been going through, y'all will start saying, 'Oh, sympathy.' And we don't want no sympathy. We ain't no charity case," she added. "But no lie, I have been feeling so hopeless trying to make my husband happy."

"Trying to make him crack a smile," the "Bodak Yellow" spitter continued. "Seeing him randomly cry, see him trying to distract his mind completely, schedules been changing, trying to keep up with work after everything that he's been going through these past couple of weeks."

One month following the fatal incident, a suspected killer was arrested. Patrick Xavier Clark was taken into police custody on December 1. A few days after being booked, he made his first court appearance.

While Patrick didn't say a word during the hearing, lawyer Letitia Quinones told the judge he was "nervous" and "concerned." His attorney further defended that he's nervous as "he's being charged with something that he believes he's innocent of, so how would anyone do in that type of circumstance?"

Lawyer Letitia was also asked by the judge about Patrick and Takeoff's connection. "We really don't want to go into the facts at this point," she said, before adding that it was all a "tragedy and it's happening well too often in our communities."

"There is a lot of investigation that needs to be done," she continued. "So, we just ask that everyone keep an open mind and let the system do its part and let the Constitution do its part, and that is, right now, he's innocent until he's proven guilty."

Letitia also denied that her client was attempting to flee to Mexico. It was previously reported that Patrick filed for an emergency passport after the shooting and was arrested with a large sum of cash.

Offset and Hit-Boy Link Up for New Song '2 LIVE'