AceShowbiz - Kyrie Irving is now a sneaker free agent. The Brooklyn Nets star and Nike have officially ended their business partnership amid his anti-Semitism controversy. Following the end of the partnership, the basketballer turns to his social media account to share what he really feels.

On Monday, December 5, the 30-year-old tweeted a GIF, featuring a quote that read, "There's nothing more priceless than being free." He later responded to a reporter who tweeted, "Kyrie Irving is no longer a Nike athlete, Nike spokesperson says. The sides have parted ways one month after Nike suspended its relationship with the Nets star. Irving has one of most popular signatures shoes in the NBA and is now a sneaker free agent," alongside a hilarious GIF with the words, "LET THE PARTY BEGIN."

Not stopping there, Kyrie penned in a follow-up tweet, "Anyone who has even spent their hard earned money on anything I have ever released, I consider you FAMILY and we are forever connected." The basketballer continued, "it's time to show how powerful we are as a community."

"To my Tribe : 'I am because you are,' " Kyrie went on stating. The seven-time All-Star then said, "I pour libations and pray for all of my people today and everyday. I am," before concluding his post, "Hela." 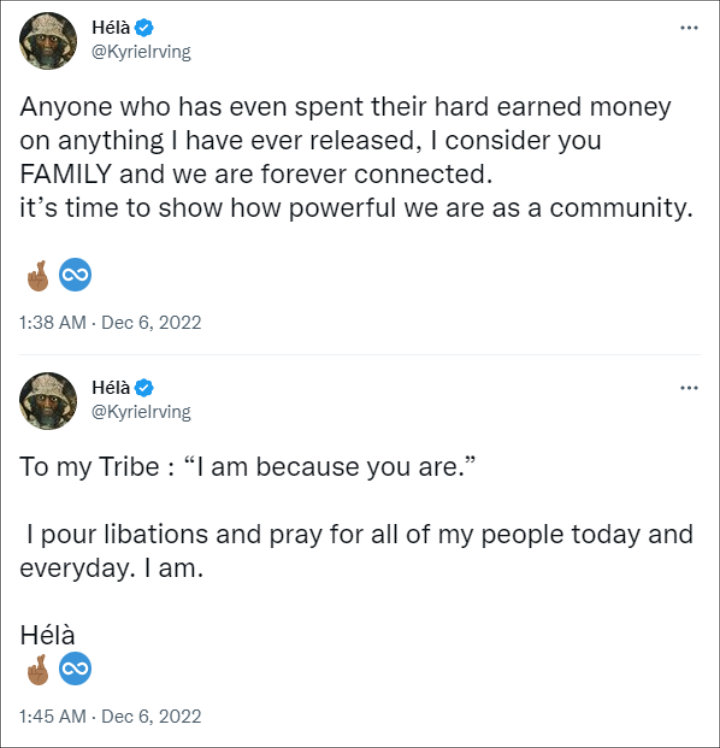 Earlier on Monday, Nike announced in a statement that "Kyrie Irving is no longer a Nike athlete." Kyrie's contract with Nike, which has produced the basketball star's shoe line since 2014, was initially set to expire in October 2023. Of the contract termination, Kyrie's agent Shetellia Riley Irving stated, "We mutually decided to part ways and we just wish Nike all the best."

In November, Nike announced that it "is suspending" its partnership with the NBA star. "Nike announces the company is suspending its relationship with Kyrie Irving, effective immediately," NBA reporter Shams Charania tweeted. It's also said that Nike will no longer launch its new Kyrie 8.

Kyrie came under fire after tweeting a link to the "Hebrews to Negroes: Wake Up Black America" documentary, a movie that's said to promote anti-Semitism, on October 27. He was later suspended by the Brooklyn Nets on November 3.

Later, Kyrie issued a sincere apology over his anti-Semitic controversy. Not stopping there, Kyrie made a hefty $65,000 donation to the family of Shanquella Robinson, a woman who tragically died during a birthday trip with several friends in Cabo, Mexico. Kyrie also gave away $50,000 to Devin Chandler's family. Devin was one of the three football players who died in the University of Virginia shooting.

Kyrie's suspension ended on November 20 as the star point guard suited up for the Brooklyn Nets game against the Memphis Grizzlies. Then, in his first interview since returning to the field, Kyrie said that he wants to share his opinion "without being harshly criticized or being labeled or dealing with outside perceptions that have nothing to do with me."