The 'Kiss Me More' singer tones down her outlandish appearances at Paris Fashion Week by wearing minimal makeup in new pictures shared on her Instagram page.

AceShowbiz - Doja Cat is taking a step back from her recent outlandish looks by embracing her flaws. After making jaw-dropping appearances during the Paris Fashion Week, the Los Angeles-born singer/songwriter has shown her freckles in new pictures.

On Thursday, October 6, the 26-year-old star took to her Instagram Stories and feed to share snaps of her seemingly wearing minimal makeup during her latest outings. While she appeared to be wearing a lip liner and drew thin lines in place of her shaved eyebrows, her freckles were visibly seen on her cheeks and nose.

In one of the photos, Doja rocked a brown sleeveless outfit with a pair of big earrings. She also had a pair of stylish sunglasses perched on top of her head while she held what looks like a white bag and looked straight into the camera. It's unclear where the photo was taken, but other images shared on the same day show her with similar accessories, while she completed her look with a white fur coat. 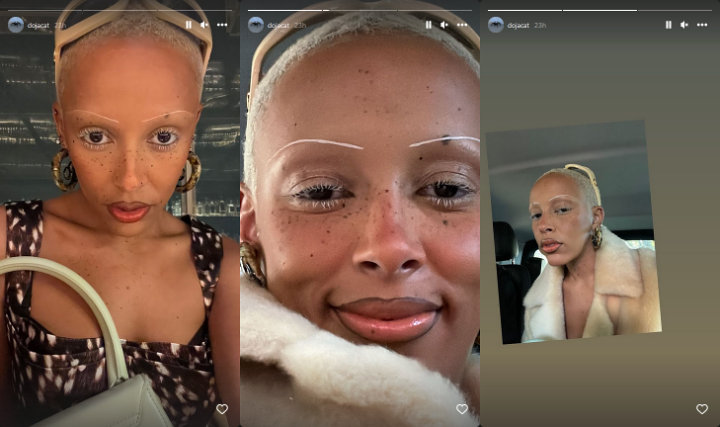 Later on, the "Mooo!" hitmaker traded the outfit for a purple tank top and a tan puff jacket with short jeans and black knee-length boots. She posed with a male friend for a mirror selfie. Some other images taken in a car feature her sporting a black halterneck top while accessorizing with a silver necklace.

Doja has experimented with makeup lately while making appearances at Paris Fashion Week. Stepping out for the A.W.A.K.E. Mode show on Tuesday, October 4 in Paris, France, she showed her striking look with her face and body covered in metallic gold body paint. Further adding to her flamboyant look, she sported a fitted with plaid burn suit and a furry floor-length jacket by Simon Miller.

But not all people were into Doja's bizarre makeup look. Calling her "ugly," one person commented, "This paint is making her look ugly. When you do make up like this you still to accentuate features. She look like a tired old status lmao."

Catching wind of the nasty message, the Grammy Award-winning artist quickly defended her makeup look. "I wasn't trying to look sexy or attractive. All of my makeup has a story and there are absolutely 0 rules and if there were you wouldn't be the one making them," she replied to the naysayer.