Sitting down for an interview about her podcast show 'Caresha Please', the City Girls member reveals her latest obsession as she reveals, 'I want to be the black Oprah.'

AceShowbiz - While it's not a sin to dream big, Yung Miami has been trolled after revealing her latest obsession. The one-half of City Girls has become the butt of the joke on Twitter after she revealed her dream to be the "black Oprah," citing Oprah Winfrey as her role model in the talk show industry.

Sitting down with XXL, Miami talked about her now podcast show "Caresha Please" and how it came together. "People just loving to hear me talk, you know? Whenever I talk or whenever I go on [Instagram] Live, it go viral," she shared. "So, one day I was talking with Diddy and he was like, 'Yeah, [you] should do a podcast. It would be good for you,' and that's how it came out. It was just a conversation of me just always going viral off the way I talk and the engagement that I used to get off of Instagram Live."

When speaking of a goal that she wants to accomplish with the new podcast endeavor, the 27-year-old admitted, "I want to take it to the next level. I want to be like-I think she has a podcast now-a person like Wendy Williams. I'm dreaming big. I want to go to the highest of the highest. I want to be the black Oprah."

It appears that Miami wanted to say the "next [Oprah Winfrey]" instead of "black Oprah," but Twitter wasn't that understanding. Social media folks quickly clowned the raptress for her quote gaffe, with one writing, "Next 'Black Oprah' is..…….crazy."

Another wasn't having it either as remarking, "Wanna be the WHAT?!?!...'The Black Oprah'....Caresha, please!" A third joked, "Idk I just might start saying 'I want to be the Black Oprah' to my family for fun."

Someone else found Miami's quote gaffe hilarious. "Caresha saying 'I want to be the black Oprah' is funny as hell to me", while another agreed as saying, "The Black Oprah is f**king hilarious. I legit screamed." 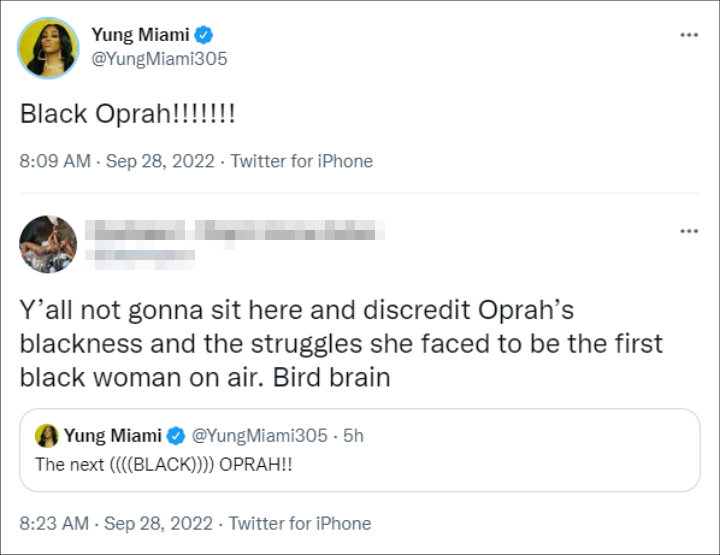 Miami later reiterated her dream via the micro-blogging site. "Black Oprah!!!!!!!" she exclaimed. When one person called her out by writing, "Y'all not gonna sit here and discredit Oprah's blackness and the struggles she faced to be the first black woman on air. Bird brain," the rumored flame of Sean "P. Diddy" Combs finally corrected herself, "The next ((((BLACK)))) OPRAH!!"