The 36-year-old former 'Full House' star appears to further fuel wedding rumors as he wears a gold band on her left hand during a sunny outing with her longtime beau.

AceShowbiz - Is Ashley Olsen now a married woman? It seems like the Row designer further fuels wedding rumors with boyfriend Louis Eisner after she was photographed wearing a gold band on her left hand.

In some pictures that circulated online, the "Full House" alum was seen vacationing with her beau in Pantelleria, Italy, on Sunday, August 14. The lovebirds hit the beach with friends as they soaked up the sun while tanning on the sand. They also enjoyed swimming in the ocean before taking a sunset boat ride.

During the outing, the 36-year-old star wore an over-the-knee striped, red shirtdress as her gold ring was on full display. Meanwhile, her boyfriend opted for a fitted, pale yellow T-shirt that he paired with dark washed jeans. During the sunny outing, the couple was twinning with baseball caps and dark sunglasses. 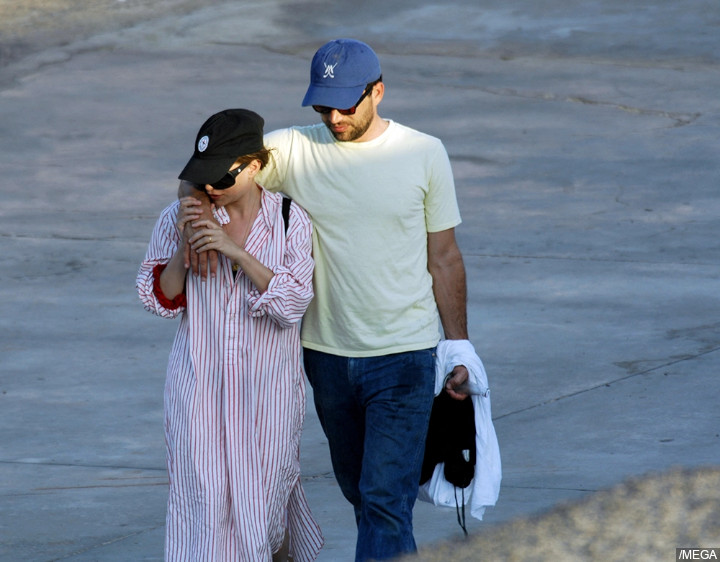 This wasn't the first time for Ashley to spark wedding speculation. Back in May, the California native was snapped sporting the classic, and understated, hardware on her ring finger during a day out in New York.

It remains unknown if the band indicates that the longtime couple has tied the knot as the former child star is notoriously private when it comes about her personal life. Her twin sister Mary-Kate Olsen also shares similar desire to remain low-key.

Earlier this year, the sisters opened up in a rare interview about their efforts to remain "discreet" in their adulthood. "We were raised to be discreet people," Mary-Kate said.

Ashley added, "I think that potentially that's just our aesthetic, our design preference. But that doesn't mean that we don't also appreciate something truly ornate or maximal. Sometimes a collection even starts quite like that, and then gets pared down. It doesn't always start from that simplistic place."

During the interview, the elusive twins also admitted that they didn't even want to be the faces of their own design brand. "We didn't want to be in front of it, we didn't necessarily even want to let people know it was us," Ashley noted.