The 'I Try' hitmaker insists she 'wasn't defining trans women. just women' after saying on 'Piers Morgan Uncensored' that 'just because you go change your parts, it doesn't make you a woman.'

AceShowbiz - Macy Gray doesn't backtrack on her comments about trans issue which have landed her in hot water. The R&B singer has noticed the backlash and spent some time responding to the criticism directed at her via social media.

The 54-year-old appeared to defend her view as she replied, "truth hurts" to India Willoughby's tweet which read, "As for Macey - how to kill what's left of your career." The trans newsreader also slammed Piers Morgan for bringing up the issue on his talk show, "Have you only got ten questions Piers? Same to every guest. No wonder you're tanking. Don't ever say 'I'm not transphobic' again. Total chicken." 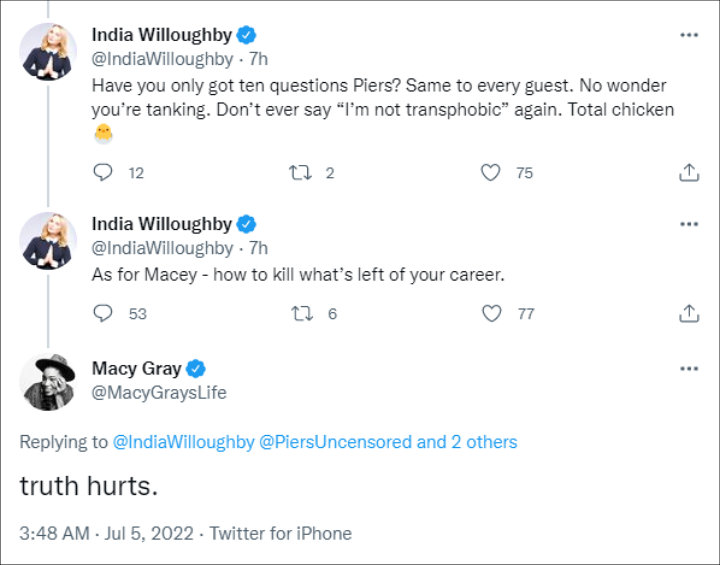 Macy Gray responded to criticism on her comments about trans issue.

Responding to another now-deleted tweet, Macy claimed that she is an "admirer" of the LGBTQ+ community. "There is no bigger admirer of lgbt community than your truly. it takes real balls to be honest about who you are," she wrote, before explaining her controversial comments, " 'woman' is a title that you earn and become. just like 'man.' there are plenty of females who aren't women yet and every girl gets that." 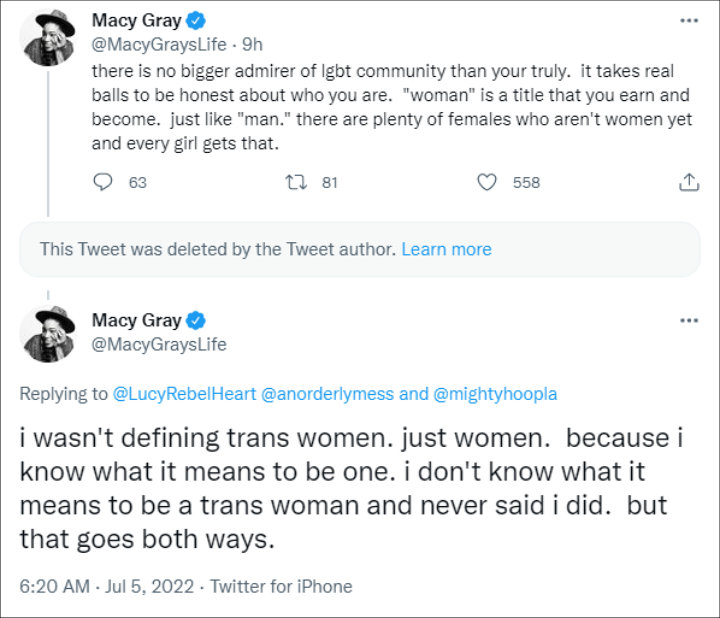 The singer defended her view on trans issue.

Macy weighed in on trans issue during her appearance on TalkTV's "Piers Morgan Uncensored". "I will say this and everybody's gonna hate me but - as a woman - just because you go change your parts, it doesn't make you a woman, sorry. I know that for a fact," she voiced her disagreement to an opinion that a person can be classed as biologically female after surgery. "A woman is a human being with boobs. How about you start there? And have a vagina!"

The "Sweet Baby" songstress went on to explain that while she will call someone by their chosen pronouns to appease them, it still does not change the facts and claimed that there can be "a lot of judgment" for those who "just say it how it is." She added, "You want me to call you a 'her,' I will. Because that's what you want but that doesn't make you a woman just because I call you a 'her' and just because you got surgery. I don't think you should be called transphobic just because you don't agree."

Macy's comments quickly stirred a debate among social media users, with a critic saying, "Nobody cisgender should ever speak on the transgender experience. Nobody. Macy Gray chose chaos and she will pay for it." Another compared the singer to J.K. Rowling, "Just like @jk_rowling - it seems that @MacyGraysLife is just as transphobic. Not cool!"

Others, however, defended Macy for "speaking the truth." One of them tweeted, "The gays and trannies upset with macy gray and [Bette Midler] for speaking the truth. Sissies go take your truvada and sit down." Another similarly tweeted, "Queen Macy Gray speaking all facts."