Morgan Night, who owned a luxury trailer park that the 'Pirates of the Caribbean' star, his ex-wife and their friends visited in 2013, testifies that he 'never saw' the actor 'get physical' with the 'Aquaman' actress.

AceShowbiz - A witness in Johnny Depp's defamation case called Amber Heard "jealous and crazy" on Twitter before he appeared in court. Taking to the stand in Fairfax, Virginia, on Tuesday, May 24, Morgan Night confirmed that he wrote a critical tweet about the "Aquaman" actress on April 21.

Night took to Twitter in response to a post from an account called @ThatUmbrella. The original tweet read, "Depp said she had 'taken happy something.' Deep is accused of 'removing her hand and yelling at Amber.' (sic)" In response, the motel owner wrote on the micro-blogging platform, "That never happened. I was with them all night. Amber was the one acting all jealous and crazy. (sic)" 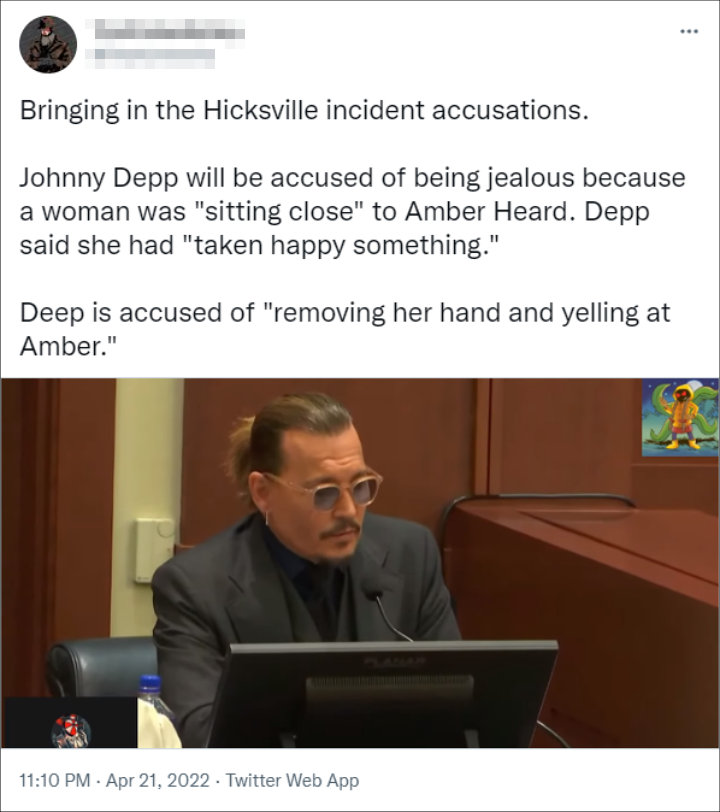 Morgan Night responded to this tweet ahead of his court appearance.

Night, who was called to the stand by Depp's legal team, owned a luxury trailer park that the actor, Heard and their friends visited in 2013. Heard previously alleged that her ex-husband grabbed a female friend of hers by the wrist at the Hicksville trailer park, but Night rubbished that claim, saying that he "never saw Depp get physical with anyone."

Later, Night recalled witnessing an argument between Depp and Heard. He said, "She was upset at him and she was yelling at him ... He was kind of cowering and seemed almost afraid, and it was really, like, odd to see because he was older than her obviously, but I just went back in the house."

Night also caused laughter in the courtroom when he admitted he's not a fan of the actor. He was initially asked, "You are a pretty big fan of Johnny Depp, aren't you?" And in response, Night said, "I am not."

Heard is counter-suing her ex-husband after Depp sued her for defamation over a 2018 article she wrote about being a victim of domestic abuse. The trial is set to conclude in late May.

Johnny Depp Tries to Settle Assault Case Out of Court