The Ginny Weasley depicter in the 'Harry Potter' film series shows off her dark blue square diamond band on social media while announcing that she's now a married woman.

AceShowbiz - Bonnie Wright is officially a married woman. When revealing that she has married her boyfriend Andrew Lococo, the Ginny Weasley depicter in the "Harry Potter" film series flaunted her unique wedding ring on social media.

Making use of her Instagram account on Sunday, March 20, the 31-year-old English actress placed her hand over her now-husband's hand as she showed off their wedding bands by a pool. Her ring is a dark blue square diamond while her partner's is a simple gold band. She announced the happy news in the caption that read, "Yesterday was the best day of my life [blue heart emoji] thanks to my husband!!"

Sharing more details of her wedding day, Bonnie took to her Instagram Story to post a glimpse look at the guest's table. In a photo she reposted from her wedding photographer, Kacie Tomita, it could be seen that the table was decorated with white tablecloth as well as beautiful buckets of pink flowers. Rosegold-colored napkins were also seen on the top of the guest's plates. 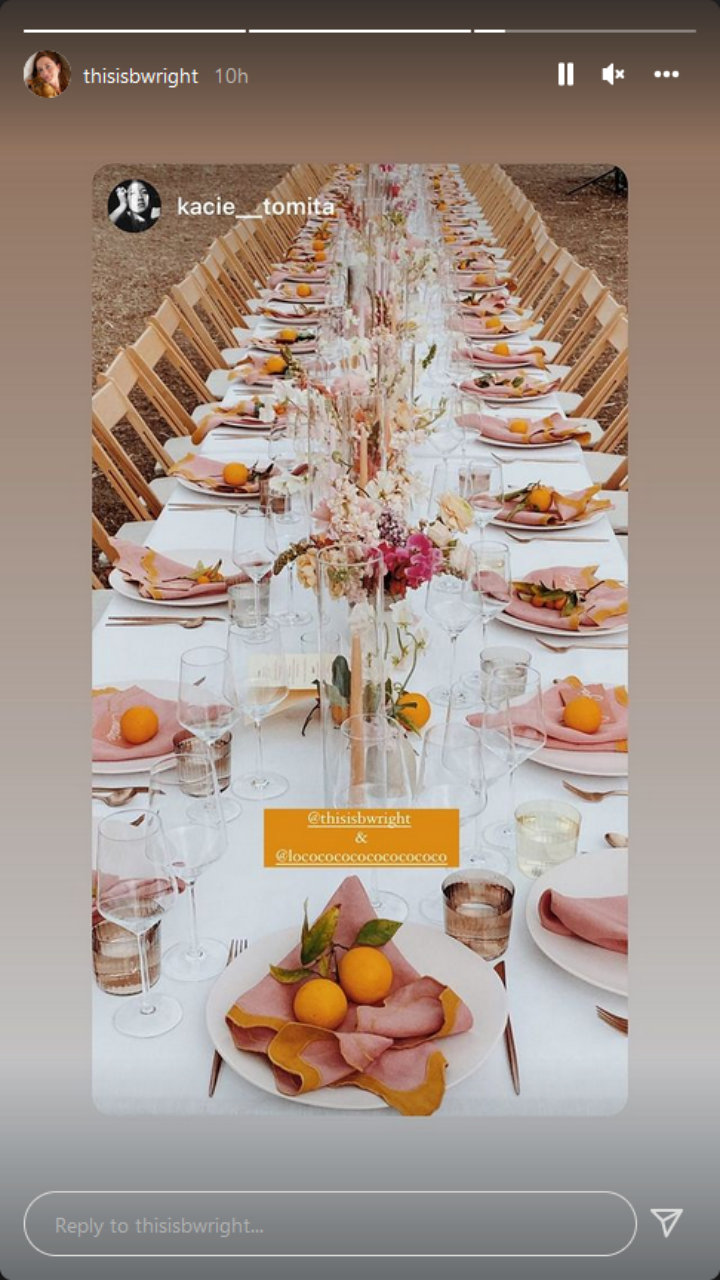 Bonnie Wright shared a glimpse at her wedding via Instagram Story.

Many of her "Harry Potter" co-stars sent her congratulatory messages in the comment section of her post. Tom Felton, who starred in the hit franchise as Draco Malfoy, wrote, "Congratulations B xx." In the meantime, James Phelps, who played her on-screen brother Fred Weasley, left a pair of celebratory emojis.

Afshan Azad, who played Padma Patil, penned, "Love you so much," along with a series of red heart emojis. Scarlett Hefner, who starred as Slytherin student Pansy Parkinson, chimed in, "Congratulations to you both!"

Bonnie went Instagram official with Andrew in September 2020. The "Stranded" actress told her fans last month that she had left Los Angeles to live in San Diego with her partner. "Andrew and I had been going back and forth between these two cities for a long time, so we were ready to live in the same place," she shared in a YouTube vlog at the time. "This is Andrew's house, which is now our house. He has lived here for 10 years [and] has a beautiful garden. He's looked after it very well."

Previously, Bonnie was engaged to her "Harry Potter" co-star Jamie Campbell Bower from 2011 to 2012. "After the Dark" actress was later linked to "Glee" actor Jacob Artist and entrepreneur Simon Hammerstein.