Britney Spears Pens an Emotional Letter to Sister Jamie Lynn: 'I Love You'

Following a back-and-forth online, the 'Toxic' singer reveals in an emotional letter to her younger sister Jamie Lynn that she adores her and that she still has love for her.

AceShowbiz - It seems like Britney Spears and her sister Jamie Lynn Spears are heading toward a reconciliation. Following a back-and-forth online amid their ongoing family feud, Britney took to her Twitter account to share an emotional letter to Jamie Lynn in which she revealed that she still has love for her younger sister.

"Jamie Lynn... I don't think your book is about me at all...I said some harsh things because you obviously hurt me by the things you are making up about me !!!" the "...Baby One More Time" hitmaker wrote in the Saturday, January 15 post. "When I said only a scum person would make up things like that about someone, I could have sworn I said 'but you're not.' "

She referred to her previous tweet after watching the "Zoey 101" alum's recent interview for ABC News. "NOW and only NOW I do know only a scum person would make up such things about someone. I'm actually very confused about you making that up because it's honestly not like you at all !!!!" so Britney wrote on Friday.

Meanwhile, in her latest post, Britney added, "I know you worked hard for the life you have and you have done amazing !!!!! But I think that we would both have to agree to the fact that the family has never been remotely as hard on you as they have been on me !!!" The pop star continued, "What Dad did to me, they don't even do to criminals ... so for you to sit back and act completely aloof to what has happened to me is honesty [sic] insane to me !!!"

"We are supposed to have each other's back," Britney continued. "All I know is I love you unconditionally !!! So go ahead and say whatever you want ... it's so tacky for family to fight publicly like this !!!" 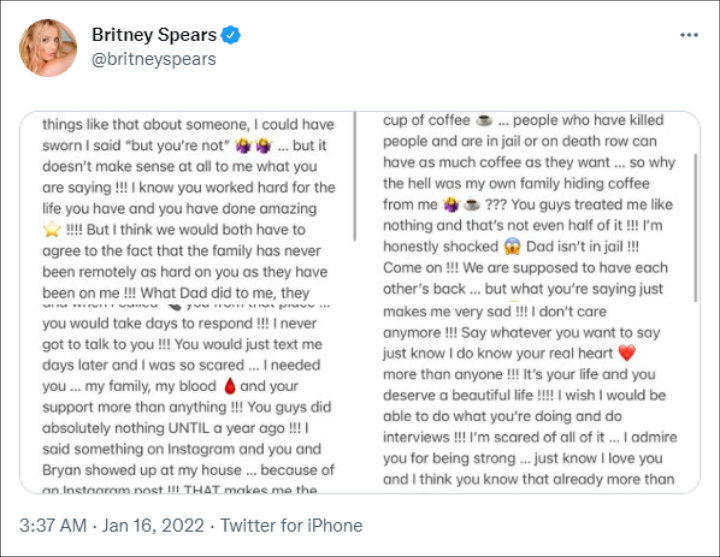 Meanwhile, Jamie Lynn appeared to be wanting to end the family drama as soon as possible. Writing on her Instagram Stories on the same day, she urged her sister to call her instead of going public. "I have attempted many times to speak to you directly and handle this privately like sisters should, but you still choose to do everything on a public platform," she said.

"In the meantime, please stop continuing the narrative that I haven't been there for you or that I'm making things up," the "Sweet Magnolias" star added. "I'm happy to share how many times I've reached out to you, supported you and tried to help you. This is embarrassing and has to stop. Love you."