The 'Teen Mom' star says that she finds it 'terrifying and traumatizing' that she is 'attacked and harassed' following an alleged assault with a security officer outside Grandmaster Records club.

AceShowbiz - Farrah Abraham has weighed in on her arrest after she allegedly slapped a security guard while dining at a club in Los Angeles. In her statement, the "Teen Mom" star said that she's "tired" of being "maliciously attacked."

"I'm tired of being maliciously battered, attacked, conspired against while having dinner at Grand Master Records," the 30-year-old told E! News while on her way to church on Sunday, January 16. She then pointed out, "This was a private persons arrest."

Farrah shared, "My lawyer is handling from here." She also noted that "it is terrifying and traumatizing that people attack me and I cannot even enjoy dinner as I'm the only person out of three attacked and harassed."

"I look forward to court, as always," Farrah stressed. The former star of "16 and Pregnant" went on to add, "This is why I'm getting a law degree to protect myself yet again from conspired attacks."

Farrah was taken into custody on Saturday after she allegedly assaulted a security officer outside Grandmaster Records club, where she and a friend were partying. While police officers were not initially called to the scene, a bystander made a citizen's arrest and Emergency Medical Technicians (EMTs) were called, TMZ reported.

Police records showed Farrah was placed on a citizen's arrest just after midnight and booked on a charge of misdemeanor assault by Los Angeles Police officers. However, she was released from custody less than two hours later. She is due in court on May 19.

Following the arrest, Farrah posted videos of the incident on her Instagram account. Taking to her Story, she wrote, "I will never understand sexism & sexist hatred. To all the men who wish me wrong I give it to the 1 who created us all. I CARE FOR MEN & WOMAN EVERY DAY EQUALLY."

"Why is a male on top of me holding me down when I was walking. This is scary and he should be fired and in jail for [battery]," Farrah captioned a clip of her being pressed face down by a man. She further stressed, "I'm tired of people harassing me, holding me down, hurting me and [lying] about me … it's scary, it [affects] mothers, it is traumatizing and I'm hurt."

Farrah also alleged in her Story that she had made a reservation for dinner at the venue, and after the incident, she claimed to have been injured amid the altercation. "Bruised and beaten at dinner," she claimed, alongside photos of her bruised skin. "Stop attacking and hurting woman." 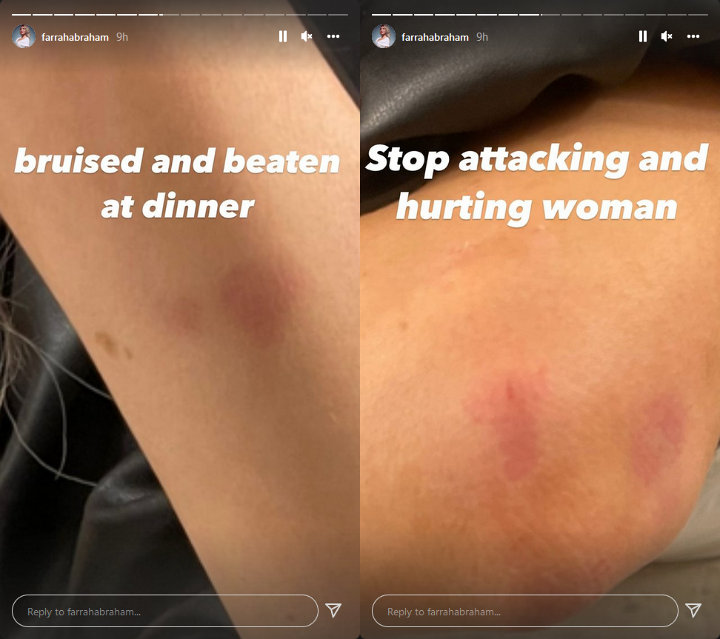 In a statement posted on her page, Farrah explained her decision to share details from her arrest. She penned, "I post this as no woman or man should ever be battered, abused, conspired, ganged up on, set up, recorded, and video sold."

Farrah went on to note that she's "putting a restraining order" on the man who "made this dinner reservation and conspired an attack on myself with the staff at @grandmaster_recorders as it was a 'private persons arrest' complete setup." She added, "I've had a very traumatizing year and I don't deserve to be attacked, bruised, men on me, and battered."

"As a single mother to be harassed, battered, and conspired against as a paying customer. … I thank the HOLLYWOOD police for rescuing myself from being held against my will and being attacked, I NEEDED HELP," Farrah shared. "I couldn't even use my phone."

Near the end of her post, Farrah said, "I look forward to my law degree and I look forward to court. Justice will be served as always. [Women] it is a scary unsafe world we live in, act upon your rights and always care for others even when everyone hurts you and attacks you." The mother of 12-year-old Sophia concluded her post, "You are resilient and you are stronger [than] all of the weak people out there who hurt and traumatize us."