The former star of 'Zoey 101' is receiving an 'awful' social media direct message after her older sister made headlines for unfollowing her on Instagram despite her attempt to fix their relationship.

AceShowbiz - Jamie Lynn Spears is proving that she will always stand up for her kids. Taking to her social media account, the former star of "Zoey 101" has fired back at a hateful online troll who wished her underage daughters to get raped.

On Monday, January 3, the 30-year-old mom took to her Instagram Story to share a screenshot of a direct message she got from one user. In it, the said person sent her DM that read, "White trash b***h. I hope your daughter gets raped. Both of them." In response, the mom of two wrote back, "Man that's awful."

Over the screengrab, Jamie Lynn penned, "I've gotten beyond use [sic] to receiving the love and the hate from strangers, since before I ever even had a choice at the age of like 8." She continued, "So growing up I had to learn to acknowledge the hate, and rise above the evil and NEVER give the negativity the attention it so desperately wants, but this is one of ones I can't just brush off."

"You may not love me, and that's fine," Jamie Lynn added. The "Sweet Magnolias" star then stressed, "THIS shouldn't be tolerated under any circumstances, much less about innocent underage children."

After revealing the mean DM, Jamie Lynn noted in a following Story that she believed the negativity she received would bring something positive to others. "I know I am blessed beyond measure, and I have so much to be thankful for," she wrote. "I can't complain when there are much more important things to focus on in today's world."

"So let's all do one kind thing for someone else today and just maybe this negativity will bring along something positive to someone who needs it," Jamie Lynn shared. The Mississippi-born actress concluded her post, saying, "Love y'all." 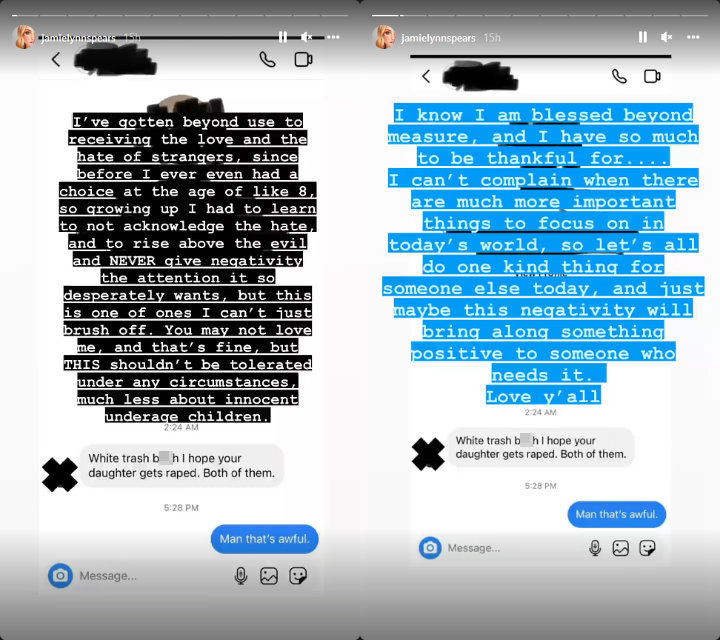 Jamie Lynn Spears called out mean troll who wished her underage daughters to get raped.

Jamie Lynn has been the target of social media trolls since her older sister, Britney Spears, called out their family for the pain they caused to the pop star during her 13-year conservatorship battle. Last October, the "Toxic" hitmaker appeared to shade her sibling over her forthcoming memoir "Things I Should Have Said". The book was previously titled "I Must Confess", a lyric from the singer's 1998 debut single, "…Baby One More Time".

"I'm thinking of releasing a book next year," Britney, who recently unfollowed Jamie Lynn on Instagram, joked, adding, "But I'm having issues coming up with a title so maybe my fans could help !!!!" She continued, "Option #1 … 'S**t, I really don't know' Option #2 … 'I really care what people think' !!!! What do you guys think ????"

Of the situation, a source said at the time, "It's sad to say, but Britney isn't all that surprised that Jamie Lynn is using this opportunity with the media spotlight on their family to promote her own book." The informant continued, "All she ever wanted was to support her family before [the conservatorship] began." The insider went on to say, "What saddens Britney the most is that Jamie Lynn isn't even using this opportunity to speak out in support of her."

As for the reason why Britney decided to hit the unfollow button on Jamie Lynn's Instagram page, a source spilled to HollywoodLife.com that the 40-year-old star "has no plans to reconcile with her sister, mother, or her father at this time." The informant added, "She doesn't foresee herself having a future with any of them, as they all, directly or indirectly, are responsible for the years of psychological torment that she went through."

"They all allowed this to continue knowing that it was hurting her," the so-called inside source told the outlet. "She doesn't see how this will ever be forgivable because, if not for her fans and those who truly love her, she would still be in the conservatorship."