DaniLeigh Debunks Claims That She Doesn't Consider Herself Black: It Doesn't Make Sense

After a writer, Blue Telusma, reveals that the 'Yellow Bone' songstress told her, 'I don't consider myself black, but I like black music and black men,' the singer insists she 'would never say something like that.'

AceShowbiz - DaniLeigh is once again facing colorism allegation. Months after the backlash over her controversial song "Yellow Bone" has died down, a writer has revealed that the singer allegedly stated she doesn't consider herself black.

Blue Telusma, who is also a Hollywood Unlocked co-host, said in a recent "Uncensored" edition that Dani allegedly made the claim directly in front of her face. She said it happened several weeks before "Yellow Bone" was released, when they had a panel discussion about the Afro-Latina experience.

Behind the scenes, Blue recalled, "She told me directly to my face, 'I don't consider myself black, but I like black music and black men. And I wish black women weren't so jealous about it.' She said it to my face."

The writer said she warned Dani, "Sis, I need you to never said that in public." She additionally tried to tell the Miami-born star that she needed more education around the Afro-Latina experience. But a couple of weeks later, the song came out and Blue said she came to the conclusion that "she didn't listen to me."

DaniLeigh has caught wind of Blue's claims and it didn't take long for her to respond. Commenting on a clip of the "Uncensored" edition, she shared her side of the story, "In the Interview I say I'm Afro Latina … why before the interview would I say some wild s**t like that? That's not my character."

She went on stressing, "There were 5 other women on that panel.. get them to vouch! I would never say something like that, it don't even make sense."

After a screenshot of her response was posted on Hollywood Unlocked's Instagram page, Dani once again fired back at the allegation. Blaming the public and media for always portraying her in a bad light, the 26-year-old lamented, "Lord …. I just will never get away from this… y'all want me to be such a evil person and have such a ugly heart but it's not gon happen.."

She went on stating, "no one on this internet has met me in real life ! It's unfortunate this is something that's being brought up to bring me down . Cause it's so nasty. I don't even like addressing it to bring it attention, but it's like calling me a rapist, when I didn’t do it . F**k man." 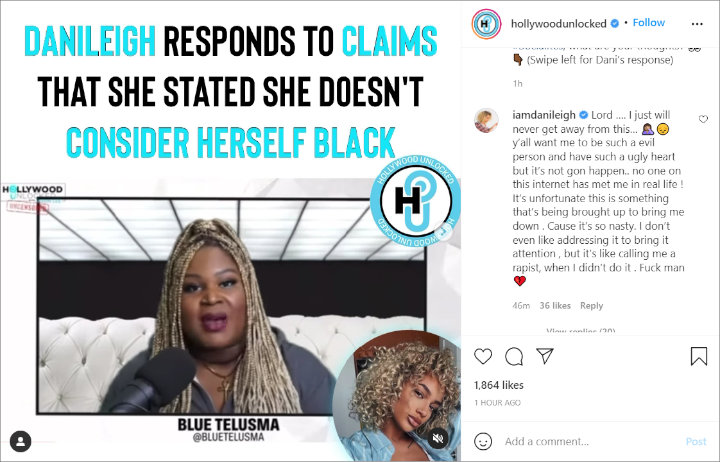 DaniLeigh once again responded to allegation that she doesn't consider herself black.

Dani came under fire following the release of her song "Yellow Bone", which she composed to celebrate "my light skin baddies," in January this year. At the time, she described herself, "I'm Dominican... I'm Spanish, I'm black I'm white."

She later apologized for the song, saying it was never intention to "bash another woman, another skin tone." She added, "I wasn't brought up like that, I never looked at my skin as a privilege. I never looked at me as 'I'm better than somebody because of my skin tone.' "