AceShowbiz - Ireland Baldwin slammed "insensitive" journalists who reached out to her for interviews in the wake of fatal accident involving her father Alec Baldwin on the set of "Rust". On Friday, October 22, the model took to her Instagram account to share a screenshot of a "freelance journalist" who contacted her for an interview despite knowing that "it's a sensitive time."

"I was hoping to possibly do an interview with you. Obviously I would make it beneficial for the both of us, but I know it's a sensitive time," the reporter wrote to the model. "Of course you're Alec's daughter, so anything you have to say on the situation would be important."

The journalist added, "I would obviously tread carefully and be respectful of everyone involved. If you want you can call me."

Ireland wasn't impressed though as she wrote on her Stories, "To the handful of journalists who have been contacting me, you're despicable and insensitive." She went on to note, "To anyone who's been giving out my number. please lose it and don't contact me again."

Later in a separate post, Ireland shared support for the family of Halyna Hutchins, the director of photography who was killed after Alec accidentally misfired a prop gun on "Rust" set. "My love and support go to Halnya Hutchins' family and friends," she penned. As for injured director Joel Souza, the 25-year-old sent "healing thoughts," before concluding, "And wishing I could hug my dad extra tight today." 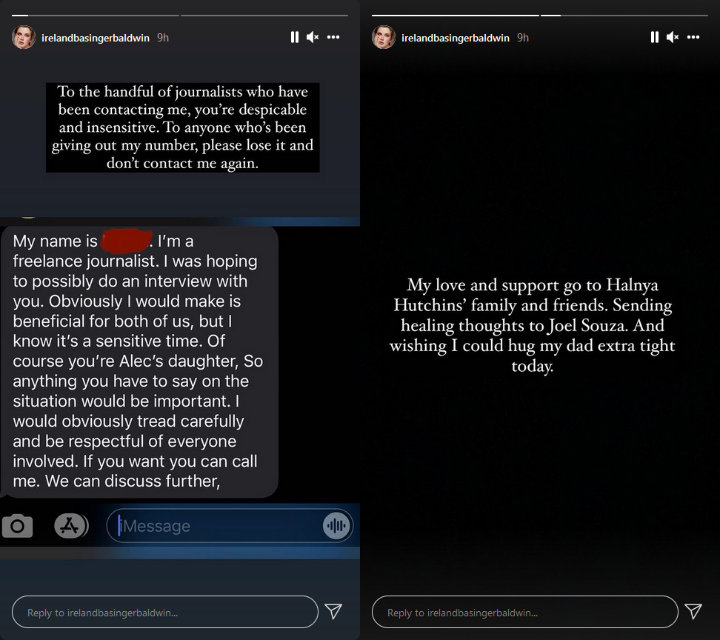 Other Baldwin family members also broke her silence on the matter. Taking to Instagram Story, Hailey Baldwin wrote, "Sending all my love to the family of Halyna Hutchins. This is a truly unimaginable and devastating tragedy. My thoughts are also with Joel Souza as he recovers. I am absolutely heartbroken for everyone involved."

Hailey's actor dad Stephen Baldwin also issued a statement following the tragedy. "Asking for your prayers tonight friends not much can be said other than please pray for all involved in the wake of this tragic accident thank you," so he wrote on Instagram.

Alec, meanwhile, took to Twitter on Friday morning to express his condolences to the director of photography's loved ones, after the tragic accident on the Santa Fe, New Mexico set of the western movie. "There are no words to convey my shock and sadness regarding the tragic accident that took the life of Halyna Hutchins, a wife, mother and deeply admired colleague of ours," the former "Saturday Night Live" cast member wrote.

"I'm fully cooperating with the police investigation to address how this tragedy occurred and I am in touch with her husband, offering my support to him and his family. My heart is broken for her husband, their son, and all who knew and loved Halyna," he added.