When reacting to the outrageous request that reads, 'ayoooo kidnap me,' the Joe Goldberg depicter says that the combination between 'ayoooo' and 'kidnap me' gives off a unique vibe.

AceShowbiz - Penn Badgley has reacted to an outrageous request from "You" fans. When replying to a fan, who asked to be kidnapped, the Joe Goldberg depicter on the hit series said that he's "not mad."

On Tuesday, October 19, the former "Gossip Girl" star took to his Twitter account to reply to a tweet from his fan that read, "Ayoooo kidnap me." He jokingly wrote, "Idk why but when 'kidnap me' is prefaced by 'ayoooo,' it has a completely different ring to it and I'm not mad."

The social media exchange continued when a reporter sent crying emojis in response. Penn replied, "This is growth, right? For everyone." The reporter then wrote back, "We're getting there! You know, as a society." 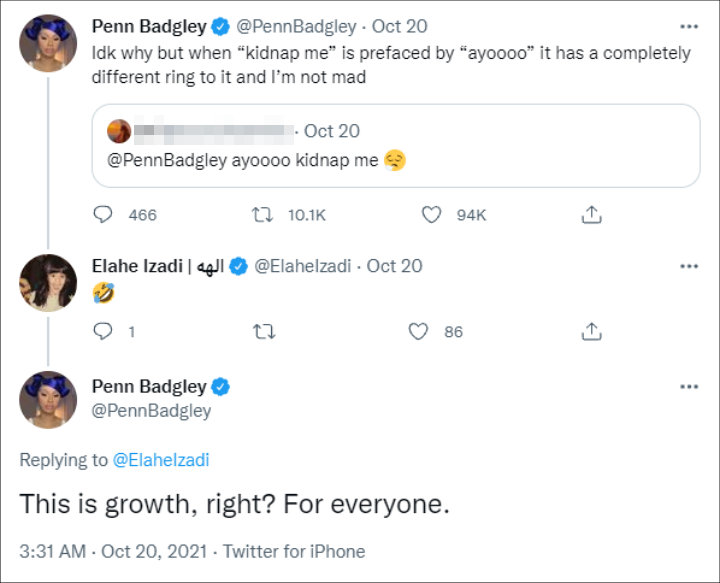 Penn Badgley reacted to an outrageous request from 'You' fan.
See also...

Season 3 of the hit Netflix series debuted on Friday, October 15. The "Easy A" star previously revealed that he wasn't thrilled with fans rooting for his character, who repeatedly stalks and kills people. After season 2 was released on Netflix in December 2019, the actor explained that Joe doesn't deserve any sympathy from the audience.

"Joe is not actually looking for true love," he said at the time. "He's not actually a person who just needs somebody who loves him. He's a murderer! He's a sociopath. He's abusive. He's delusional. And he's self-obsessed."

During a January 2019 press event with "You" co-star Shay Mitchell, Penn also spoke about his character being able to use the instant access of social media to his advantage. "I think Joe reveals the unsettling logic that actually a lot of us are following -- in the worst way -- on social media," he shared.

"But, then I think in the best way it is a tool and there's nothing inherently wrong about that tool at all," Penn continued. "In fact, I see really admire people like Shay, who have an authentic relationship where it's like, fluent. See me when I try to do something on social media? It's pathetic."