The 'I Am Not A Woman, I'm A God' hitmaker, who welcomed first child with screenwriter boyfriend Alev Aydin in July, has hinted there could be more children on the horizon.

AceShowbiz - Singer Halsey wants to ink their entire belly, but is holding off in case more babies are ahead.

The "I Am Not A Woman, I'm A God" hitmaker - who uses both "she" and "they" pronouns - welcomed their first baby, Ender Ridley, with screenwriter boyfriend Alev Aydin in July, and has now hinted there could be more children on the horizon.

On Thursday, October 7, they tweeted, "I wanna tattoo my whole stomach but I think I gotta wait until I'm 'done having kids' cause some of my existing belly area tattoos have already seen better days." 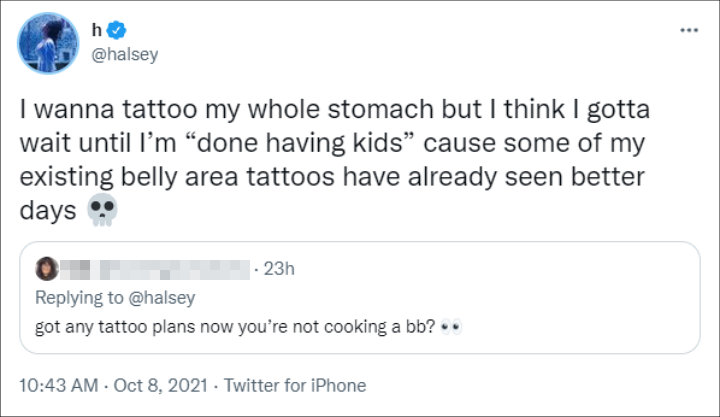 Halsey revealed that they want to get her entire belly tattoed.
See also...

In a separate Twitter post, Halsey answered frequently asked questions on the topic. "1. They look like that cause I'm breastfeeding," the "Bad at Love" singer explained. "2. Yeah I can't believe it either 3. Yes they get in the way 4. No I don't know if they'll go back to normal ever 5. Yep they hurt 6. Yes it's weird to look different then [sic] I'm used to 7. Yes I'll probs delete this." 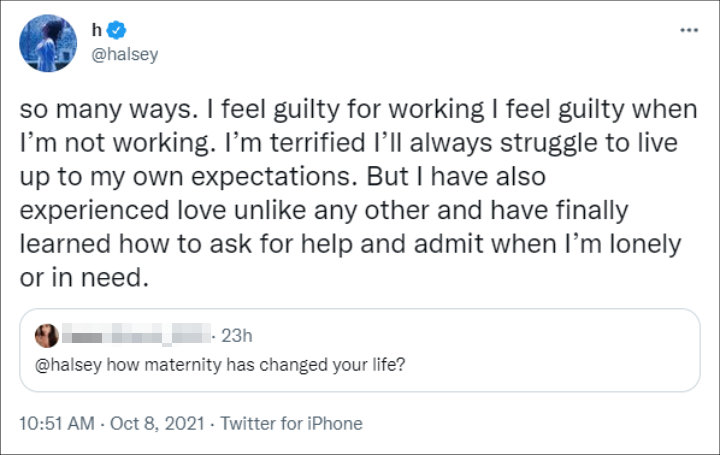 Halsey shared that they often feel guilty as a new mother.

Replying to a tweet asking how maternity has changed their life, Halsey explained, "so many ways. I feel guilty for working I feel guilty when I'm not working. I'm terrified I'll always struggle to live up to my own expectations. But I have also experienced love unlike any other and have finally learned how to ask for help and admit when I'm lonely or in need."

Halsey: Being A Mother Makes Being A Musician Seem Pretty Boring