Jana Kramer and Jay Cutler Split After Things 'Fizzle Out'

After news of her breakup broke, the former 'One Tree Hill' actress shares cryptic posts about being left and given 'the lessons' to grow on her social media platform.

AceShowbiz - Jana Kramer and Jay Cutler may have called it quits. The "One Tree Hill" alum, who was first romantically linked to the former NFL quarterback in early September, reportedly split from her rumored boyfriend after things seemed to "fizzle out" between them.

"Jana is still single," an insider told Us Weekly on Wednesday, September 6. "She and Jay went on a few dates, but things seemed to fizzle out between them. They're not seeing each other anymore."

Doubling down on the breakup speculations, a separate source told PEOPLE that "they went on a few dates but in the end Jana is still single." The informant went on to add, "They realized they're better off as friends than dating."

Shortly after the news broke, Jana took to her Instagram Story to share cryptic posts about breakup. In one snap, she reposted a quote that read, "One day, you will realize that it had to happen, in that way, to give you the lessons you needed to grow. What doesn't break you forever only makes you better."

In a following Story, Jana posted wise words from Nakeia Homer. "What if they left because you've been praying for change? What if it fell apart so other things could fall into place?" read the quote. "What if it was removed so it could be replaced? What you are experiencing right now could be answered prayers." She also added a GIF that read, "Love this!" 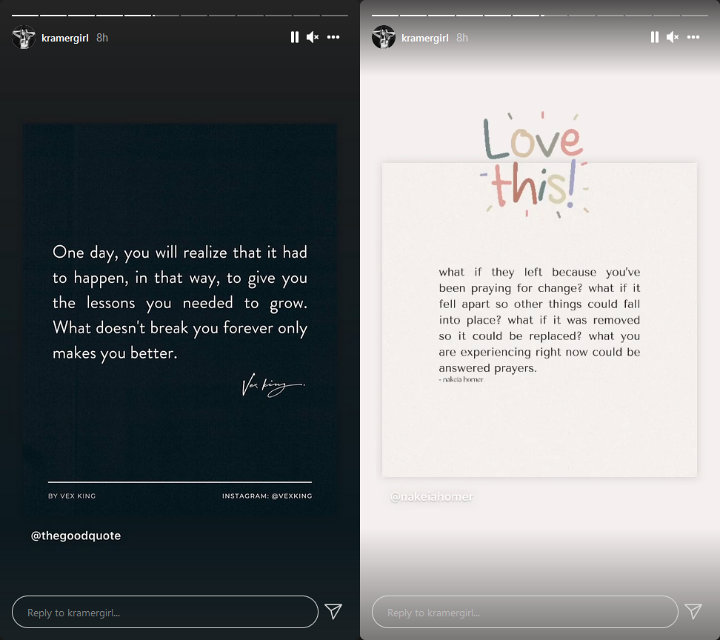 Jana herself appeared to hint at her relationship status on October 5. Alongside an Instagram photo that saw her waving her hand at the camera while her pals Jessie James and Eric Decker shared a kiss, she wrote, "Hi. My name is third wheel."

"It's so fun being the single third wheel these days," Jana further stressed on her romance status. The "Dancing With the Stars" alum added, "But seriously love @jessiejamesdecker & @ericdecker and I'll gladly third wheel with them cause there is no shortage of laughter and wine."

Jana and Jay made headlines after they were caught going on several dates which prompted a buzz on social media because of Jana's alleged friendship with Jay's ex-wife Kristin Cavallari. At the time, a source claimed, "So far it's just been one date. Kristin and Jana are just acquaintances and have only met twice. They're not friends."

Another source, however, insisted that Jana leaned on the "Very Cavallari" alum, following her rough divorce from ex-husband Mike Caussin. The second source went on to say that going on date with Jana was Jay's way to make Kristin jealous.

"Jay was trying to make Kristin jealous by going on this public date with Jana. He's not happy she's dating [Chase Rice] and has been trying to get Kristin back," the informant claimed. Amid the romance rumors, it's reported that Kristin blocked Jana on social media but Jana was seemingly unbothered.