Chuck D Insists He's 'Not R. Kelly Fan' After Being Accused of Defending Him

In his statement to clarify his remarks, the Public Enemy frontman states that the 'I Believe I Can Fly' hitmaker's actions 'were criminal' and makes it clear that he's not getting any of his songs.

AceShowbiz - Chuck D makes it clear that he is not defending R. Kelly. After landing in hot water for comparing the "I Believe I Can Fly" hitmaker to Rick James and Ike Turner, the Public Enemy frontman insisted that he is "not R. Kelly fan."

"JUST TO BE CLEAR, I'm not the R Kelly fan here," the 61-year-old rapper wrote via Twitter on Tuesday, September 28. He then pointed out, "75 million sold somewhere & I ain't got 1 of his songs."

Chuck, whose real name is Carlton Douglas Ridenhour, further stressed that R. Kelly's action "actions were criminal." He went on issuing an apology as saying, "My apologies if the wings of perception loomed beyond than the words on this slaveApp. My clarity launches on my own RsTvapp Oct1." 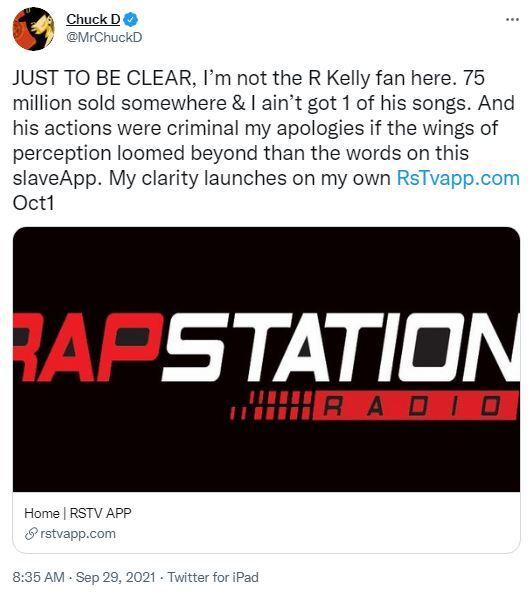 Chuck faced backlash after he weighed in on R. Kelly's sex trafficking case. Following the R&B artist's conviction on all counts relating to sex crimes and racketeering, the "Harder Than You Think" rapper tweeted, "Abused in his youth… an addict as an adult… Ike Turner served 18 months in prison.. Rick James did similar time."

"Ike came out a changed positive human being," Chuck continued. He then added a question, "How long should R Kelly spend in prison - and does a U.S.A system give a man a chance for a man to change his world around?"

Shortly after Chuck posted his thoughts, many social media users poured their thoughts against Chuck. Drew Dixon, subject of HBO's "On the Record" documentary which details her history of abuse by Russell Simmons, called him out for "twisting logic into a pretzel."

"@MrChuckD is twisting logic into a pretzel to argue for the rehabilitation of an unrepentant child rapist," Drew tweeted. She added, "Why isn't he focused on repairing the trauma inflicted on the Black victims assaulted by R. Kelly? Why don't they matter? This is toxic, anti-Black, and exhausting."

Lindsey Boyland, who was the first woman to speak out in the accusation of Andrew Cuomo's sexual harassment, said, "I'd suggest not tagging people who have been harassed/abused in posts about harassment/abuse."

"Ask yourself: what can you do personally, without their help, to end harassment/abuse? If you need their help, send them a dm requesting help," Lindsey pointed out. "Being thoughtful is being productive."

Chuck D: Seeing Donald Trump Being Elected President Was a Call to Arms