According to a White House official, Nicki is offered a phone call, not a visit, with the medical experts to answer questions she has about the 'safety and effectiveness of the vaccine.'

AceShowbiz - Nicki Minaj is getting closer to having all the answers to her questions about the COVID-19 vaccines. The "Super Bass" rapstress will have a phone call with the medical experts from the White House, not a visit as she claimed previously, after her Twitter post alleging the vaccine causes impotence went viral.

On Thursday, September 16, a White House official confirmed that they offered the 38-year-old rapper a call to discuss vaccine safety. "As we have with others, we offered a call with Nicki Minaj and one of our doctors to answer questions she has about the safety and effectiveness of the vaccine," the White House official stated.

Previously, Nicki claimed that she was "invited" to the White House and indicated she was going. "The White House has invited me & I think it's a step in the right direction. Yes, I'm going. I'll be dressed in all pink like 'Legally Blonde' so they know I mean business. I'll ask questions on behalf of the ppl who have been made fun of for simply being human. #BallGate day 3," she tweeted on Wednesday. 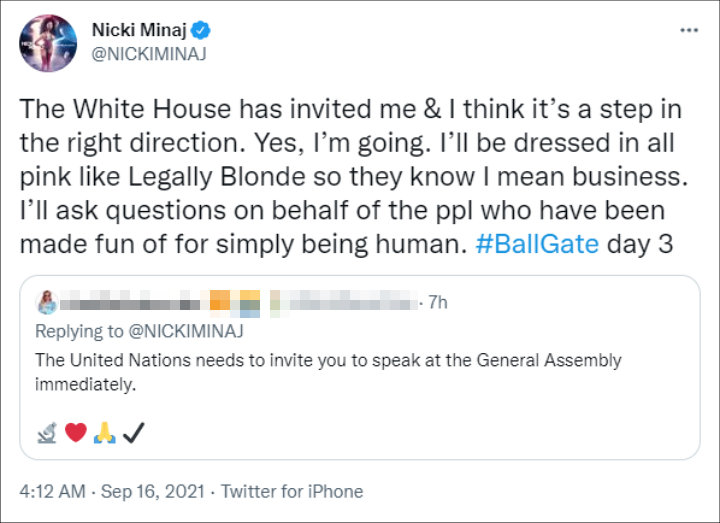 Nicki Minaj claimed that she's 'invited' to the White House.

Nicki landed in hot water after making claims about the vaccines. The "Starships" rapper, who just claimed that she's in "Twitter jail," first made her statements in a series of tweets to explain why she skipped the 2021 Met Gala.

"They want you to get vaccinated for the Met. if I get vaccinated it won't for the Met. It'll be once I feel I've done enough research. I'm working on that now. In the meantime my loves, be safe. Wear the mask with 2 strings that grips your head & face. Not that loose one," Nicki, who tested positive for the virus, wrote in one tweet. In a separate post, the "Anaconda" hitmaker shared a bizarre story about her cousin's friend in Trinidad who "became impotent" after taking his jab.

Upon learning her statements, Dr. Anthony Fauci debunked her claims during a CNN interview. "There's no evidence that it happens, nor is there any mechanistic reason to imagine that it would happen," the nation's leading infectious disease expert said. "So the answer to your question is no."

"There's a lot of misinformation, mostly on social media, and the only way we know to counter mis- and disinformation is to provide a lot of correct information," he added. "And to essentially debunk these kinds of claims, which may be innocent on her part. I'm not blaming her for anything but she should be thinking twice about propagating information that really has no basis, except as a one-off anecdote. That's not how science works."