AceShowbiz - Nicki Minaj has denounced Twitter following numerous backlash she received over her COVID-19 vaccine stance. The Trinidadian-born rapper claims she has been placed in "Twitter jail" following her controversial tweets.

Moving to Instagram to voice her thought, Nicki posted on her Story on Wednesday, September 15, "I'm in Twitter jail y'all. They didn't like what I was saying over there on that block." She added, "I guess my poll was gonna be… Asking questions is OK. I like being fkng dumb. Then boom. Can't tweet." 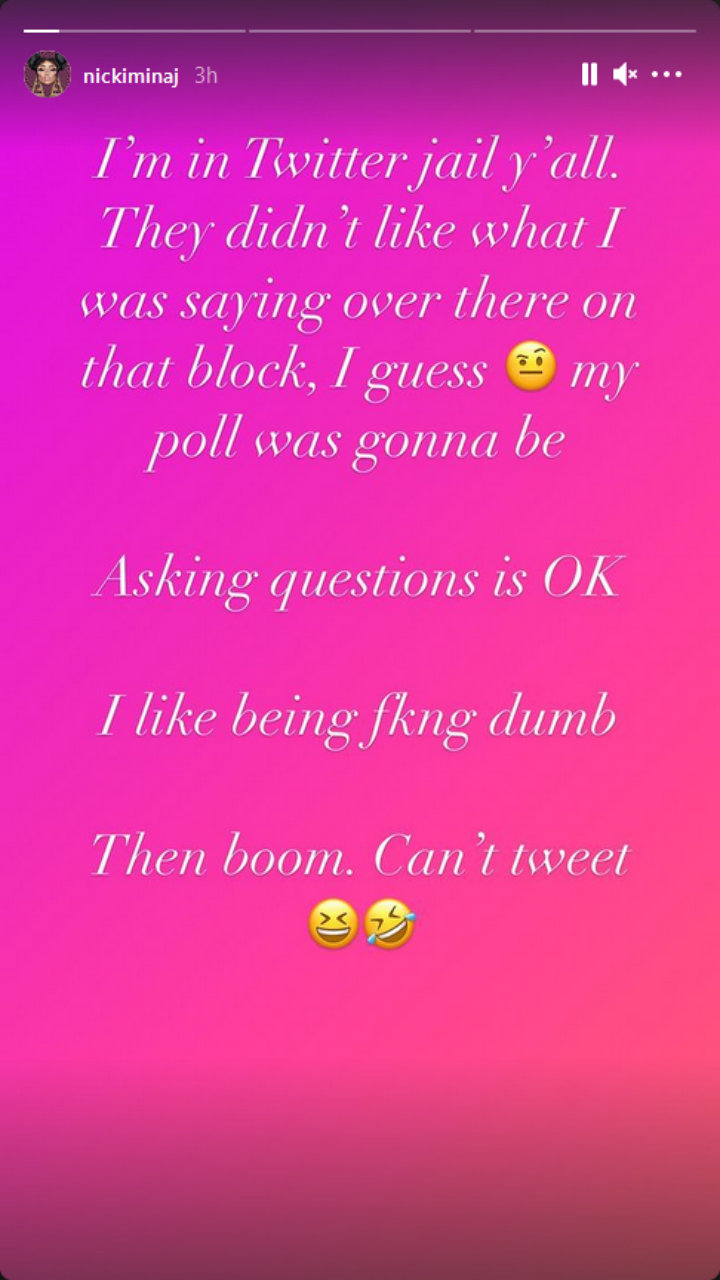 Nicki Minaj says she has been placed in 'Twitter jail.'

Despite Nicki's claim that she has been placed in "Twitter jail," the company has not taken any actions into her account. Her account is still up until now as she made her last activities on it four hours ago. On Wednesday evening, a Twitter spokesman additionally told Buzzfeed, "Twitter did not take any enforcement action in the account."

Nicki also went on Instagram Live to vent her frustration over the drama. In the video, she repeated her claim about the Twitter suspension. "I have been suspended from Twitter," she said, over a shot of what appeared to be an apartment ceiling. "Twitter, a place where people say the most horrific things every day."

She likened the scrutiny to the situation in China, where people are barred from talking about the government. "Don't y'all see what's f**king happening? Don't y'all see that we are living now in that time where people turn their back on you for not agreeing," she argued. "Where people will isolate you if you simply speak and ask a question."

"I will never use Twitter again," she declared, before defending herself, "I didn't give any facts about vaccines." She went on asking, "But what in the world scared y'all that much that made you disable my f**king Twitter?" The 38-year-old stressed, "I have not put out anything that I said was a fact about anything. And it's scary when they start telling you you can't ask question about anything."

Nicki has been heavily criticized for making baseless claims about COVID vaccines. After admitting that she skipped the 2021 Met Gala because she refused to get vaccinated for the event, she claimed that her cousin in Trinidad had a friend whose testicles became swollen after getting the jab.

Her tweets have been dismissed as misinformation by many, including top U.S. COVID expert Dr. Anthony Fauci who told CNN, "There's no evidence that it happens. She should be thinking twice about propagating information that has no (scientific) basis, except as a one-off anecdote. That's not how science works."