Candace is being sued for accusing the former Republican congressional candidate of campaign fraud, money laundering, illegally using drugs and being a 'madame' of a strip club.

AceShowbiz - Candace Owens is not afraid of forthcoming legal battle with Kimberly Klacik. Having found herself being sued for defamation by the former Republican congressional candidate, the conservative commentator laughed off the $20 million lawsuit.

The 32-year-old took to her Twitter account to share her reaction. "LOLLL [two crying laughing emojis] Kimberly Klacik is a former stripper fraud who has me blocked on EVERY social media account since I exposed her shady FEC filings. She launched an obviously frivolous lawsuit (read it) about me calling her a 'madame' to distract/avoid questions about her FEC filings," she first penned.

"Every person who gave to her campaign should demand answers about where her money went - particular, to 'Fox & Lion LLC' as well as to 'Pearl Events'-. Any journalists who wants to be taken seriously should look into her FEC filings," Candace added. "It's the GOP story of the year."

After attaching a link to her June Instagram video for the root of the story, Candace noted, "She is also frivolously suing journalists who investigated this video and determined I was telling the truth." She concluded her message by writing, "Tick-tock, Kimberly Klacik!" 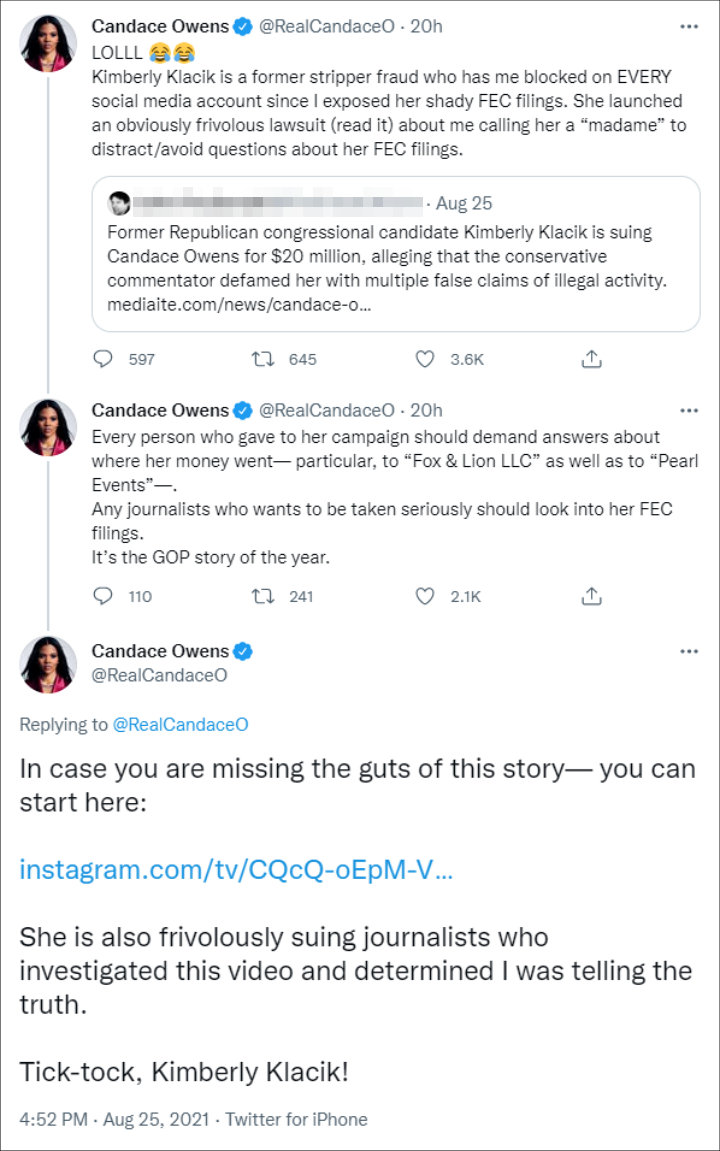 Kimberly has accused Candace of making false statements about her and her lifestyle in the Instagram clip. In the footage, Candace claimed that Kimberly was a "madame" of a strip club who commited campaign fraud, money laundering and illegal drug use.

The lawsuit stated that the back-and-forth between Kimberly and Candace began after the former responded to the latter's tweet. In the said post, Candace criticized President Joe Biden for declaring Juneteenth a national holiday.

"Sometimes I wonder when (if ever) Black America will wake up to the psychological warfare and perpetual brainwash to believe everything is racist," so read Candace's tweet, to which Kimberly replied, "Believe it or not, many in 'Black America' are very aware the fight is about classism rather [than] racism. Unfortunately, the loudest mouths with the largest platforms represent the majority. This might come to a shock to you because of your lack of engagement with black people."

Of the lawsuit, Kimberly's attorney Jacob Frenkel said in a statement, "Baseless character assassination has no place in political dialogue." Jacob added, "The defendant chose to use her huge social media platform to attack a respected Baltimore political figure; we are using the proper forum - the power of the courts - to respond. The detail in Ms. Klacik's lawsuit speaks for itself."

Candace Owens 'Banned' by COVID Test Site Due to Her 'Politics'