The concert set by the former Oasis rocker was initially scheduled for October 2020 as a thank you to healthcare workers who have put their lives on the line during the coronavirus pandemic.

AceShowbiz - Liam Gallagher's free show for the U.K.'s National Health Service workers will finally take place in August after it was delayed for a second time.

The former Oasis rocker's concert was initially scheduled for October 2020 as a thank you to healthcare workers who have put their lives on the line during the coronavirus pandemic.

But the continued COVID outbreak meant the show had to be pushed back to May 2021, before being put on ice again - and now he will finally take the stage at London's O2 Arena to share his gratitude on August 17.

Liam posted the revised concert date to Instagram on Friday, July 16, with the caption "So here we have it the rescheduled NHS gig at the 02 with mighty Primal Scream c'mon you know LG x [sic]."

Primal Scream and Black Honey will support Liam at the show.

The free show was initially planned to be held on October 29, 2020. In April that same year, Liam announced on Twitter, "It's an honour to announce that I will be doing a gig for the NHS and careworkers at London’s TheO2 on October 29th. They do an incredible job, we are very lucky to have them. LG x." 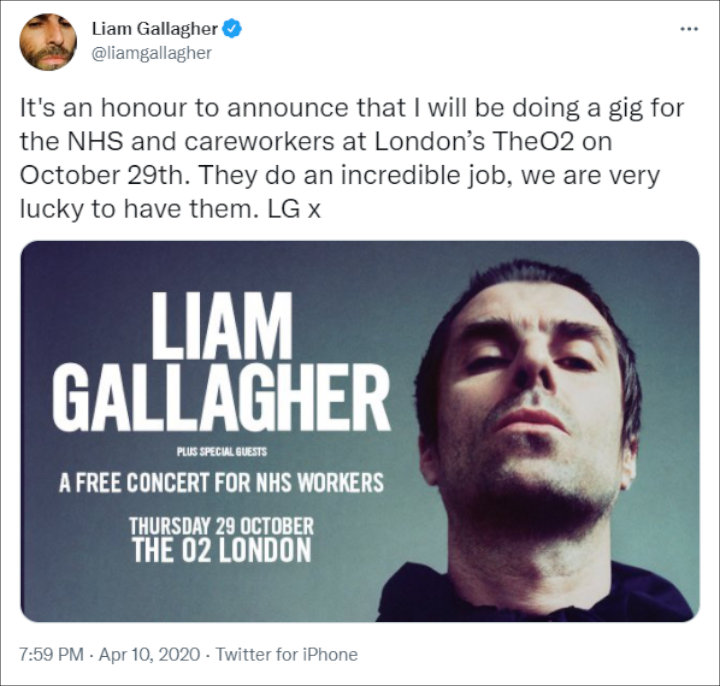 The new date for the free show came just days after Liam's son, Gene Gallagher, and Ringo Starr's grandson, Sonny Starkey, got a trial date for their alleged assault case against a shop staff at a Tesco Express store. Along with model Noah Ponte, the two are expected to stand trial in the spring of 2022.

KSI Weighs In on Losing Nearly $10M on Bitcoin: I Had to Experience It